Let’s just all agree that Home Alone is one of, if not THE, greatest holiday film of all time. In fact, it’s basically an iconic bit of movie history in general! Because, how can you get better than a movie written by John Hughes, directed by Christopher Columbus, and starring young Macaulay Culkin? Oh, right, YOU CAN’T! And during this time of year, we especially remember just how much we love Home Alone. Because one of our biggest childhood dreams was to also have the run of the house, setting up burglar-catching booby traps, and having a plain cheese pizza just to ourselves.

In summation, Home Alone is the greatest.

And, although we’ve watched this classic about a million and one times in our lives (okay, MAYBE that’s an exaggeration, but you get it), there are still little details that somehow fly under the radar. In particular, some very eye-opening behind-the-scenes facts!

And the one crazy secret that’s been ~hiding~ in front of us for all these years has to do with Buzz, Kevin’s nasty older brother.

As you PROBABLY recall, while Kevin is left…well, home…alone, he digs through big brother Buzz’s stuff. Because, who WOULDN’T, right?! And in his search for some fun things (and, you know, money to buy plain cheese pizzas), he happens across a photo of Buzz’s girlfriend.

But GUESS WHAT? That was not a photo of Buzz’s girlfriend, or even a GIRL for that matter.

That’s right, this is a photo of a boy! 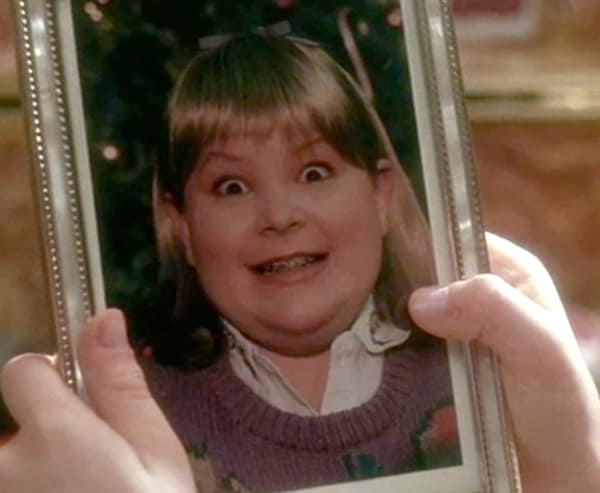 "The producers decided that it would be a little bit unkind to put a girl in that role of just being 'funny looking' and the art director had a son who was more than willing to volunteer for the part!"

LOL. What a trooper, major props to the art director’s son! We love hearing little known movie facts, particularly when it comes to some of our favorite films like Home Alone. ::holds hands to cheeks:: Aaaaaaaaaaahhh!