You know Keiko Agena as Rory Gilmore’s best friend, Lane Kim, from Gilmore Girls. But you may not know her as a writer, illustrator, comedic improviser, and all-around creative muse. Now, she can add yet another title to that list: published author. Her new book, No Mistakes: A Perfect Workbook for Imperfect Artists is finally here, and every mindful creative person needs a copy.

Being an artist or working in a creative field isn’t easy. It demands a lot of you mentally, physically, and emotionally. Some days, you inevitably hit roadblocks, feel stuck, and get lost in your own head. But No Mistakes will change the way you think about making mistakes. Agena encourages you to face the things you may consider imperfections and challenges you to see them as strengths and opportunities.

But she doesn’t just write prompts on the page and let you fend for yourself. She helps you put your creativity to good use, walking you through the process and encouraging you to reflect on your artistic journey.

Some pages of No Mistakes have writing prompts: “Make a list of the thoughts you attempt to hide because they are too weird.” Others have drawing exercises: “Draw a beautiful picture of an ugly dog or an ugly picture of a beautiful dog.” Many pages offer inspirational quotes, suggestions, and illustrations to color. And some will simply make you smile: “Fill this page with bubbles.”

As Agena puts it: “This book is the book I needed to read in order to be able to write this book.” 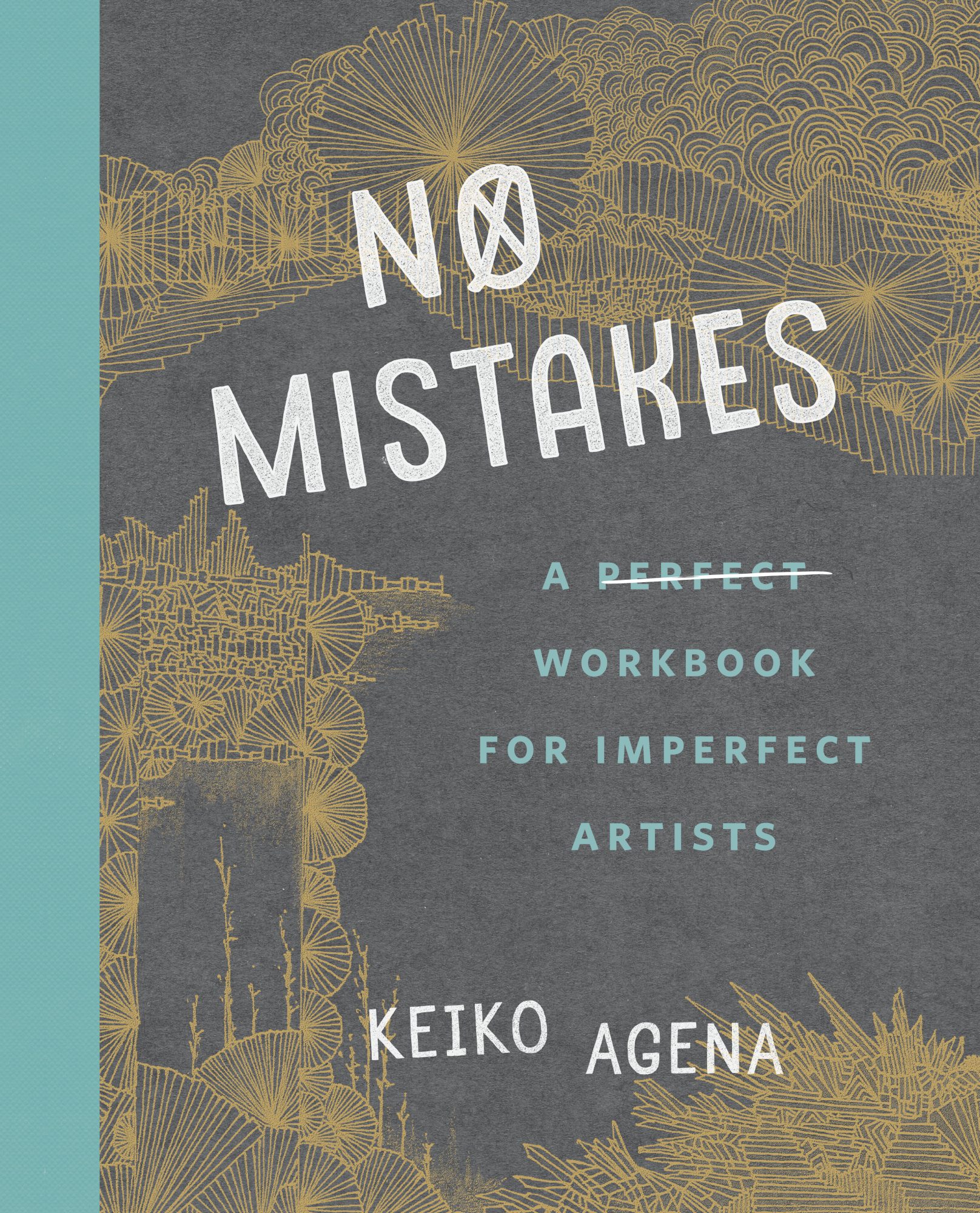 I spoke with Agena about the lessons she’s learned from improv comedy, the No Mistakes philosophy, and how to push through when you feel uninspired or defeated. Even if you don’t work in a creative field, No Mistakes is still an invaluable tool to help you understand and express your artistic voice.

HelloGiggles: Between acting and doing improv, when did the idea for the workbook come along?

Keiko Agena: The idea actually came about because I was doing the Gilmore Guys podcast. It started as an idea for an adult coloring book. But then it evolved into more of a workbook with other ideas, like writing prompts, drawing prompts, and quotes. As I went through it, I realized that whenever I got stuck trying to write the book, it sort of wrote itself. Any of the tools that I used to get over or get through difficult creative times, became that page in the book.

HG: I was going to ask how you came up with the prompts and exercises because they’re so original. You play with the space in such fun ways.

KA: I started with 10 ideas that I wanted to focus on. Those are the 10 different chapters. I don’t really mention it in the book, but the overall arc of it is three ideas: to discover your voice, accept your voice, and express your voice. Because that’s the type of thing that I look to when I’m reading these types of workbooks or manuals. That’s what I personally need.

I had a box where I kept scraps of ideas. I cut up 3×5 index cards from scrap paper and I would write down possible page ideas. I would write as many as I could and keep throwing them in the box. And then I would go through later, edit them, and see if there was a gem of an idea there. That was the process.

HG: When did you start embracing the No Mistakes philosophy for yourself?

KA: A lot of it is based in improv. The idea that you can be supported by other people and be embraced for things that are different is such a tenet of improv. There’s also something about my journey as an actress. I’m not necessarily someone that fits a particular kind of mold as an actress; I’m a little bit of a different type of actress. So I’ve always been interested in the idea of, How can I celebrate what makes me different, and embrace it, and treat is as a positive? instead of attacking what doesn’t fit some pre-designed mold. Both of those things flowed into what I wanted to enhance in myself, and then also to share with other people. It’s a gift if people can accept those things in themselves that make them different.

HG: In No Mistakes, you mention that other people are an important part of being an artist. People often forget that you don’t have to go it alone.

HG: You just mentioned vulnerability, which is such a big part of being an artist that we don’t often talk about. How can people embrace the No Mistakes philosophy when they’re feeling vulnerable, but don’t have the workbook in front of them?

KA: There’s a little bit of recognizing the tone of the internal voice. We’re always talking to ourselves. That’s where the feeling comes from—in response to hearing that internal voice and the tone of how it is speaking to us. First, pause for a second if you can. Take a breath and analyze that voice and the sound of it objectively. Take a step away from it.

Once you can recognize how it’s sounding, then you can have a choice in how you treat it. Do you embrace it? Do you put it somewhere sacred in yourself? Or do you try to continue to distance yourself and be aware of how it actually sounds, and not have it feel like it’s so much a part of you? That’s something we can always do. Unfortunately, those voices are continual as we go through our day.

HG: My first ever improv teacher compared that negative internal voice to a radio station called WBEZ-FU. She said it’ll always be playing, but we can choose to turn the volume down.

HG: No Mistakes also outlines your approach to failure. You know failure is inevitable, so you do it, learn from it, and move on. How can people get comfortable with the moving on part?

KA: Fortunately—or unfortunately—in my profession, failure comes along fairly regularly. All of the auditions that we go on, there’s almost a rhythm to it, because there are so many of them. I realized my personal rhythm was, I’m stressed for a day or two before it, I feel TERRIBLE the whole day of it, and then I feel stressed and anxious for two or three days after it. This was a little while ago. I thought, Wow! That’s a lot of time and energy. [laughs] For each audition, that’s too much! But because it would happen so often, I observed it, almost like a scientist. I realized, After those three days, you’re fine. So let’s try to not have it be so intense for so long. Because you know eventually you’re going to feel fine. Maybe you can let it go a little sooner.

HG: When you address the reader in No Mistakes, you refer to them as a fellow artist. But not everybody feels comfortable calling themselves artists at first. What advice do you have for people who aren’t quite there yet?

The action of doing things is always going to be the best route to take, because the work will eventually speak for itself. But I will say that in those moments, as much as you can start to say it, it’s helpful. It’s almost by repetition. Try to take off the intensity and the excuses. We sometimes will say it, but then there are a lot of caveats or disclaimers that we put before or after. So through repetition, the better off it’ll be. Try to normalize the words that are coming out of your mouth.

HG: How do you define mistakes now, after writing the workbook? Do you think we cause mistakes, or that mistakes happen to us?

KA: There are a couple of different ways I’ve played with the idea of mistakes. One version of what I would consider mistakes are things that we do that we regret because it was unintentional, something from our subconscious. In that particular definition of how I view mistakes, I do think there are times where our gut is trying to communicate with us, so we will start to act out. If our gut is being ignored, then the acting out sometimes gets a little louder and more extreme. In that particular version of a mistake—not a flaw, but something where we’re doing things unconsciously—we can view that as a message of something that we want to have happen or change that we’re not addressing.

That’s one version of a mistake. The other mistakes are things that we notice about ourselves that are a little odd that we try to hide, but that really could be sources of pride or originality or joy for us if we would refine how we see them. I don’t know if that’s any clearer. It might be more confusing!

HG: No, I follow! In thinking about these mistakes, how do you suggest people use the workbook? Is the order of the 10 ideas symbolic?

KA: I would skip around. I’m a firm believer that there’s a reason why something is interesting to you in the moment. Just jump on it. And that goes beyond the book. In life, if you’re interested in or obsessed with something, great! Pick that one thing and go and do that. Don’t feel like you have to follow some sort of preordained, organized path. You’re going to get more out of a particular exercise that you’re interested in in that moment.

HG: Any advice for someone who has No Mistakes in front of them, but is having a hard time opening up?

KA: There’s an author that I totally credit with being an inspiration to me and definitely an inspiration to part of this book. Her name is Julia Cameron and she wrote this book called The Artist’s Way. There’s something called Morning Pages where you just journal. You don’t look at them, or you could even rip them up, shred them. So I would say—because I’m a little paranoid too, I’ll be honest—if it feels so personal and scary to go there, I would not write it in a book. Write it on a loose-leaf sheet of paper, be totally, totally honest and free with it, and then just shred it.

If it feels a little too raw to have it exist out in the world on paper just yet, that’s okay. But maybe next week you’ll feel different. And next week you can come back to it, and you can write it in a book, or you can take that action. But that’s exciting! If it feels that powerful to you, and that scary, that’s exciting. Something amazing is just on the other side of that if you can allow yourself to unlock that. That’s a huge barrier that is available to be explored.

HG: Do you have a favorite page or exercise in No Mistakes?

KA: I have different favorite pages sometimes. I guess can’t say the dedication. [laughs] Oh, I’ll say “Brokenhearted.” It’s one of my favorites because it IS hard when things don’t happen. Especially in a creative life where you’ve invested a lot into something, and for some reason it doesn’t work. It’s okay to take the time to say, This was hard. It’s totally understandable that it feels that bad and it feels that painful. It’s valid. You can write about it and talk about it and give it a nice space.

KA: This is a little bit of a cheat because I know her, but Yumi Sakugawa came out with a book called The Little Book of Life Hacks, and it’s just so adorable. She’s such a gem. That kind of artwork and that kind of lightness and that kind of spiritually is helpful, especially during stressful times.

No Mistakes: A Perfect Workbook for Imperfect Artists is now available wherever books are sold.