Relationship Goals I learned from “10 Things I Hate About You”

There was a veritable onslaught of memorable teen rom-coms in 1999, but 10 Things I Hate About You definitely reigns supreme. While it has all the classic tropes of the genre it also has a free-thinking riot grrrl, baby Joseph Gordon Levitt (MY LOVE), the Secret World of Alex Mack, and Heath Ledger at his most charming (R.I.P.). It is peak 1999 up in here. But more than that ensemble, 10 Things I Hate About You is a hell of a story about love… I mean, it’s practically Shakespearean!

That’s largely why my roommate and I decided to pluck it for our last blizzard Hot Guy Movie Marathon. I mean, of course the film has a buffet of hot guys, but watching a bad girl and bad boy make it workgives me #relationshipgoals as intense as one Mr. Patrick Verona.

So without delay, here is everything 10 Things I Hate About You taught me about dating, public decorations of love, and apologizing when bets go horribly, horribly wrong.

It’s understandable, and practical, to keep your heart guarded…but don’t let a tough outer shell keep you from enjoying your life.

So, the backstory on Kat’s bitterness? She basically allowed her father to imprison her and Bianca because of a brief Joey fling back in freshmen year, thinking that the distance from the social scene would be for the best. “Not all experiences are good, Bianca,” she explains  “You can’t always trust the people you want to.” Truth. But her abrasiveness and negativity holds her back, isolating her and nearly keeping her from the dreamy Mr. Verona.

…actually all things considered, it’s totally fair that Kat defers Patrick’s initial advances, because yeah, he’s getting paid to take her out. But oh my god, come on, have you seen that smile? Like, even if he’s not at all trustworthy, you want to give him a chance.

Don’t let anyone make you feel like you don’t deserve what you want.

This is, verbatim, the advice Patrick gives Cameron, and it is a solid soundbite of wisdom. When you are sensitive, slight and burdened with low self-esteem (me, me, me) going up against romantic competition is rough. Even if you’re comfortable shooting for the stars, you hit a wall when it appears that your crush may have designs on that mega-popular idiot model. 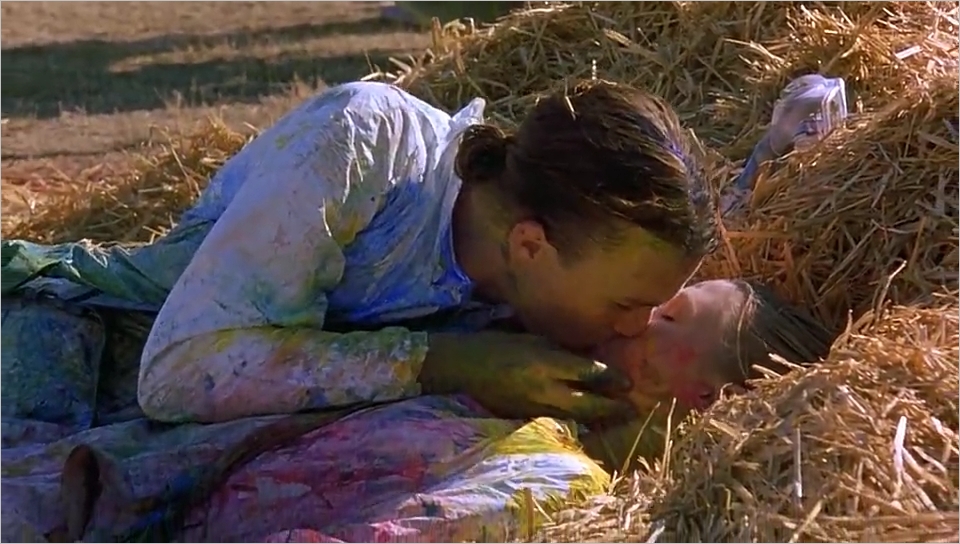 Nothing your boyfriend does for you will ever live up to Patrick Verona’s grand gestures.

And I’m a ride-or-die JGL girl for life, but I have to say, it’s Heath Ledger’s movie. You, me, my roommate, and my mom have all fallen hard for him during that “Can’t Take My Eyes Off Of You” scene. That is a hell of a way to make up for humiliating a girl, and those high kicks! So impressive!

Follow that up with the painfully adorable paintball montage to “F.N.T” and you feel, as my roommate uttered, that you’re totally going to die alone. YOU PROBABLY WON’T, but I understand that feeling. It’s the Heath Effect.

Avoid getting involved in any bets to woo a someone, just in case you accidentally fall in love with them.

Because they will find out, and they will probably find out on prom night, and then what?

If you need to express your emotionally duress when you find out the guy you like took you out as a bet, a poem works well.

Kat’s poem is particularly earnest and heart-wrenching though, because this was the invulnerable girl in school being vulnerable with the school’s most invulnerable boy. That poem, whether it’s good or not (I’d give it a generous B+ for that twist ending, maybe) is certainly effective. So yeah, I think professing your feels in written word is a good thing sometime. I’m not sure if you want to go full Kat Stratford and, you know, burst into tears, run out of the classroom, and make everyone around you feel profoundly uncomfortable.

Finally, if you DO have a bet-related fall out that made someone break down in English, a good way to make peace is with musical instruments.

You can start with guitar, and from there there’s always drums, and bass, and maybe one day a tambourine…