7 Reasons everyone should be watching “Catastrophe” on Amazon right now

Let’s be real, Amazon series Catastrophe may be one of the most underrated shows currently airing. The series — which was created by, written by, and stars Rob Delaney and Sharon Horgan — centers on Rob, an American businessman and Sharon, an Irish schoolteacher, who have a one week fling in London and accidentally get pregnant.

Despite being a hilarious sitcom, the show is never afraid to touch on the uncomfortable realities of life, from dealing with addiction to everyday financial insecurity. Plus the writing on the show is so good, Delaney and Horgan have won a BAFTA TV Award, also earning Emmy and Peabody nominations. 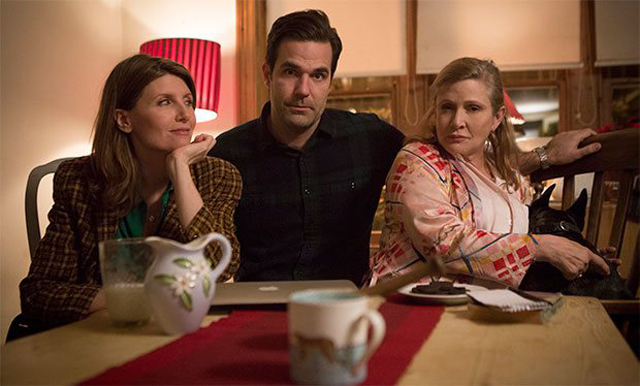 Despite being one of the best comedies shows, somehow Catastrophe has largely gone unnoticed. The show’s third season hits Amazon Prime on Friday (April 28th) and it’s something we should ALL be watching. Let me tell you why.

1. The premise is ridiculously brilliant.

After their whirlwind week, Rob returns to Boston and he and Sharon move on with their lives. When Sharon finds out she’s pregnant, she’s realistic about her age and the dwindling time to become a mother, so she and Rob decide to raise the baby together — besides, they did kind of like each other. It’s both wild and hilarious.

2. The show tackles the realities of moving in with a significant other.

When Rob relocates to London, he and Sharon move in together and they quickly get sick spending every waking moment with each other. They struggle to tell each other how they really feel so we get to watch as Sharon and Rob discover each other’s major quirks. This may be the most realistic portrayal of moving in with a significant other *ever*.

Carrie plays Rob’s mom, Mia. She’s as zany and fantastic as you would expect. Mia constantly offers Rob and Sharon unsolicited advice and while she doesn’t appear in every episode, every time Carrie pops up on screen, she delivers. She had just completed her work on season 3 when she passed away in December so this upcoming season will mark her final appearances.

4. Their “I don’t know why we’re friends” friends.

Fran and Chris are the closest couple friends Rob and Sharon have. Unfortunately, they have next to nothing in common besides feeling constantly annoyed by Fran. On their own, Fran and Chris are a hilariously bizarre twosome. As the series progresses, their friendship continues on its path to mutual doom in the most hilarious way possible. Also worth mentioning is Dave, Rob’s American friend in London who, despite being the worst friend in existence, is someone Rob can’t quite shake.

In the first two seasons, Rob and Sharon are faced with some really serious issues, from potential complications with Sharon’s pregnancy to the health decline of Sharon’s father. Despite the seriousness of the issues they face, the show uses humor to help Sharon and Rob process, without cheapening the seriousness of the situation.

6. Sharon’s desperation to find a Mom-friend.

By the time Sharon and Rob have kids, most of the other parents with babies are much younger than Sharon and she struggles to fit in. Still on maternity leave, exhausted, and finding most of the other moms to be weird, she becomes desperate to make friends with another mom. While I’m not a parent, it feels like one of the most relatable parenting moments on earth.

7. It’s not a colossal commitment.

This isn’t exactly a reason but seriously, each season is only SIX EPISODES. Like most British shows, the seasons are short so they don’t have weird filler episodes that don’t add anything to the plot. The series is both watchable, short, and will not take you a thousand years like the 300 seasons of Grey’s Anatomy you’re about to begin. There’s *literally* no reason to not watch this show.

It’s fun, it’s British, and features all the ups and downs that come with life, so what’s not to love? Catastrophe hits Amazon Prime on Friday!