Ending student hunger on college campuses across the United States is a an immense and incredibly important feat. But if there’s anyone up for the task, it’s Rachel Sumekh and her team at Swipe Out Hunger.

Swipe Out Hunger is a non-profit organization dedicated to helping college campuses implement effective solutions to end hunger among their students (namely through meal credit donation programs). HelloGiggles was lucky enough to hop on the phone with Rachel Sumekh to discuss the non-profit’s evolution, their dedication to ending student hunger, and her own experience as a first generation Iranian-American Jewish woman in business.

HelloGiggles (HG): Could you elaborate on what inspired the idea of “Swipes for the Homeless” back in 2009?

Rachel Sumekh (RS): When it first started, it was very much motivated by the feeling of having so many meal points and the frustration of having them go to waste at the end of the semester, and wanting another option instead of following what the school recommended, which was to buy a bunch of water bottles with the extra money. So we decided to go into the dining hall, buy food, and walk out onto the street, handing it out to people. It was only when [UCLA] stopped us and said, ‘You can’t do this on campus’ that we developed a partnership with them where students were able to just donate a dollar amount. That model is what eventually allowed us to expand beyond just “Swipes for the Homeless” and realize the population we were serving was dominantly food insecure hungry people. The name changed to “Swipe Out Hunger.” 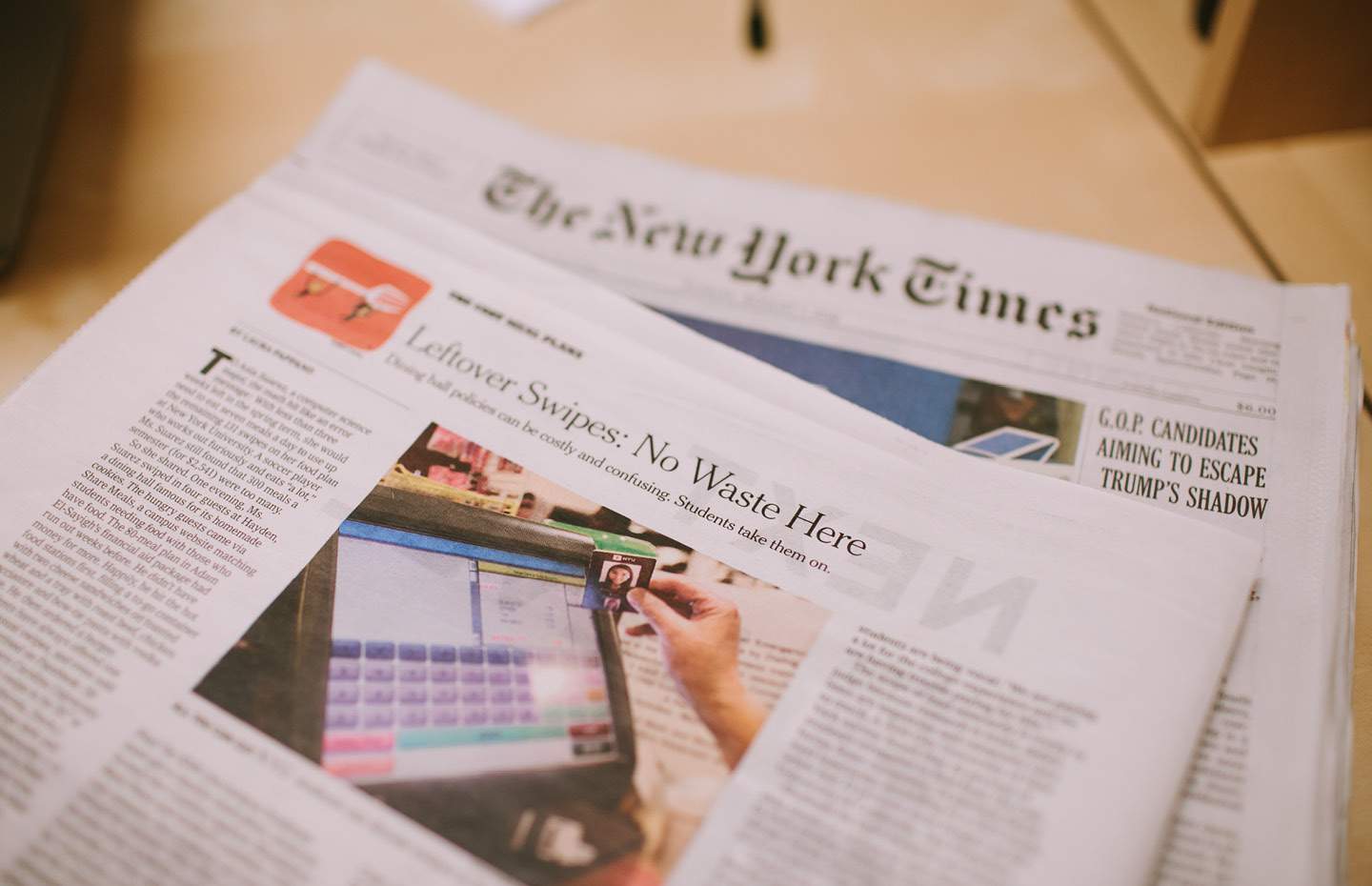 HG: Can you describe the growth process from those early days to what the company is now?

RS: The original program got off the ground in 2009, and by 2010, UCLA acknowledged that what we were doing was okay, and they were going to partner with us. We got to 1,000 meals, and by that time next year, we were up to 15,000 meals. The partnership truly helped us scale dramatically. And that was 15,000 meals being collected in one week at one campus. By 2012, we had this insane moment where we were invited to the White House. President Obama greeted us in a small room with a couple of other college students who were working on their initiatives and he called us champions of change. There’s this kind of feeling that you have in a moment like that — we were seniors in college, it was finals week, we hustled and raised money to fly our entire team out — I had this feeling of, ‘Wow, what I’m doing is not just a kid breaking the rules.’ But what we were doing resonated, and it went beyond our campus, beyond myself, beyond our city. It started to expand our lens of what was possible. Once we got back to campus, over 30 universities heard about us through the press.

We all graduated in 2012 and went off to get jobs and were working on this voluntarily after hours. The interest was just pouring in — seven or eight schools every month were asking us how to get started. I had moved to Chicago from Los Angeles to do a year of service through AmeriCorps and realized that direct service wasn’t my jam. But when I would come home and spend time on the phone with a passionate college student who was trying to get this started on their campus, I was so fulfilled. I decided as my year of service was coming to an end to move back to LA, and see what would happen if I spent 40 or 50 or 60 or 70 or 80 hours a week on this and see how it would grow. That was four years ago — last week was my four year anniversary — and the growth we’ve seen has been insane, both in terms of the new university partners and the amount of impact we’ve been able to have.

HG: How did you go from giving out food to the homeless, to serving students?

It happened in 2014. When we were about to hit our one million meals served, I asked myself, have we actually ended hunger though? What does a million meals mean if I haven’t made a dent in this problem? We asked ourselves, ‘How do we make sure that these meal points are truly impacting something?’ We launched a program where, when I’d donate a meal, it would go from my account to the credit of a student ID of a student who was hungry. It was always a part of our work, but it wasn’t a priority. In 2014 we decided, ‘What if we shifted all of it towards ending student hunger?’ Because not having access to food might mean doing poorly in classes, or not going to class, graduating with a lower GPA, not graduating in four years. The impact was so massive that we figured this would be a way of making sure people could graduate in four years and move on, and not have to drop out or suffer their way through. 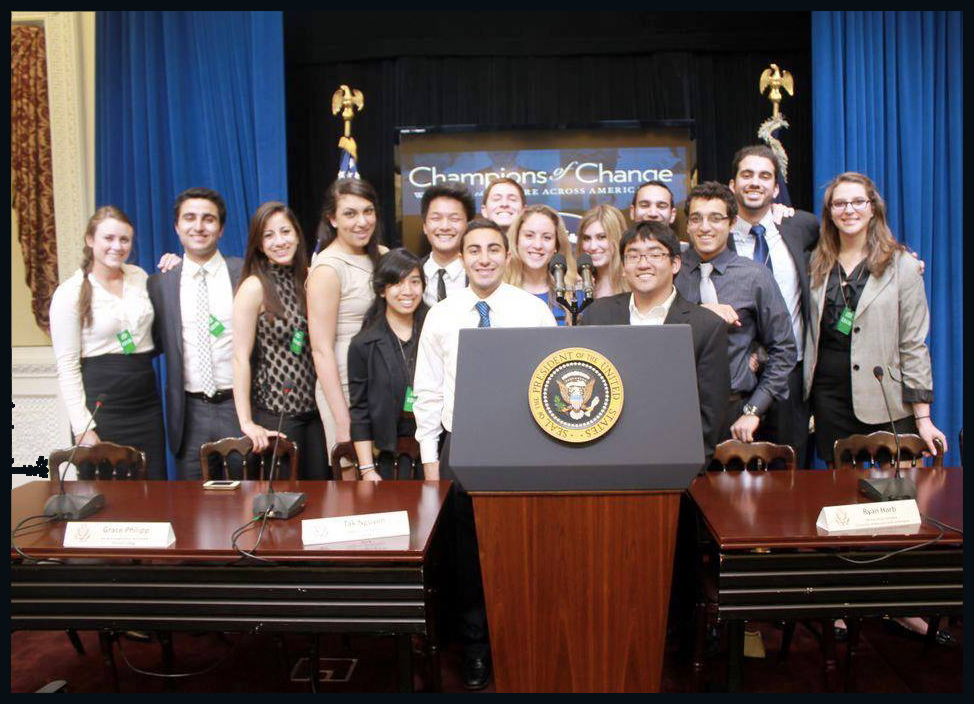 HG: When you started this in 2009, did you have any idea it would become what it has?

RS: Oh, not at all. The best part is that it wasn’t even my idea, it was my friend Brian’s idea. He posted on Facebook about it and I was like, yeah, that sounds cool, I know how to use Photoshop, I can make the flyers. I show up to the [meeting] and no one else showed up; it was just me and him for five or six hours moving food across campus. It triggered something in me, as someone who believes in leadership and empowering others to get involved.

HG: How did Swipe come to partner with WeWork, and what has that partnership been like?

RS: When I moved back to LA and decided to launch this full-time, we joined a lofty, grungy start-up co-working space in downtown LA’s arts district. It served us well, but it got to this point where I felt like we were a butterfly that had lasted in it’s cocoon for too long. So we started touring office spaces and we came to WeWork and I was like, this is it. Everyone here feels like they’re moving 100 miles an hour and not settling. Within a couple of days, we became a member, and that was in December 2016. Having access to both this environment and the far-reaching visions and perspectives of our neighbors has been really wonderful. It’s like, in what world would a small non-profit have access to this? Only in one in which WeWork thinks that real estate should be accessible to everyone, even if you don’t have the capital yourself.

HG: So, what’s next for Swipe? Where do you hope to go from here?

RS: We had a crazy moment a couple of months ago when a State Assembly Member from California called us saying she wanted us to help her write legislation. We helped draft something together, and over the summer, we got our bill passed and made it into the budget. It allocated 7.5 million dollars to California campuses to help launch our program and other hunger-fighting programs on campuses. Which is just like, insanity. What is a 25-year-old doing writing legislation, nevertheless the state adopting it and putting so much money behind it? It was a huge moment for us.

Beyond that, we are noticing a huge trend in attention around this issue of college student hunger. It affects 1 in 4 college students. In community colleges, it’s even more drastic. As the attention around this issue is growing, we’re trying to hype it up. Administrators need to shift their perspective that the cost of college isn’t just tuition, it’s also room and board, it’s books. We need to view the cost of college holistically so we can properly quote people and properly give out financial aid. A big part of our goal is shifting the public’s understanding of this. 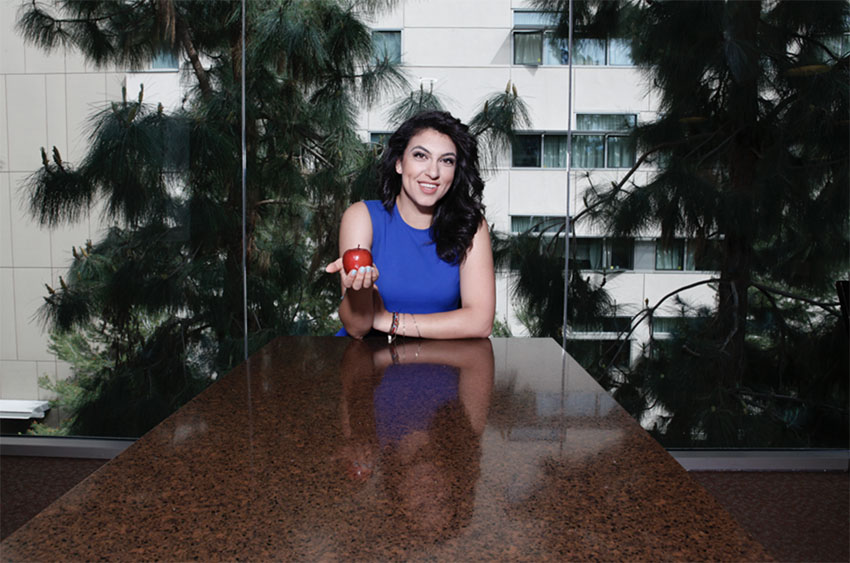 HG: What can other businesses, as well as individuals, take from the example Swipe is setting when it comes to food waste?

RS: I would say that the resources around us are also the solutions to the problems around us as well, like the way we reexamined our meal points and tapped into them and used them for good. You can even see the parallels with WeWork. It’s not about building new buildings, it’s about considering how to be smart about this and use the resources around us, like this massive three-fourths of a law firm that no one wants anymore, and repurposing those resources to meet the needs that we have today. My message to anyone in the social impact space, or anyone in general, is:

What are the resources around you, or what are the practices you're employing, and how do you see them in a new way? What would be the first step to make that change happen?

Because we can’t create more stuff. We all know the ocean is full of our trash. We need to stop building more things and start using our current resources.

HG: As a woman, working and building this business, what has your experience been like?

RS: In 2013 when I told my co-founder that I wanted to become our full-time staff person (because I knew we needed someone), his response to me was, ‘Oh, I always thought you were too nice to be a leader, I never saw you in that role.’ As his co-founder, as someone who saw myself as a leader, it was heartbreaking. But having my mentor come in and say, ‘No, there’s no one more qualified,’ and moving back to LA to do this was like saying, ‘No, you can be really nice, and you can be a leader.’

One of the biggest turning points for me was focused around wardrobe and how much time I had to spend picking an outfit that was professional, but wasn’t too short, but was still fitting and flattering, and looked like a 25-year-old, but also looked mature. The amount of stress it would cause me led me to walk into meetings already on edge. Realizing that no one is telling me I have to look that way — maybe society told me that subconsciously — but shedding those preconceived notions has been the best. Like right now, I’m wearing a dress with high-top converse. I have to constantly remind myself that I don’t need to conform. As I need to command power and stay focused on my work because there is so much going on, the last thing I need is any of those constraints.

I’m also a first generation Iranian American Jewish woman. One of the biggest things that propels me forward is to tell my story so that other young women who might come from minority backgrounds also can understand that they can still love their identity and culture. I still hang out with my grandma every week, and I speak Farsi and read it and write it and cook it. But I also still have a business that I’m running. You’re able to have your culture and you’re also able to have something new. You don’t have to have that fear that you can’t have both.