Rachel Bloom made a music video about hating award shows, and LOL

Because she’s currently front-and-center thanks to her smash hit Crazy Ex-Girlfriend, actress Rachel Bloom decided to get vocal about award shows. And, we mean it when we say “vocal.” The actress and writer created a brand new song which talked about why campaigning for the big events doesn’t mean much to her.

"Campaigning for award shows is tacky and desperate and I. WON'T. DO. IT," Bloom captioned her brand new video, which she uploaded onto YouTube.

In her head, the shows have nothing to do with art.

Humorously (and flawlessly, might we add) she pinpoints that she doesn’t need the “shallow praise.”

We think it’s pretty fantastic, since it’s a subject that not many actors have acknowledged before. And, this year it seems like Bloom isn’t alone. For example, the cast and crew of Mom decided to donate their campaign budget to Planned Parenthood this year, which is a pretty inspiring move.

Of course, Bloom’s funny video kind of proves that if she did happen to win an award, she’d be totally honored and prepared. 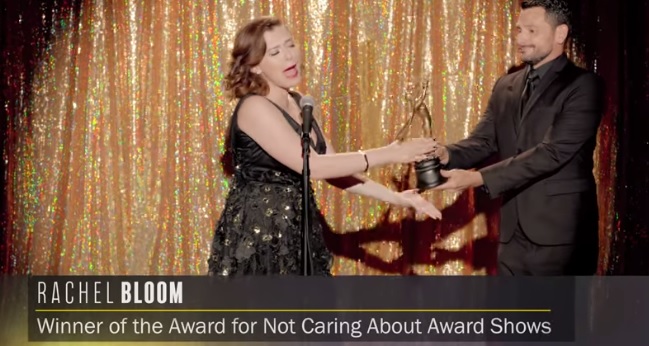 We definitely think that Crazy Ex-Girlfriend deserves a lot of recognition. The show, which has been airing since 2015, has received nothing but acclaim from fans and critics. Plus, we think Bloom would have a killer speech prepared. Rachel Bloom for Outstanding Lead Actress in a Comedy? Yes please.