This morning when TV chef Rachael Ray woke up, we’re pretty sure she wasn’t banking on being drawn right into the middle of an angry Beyhive. But that’s exactly what happened to the unsuspecting Food Network star after a very simple mix up.

A bit of background first: If you’ve watched or listened to Lemonade (which you definitely, definitely should), you know that one of the many, many reactions to Beyoncé’s new album is a perception among fans that the whole thing is about Jay Z’s supposed infidelity. And according to gossip blogs, Jay’s co-participant in the alleged infidelity is one Rachel Roy, a fashion designer and ex-wife of business mogul Damon Dash. See where we’re going with this?

The rumors about Jay and Rachel would have remained mere rumors if Roy hadn’t alluded to one particular line from Lemonade track, “Sorry,” — He only want me when I’m not there / He better call Becky with the good hair — on her Instagram.

But unfortunately, Roy wrote “Good hair don’t care…” in a now-private Instagram post just hours after the release of Lemonade — and in the process, she set off the Beyhive like never before. 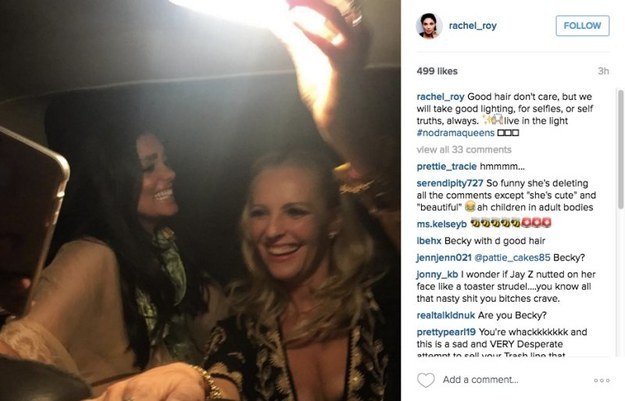 The situation quickly turned ugly for Roy. But the even more unfortunate victim in this whole situation? Poor Rachael Ray, who couldn’t be saved by the extra “a” in her first name or the “a” in her last name from a very, very messy case of mistaken identity. Before long, Beyhive members were swarming her social media accounts, not realizing their mistake until it was way too late.

Ouch. Let’s just say that, today, we all learned an extremely valuable lesson in checking your facts before you lose it on social media. In fact, here’s hoping that everyone involved in this whole mess, gets the benefit of the doubt they deserve.