Nature never ceases to amaze us. From deep-sea monsters to the adorable, pink axolotl, there is no shortage of mind-boggling wildlife to discover. And sometimes, even familiar species can surprise us. Scientists have known about Atlantic puffins for years, but they only just discovered that puffins’ beaks glow in the dark.

British ornithologist Jamie Dunning accidentally made the discovery in January while procrastinating in his lab. Dunning had decided to shine an ultraviolet light on a dead puffin specimen (as you do), and suddenly realized that the bird’s colorful beak looked like a glow stick. The two yellow ridges on the puffin’s beak — known as the cere and the lamella — were emitting natural fluorescence, meaning that they absorbed UV light and released it as a vibrant glow.

Dunning was startled, and he decided to try the trick with other dead birds in his freezer. But the effects were much less impressive than they were with the puffins.

"We saw a little bit of fluorescent red in the goldcrest and the firecrest," Dunning told Newsweek, “but to be honest it’s barely detectable, and nothing like the Atlantic puffin." 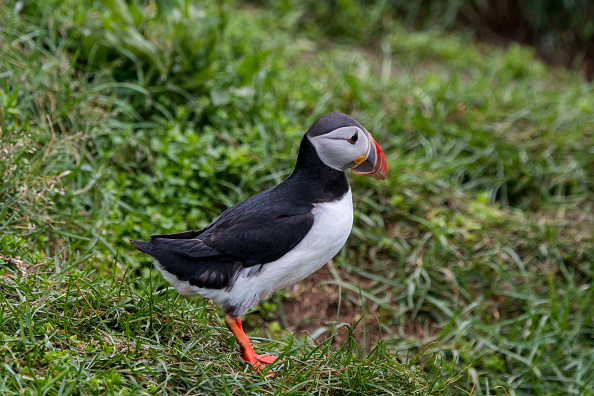 Dunning’s accidental finding has led him to continue studying puffins’ beaks. He has even designed special sunglasses for the birds so he can examine live animals under the UV light.

Dunning is not sure what purpose these birds’ bright lights serve, but he wrote on Twitter that he suspects it has benefits when it comes to finding a mate.

Fluorescence isn’t the only remarkable thing about puffins’ beaks. Most birds have tetrachromatic vision, meaning that they see four kinds of light: green, red, blue, and UV. Humans can’t see UV light, so we don’t know what the glowing beaks look like to the puffins themselves, but there’s a chance that they could be seeing a totally different color. false

We can’t wait to find out what else Dunning learns about these glowing birds. But until then, we’ll just have to satisfy our curiosity by watching wildlife from afar.