The Dixie Chicks are on tour (for the first time in 10 years!) and here’s where we can see them play

A month ago, the Dixie Chicks went viral for a couple of reasons: (1) They delivered a wonderful cover of Beyoncé’s “Daddy Lessons;” and (2) they were performing the cover on their first tour in 10 years.

That tour is their DCX MMXVI World Tour, which finally came to the U.S. yesterday, and is more in support of the band’s truly stunning success than new material (which they haven’t delivered since 2006). It also proves that the band is not on the brink of breaking up as if often rumored.

“It answers the biggest question, the elephant in the room, which is ‘Have the Dixie Chicks broken up?’” co-founder Emily Robinson told The Oakland Press. “To us it’s almost the perfect, ‘Shut up! Stop asking! Believe us when we say we’re still together, we’re just not working right now.’ So it just kind of helped us do that.” false

But as lead singer Natalie Maines points out, the reason the group hasn’t put a new album out since 2006’s Taking The Long Way Home is mostly because she hasn’t felt like going back into the studio for a long time. Accordingly, the group’s two other members, Robinson and her sister Martie Maguire created their own project, Court Yard Hounds, freeing Maines to go solo. 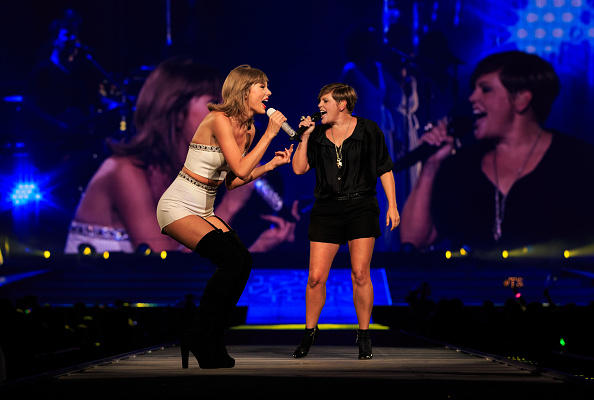 “I’m glad they were doing that because I felt like everyone was waiting for me, and I felt a lot of pressure,” Maines said in the same interview. “I know they have such a need to do music, and I didn’t like feeling responsible for taking that away from them. And then I could do [a solo album] without feeling like I was cheating on Emily and Martie.”

Luckily, she’s feel positive enough about the group to go on tour. Tomorrow, June 3, the Chicks will play in Cuyahoga Falls, OH before heading out on the next 54 dates of the North American leg of their tour, which ends with a performance at the Hollywood Bowl on October 10. Check out the whole tour list below.