I am a proud bisexual woman, even if I choose to keep it private

October 11th is National Coming Out Day. Here, a contributor shares her experiences with bisexuality and challenges the stereotypes and fetishization she has encountered.

I vividly remember the first time I was attracted to a woman. It was really late at night, and my parents were asleep. I stumbled upon HBO, and the film Gia came onscreen. There was a shower scene between Angelina Jolie and another female actress. I couldn’t have been older than nine, and I watched with rapt attention. They were gorgeous. They were sexy. And I was having feelings that had previously been reserved for JTT (Jonathan Taylor Thomas) and Devon Sawa.

I never talked to anyone about that moment because I didn’t know how to bring something like that up. I didn’t want people to think I was weird. I knew that I liked boys, but I was also attracted to girls. Back then, I didn’t know what to call it. There was no Google yet, so I couldn’t even try to find out discreetly.

I first discovered my feelings had a name when I was in high school.

As a teen, I gave myself more space to privately figure out those feelings. One wall of my bedroom was strictly devoted to my female celebrity crushes — mostly Christina Aguilera. Because I was a fan of her music, no one seemed to question anything. No one would have guessed that, late at night, I secretly read girl-on-girl fan fiction.

Allowing myself to have an outlet, however private, made me more secure about my sexuality.

Exploring it validated me, but I still didn’t want to tell anyone. My best friend’s family once wondered if something was going on between the two of us, simply because we were physically affectionate with each other. We’d hug and snuggle while watching movies or TV. Even though I was attracted to girls, she was my best friend — I never felt that way about her.

Still, her family’s reaction led me to never tell her about my feelings for women.

While I often pursued guys, I had my first ever kiss with a girl when I was 17. We had met through a mutual school friend, and when I told her I’d never kissed anyone, she said that the next time we hung out, “we were going to fix that.”

“It’ll be like that scene with Sarah Michelle Gellar and Selma Blair in Cruel Intentions, she said.

I eagerly awaited the day of our next hangout, excited to finally have my first kiss. With butterflies in my stomach, we actually reenacted the scene from Cruel Intentions (we were both drama nerds, so of course we couldn’t just use it as a reference point).

Kissing her felt totally natural; I never once thought about the fact that we were both girls.

Kissing her confirmed what I had figured out all those years ago: I was definitely attracted to girls.

We never dated. To this day, she is still the only woman with whom I’ve ever had any sort of relationship. 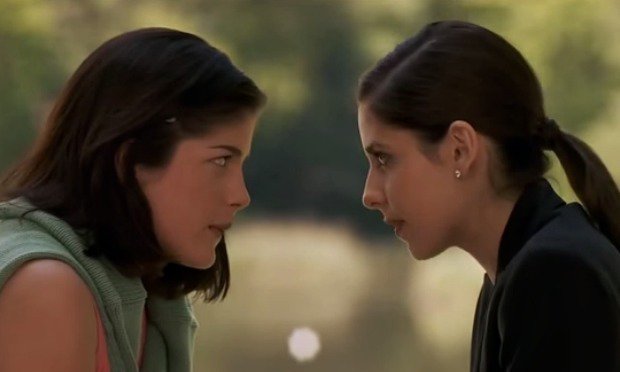 I was excited to tell my friends that I had finally kissed somebody. I was the last person in my friend group to have her first kiss, so naturally, I wanted to share my big news.

Because we’d never talked about my attraction to girls, it obviously came as a surprise.

I told them that, yes, I was — but their reactions made me leave out the fact that I’d actually known my sexuality for a while. Over the next year or so, my brief relationship with that girl became a joke amongst my friends.

I laughed along, but I only laughed because I was afraid to stand up for myself, to be okay with saying who I was out loud.

It was easy to embrace my bisexuality in the confines of my bedroom, alone with the wall I’d plastered with photographs of beautiful famous women. It was different when I was with my peers. Thankfully, one friend was totally supportive when I told her. There was never a questioning glance from her when I openly talked about it. She became a safe space for me.

In college, I exclusively pursued guys, though the thought of dating a woman always stayed in the back of my mind. But I was quickly exposed to the fetishization of girl-on-girl sexual encounters: Whenever I casually mentioned that I’d had a sexual relationship with a girl in high school, it was as if there was suddenly something more sexually intriguing about me. It made me feel pretty gross.

Guys asked much more invasive questions about my time with a woman than about any other part of my sexual history. Because I’m an open book and not ashamed of my bisexuality, I’d answer their questions — but always remained aware of their desire to make it into something so different from what it was. I was subjected to this line of questioning more than once by men, and took issue with the fetishization of female sexual relationships.

Kissing girls isn’t some cheeky, fun thing to do for the pleasure of heterosexual men.

I started hoping that maybe if I was super nonchalant about it, people would stop thinking my bisexuality was a big deal. I tried to mention it as infrequently and insignificantly as possible.

As an adult, I am still more actively pursuing relationships with men — but I think it’s simply because I’m not confident enough to initiate a relationship with a woman.

I still don’t tell many of my friends that I am bisexual, unless I feel really certain that they won’t turn it into a joke.

Recently, a friend who I have known since high school jokingly said, “Remember your bi phase?

It was never a phase. I am still very much attracted to women, but that lack of confidence stops me from going any further.

My parents still don’t know that I’m bisexual, mainly because I don’t think they’ll understand. Now that I’m a mother, I sometimes wonder if my chance to explore that side of my sexuality has passed. It’s still something I’d like to figure out, but I don’t know how to, or when. But even if I never have another relationship with a woman, that doesn’t mean my bisexuality is just a phase, or that I was only experimenting when I was young.

I am a bisexual woman.

No one else is allowed to tell me how I can live this experience. Bisexuality isn’t a party trick. Bisexuality doesn’t mean a person is confused. It is a valid way of existing. It is who I am, and I’m not ashamed of that.