Ciena Rae Nelson recently posted this insanely powerful “before and after” image of her psoriasis to Instagram: 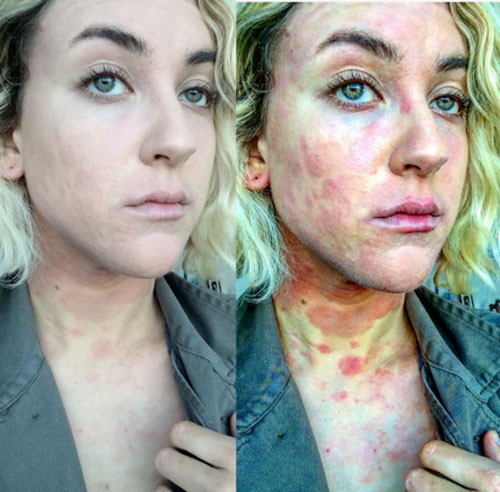 The image is meant to demonstrate what her skin looks like after she covers it up “as best [she] could” with makeup (left) vs. what it feels like to her (right). [Note: Nelson actually enhanced the saturation on the right image with Photoshop to show how intense the feeling truly is.]

The aspiring actor and artist has actually documented her struggle before: 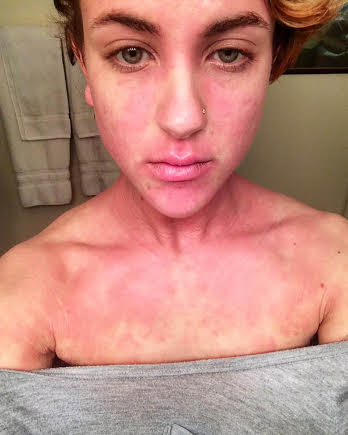 “This is me 2 years ago just before I went to the hospital for severe dehydration and a fever. Skin conditions are not cosmetic issues. They cause physical pain and suffering and oftentimes a feeling of being trapped in your own body, on top of the social anxiety many people face because of them.”

So, what is psoriasis actually? According to the National Psoriasis Foundation:

Currently, there is no known cause of psoriasis, however scientists do know that the immune system and genetics play a large part in it. Psoriasis is not contagious and the lesions it causes are not infectious. It is NOT something you can “catch”.

However, psoriasis can flare up from a variety of triggers including stress, cold weather, and other skin injuries (such as a cut, scrape or severe sunburn).

Nelson told HelloGiggles in more detail about her daily struggle with psoriasis, “…chronic fatigue, chronic itch. I cannot sleep many nights, which adds to my fatigue level and stress level, which makes me breakout worse.” She continued, “people think I’m flaky (no pun intended) because I don’t want to go out last minute depending on how I’m feeling. They don’t understand that I have to judge it day by day, and that they may not always SEE my disease but that doesn’t mean it doesn’t exist. (This is a struggle with employment and calling out of work as well). 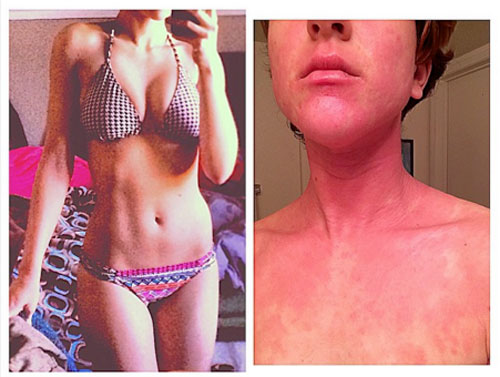 And she wants to let others with psoriasis know that they are not alone. “It’s hard to feel like a part of a community who can offer support […] when your disease is swept under the rug or hidden from the media.”

Nelson wants to remind other people with psoriasis, “No matter your hurdles, it matters what kind of community you belong to and what support you get from them. We should be open and honest about how imperfect our skin is as a culture.”

“Hydrate. Get enough sleep. Eat healthy foods. Nourish your biggest organ, and all of the rest while you’re at it.”

To learn more about psoriasis and what kind of diagnosis and treatment there is for it, visit the National Psoriasis Foundation site.