Planned Parenthood has changed my life. For almost a decade, and all of my adult life, Planned Parenthood and their various offices in Los Angeles have been my haven for women’s health care. They were there for STI testing and birth control pills while I was in college — the stress of a pregnancy would have definitely halted my graduation from college. They were there for me with my IUD placement when I was between jobs and my body wasn’t a fan of the Pill.

Most importantly, they were there for me with loving arms (literally) just a few months ago, when I anxiously got my first Well Woman’s Exam in over a decade.

Planned Parenthood is there when your parents might not be, when you don’t have a supportive friend, when you have no possible way to pay for yourself, and when you have no other trusted family planning services. As the statue of liberty says, “Give me your tired, your poor…” — Planned Parenthood is the modern American symbol of freedom and liberty. Their doors are open to anyone of any race, creed, religion, income, or sexuality. Their services are offered without judgement or discrimination.

It is a safe place for life planning — whether or not you want a family.

College was a rough four years for me. I moved out of my parent’s house and into a room with friends. We survived on five dollar pizzas and I would take what little jobs I could. I would tutor, I worked in production, and I even tried my hand (terribly) at sign spinning at an intersection.

Money that I’d scraped together went towards books and clothes. I would have never been able to afford healthcare — let alone birth control.

During my first couple years of college, like so many other young women (which is a terrible fact), I trusted the wrong people and ended up drugged and subsequently raped.

It was at a very hard time in my life; I had just lost my father and I was a mess. I wasn’t even sure if I had taken my birth control pills that week.

Planned Parenthood will provide you with Plan B and STI testing, no invasive questions asked.

Without Planned Parenthood and the services they gave me, I would have likely ended up pregnant and leaving school to work full time to support my child.

I have been on about six different birth control pill types in the last decade. Some hormones just affect bodies differently than others. In the beginning of 2016, I turned 26 and fell off my stepfather’s health insurance. I was working multiple freelance jobs that didn’t offer many options, so once again, I turned to Planned Parenthood. I mentioned how the Pill was negatively affecting my mood and making me incredibly nauseous daily. PP was able to work with me to get me a Mirena, a low-dose hormone IUD.

IUDs had always scared me — I had read all those terrifying articles about copper and uterine scarring. My fears were put to rest when the copper-free version came out! The IUD makes it so I don’t have to remember a pill everyday, which is fantastic! It also cut down my nausea by about 90%. Thanks to Planned Parenthood, pretty much every day of my life is better.

When I received my IUD; I had to come clean with the nurses at Planned Parenthood — I hadn’t had a proper Pap smear check up since about 2008. In 2008, I was still seeing the gynecologist my mother went to, based on her recommendation. He was an older man who never made me feel comfortable. He had broken patient confidentiality years before by telling my mother I wasn’t a virgin. I was diagnosed not only with HPV, but after an abnormal pap and a biopsy — it was confirmed that I was teeming with precancerous or stage one cells on my cervix. This meant I had to undergo painful cryotherapy — all while my original gynecologist lectured me on how I was being punished for pre-marital sex.

When I told this story to my doctor at my last Planned Parenthood visit (before my exam), she burst into tears. She hugged me and apologized that someone in her field made me feel that way. She explained that Pap exams aren’t even done until women are around 21 now — to prevent emotional trauma. 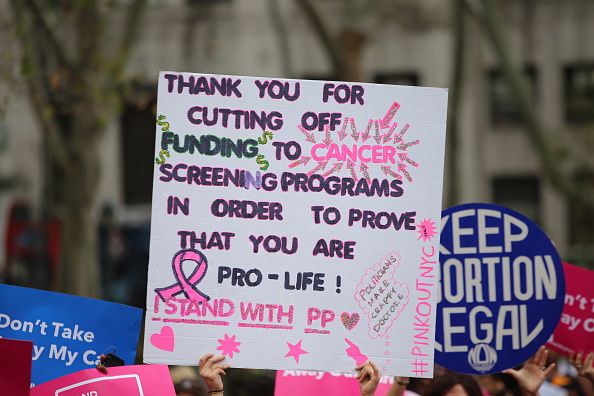 Planned Parenthood is partially responsible for the woman I am today. By being in control of my body and my family plan, I have been able to enjoy life like any other 27 year old should be able to. That is definitely not saying that women my age shouldn’t be mothers; just that all women of any age should be able to choose what they want to do with their bodies and lives. Planned Parenthood backs that belief.

No matter who you are, where you are from, or where you are going, Planned Parenthood is there seven days a week to help you along the way, regardless of what you can afford.