Continuing our ongoing series about female photojournalists, today we’re talking to Kiana Hayeri, a Canadian-Iranian photojournalist based in Kabul, Afghanistan. Born in 1988, Kiana calls herself a “wanderer and visual storyteller.”  She joined us in a conversation about her most well-known body of work (a series entitled “Your Veil is a Battleground”), her start as a photojournalist, and her move from Iran to Afghanistan last year.

HelloGiggles (HG): To start off, I want to talk a little about your project “Your Veil is a Battleground.” Can you talk about where the idea for this project came from, and what it was like to execute?

Kiana Hayeri (KH): Good question! I left Iran [when I was young], and then I went back a couple of years later. I was hanging out, looking at and photographing the generation I was supposed to be a part of. I think what triggered this project was one night I was getting ready to go out with a close friend of mine, I put on my hijab without even looking in the mirror. She was really upset and she asked me, “For god’s sake, can you put on a little make up if you’re coming out with us?” From that point on, I became really keen on how made-up the young women are when they go out, and how they transform the way they look. It is fascinating. So that’s where the idea came from.

It took me a year to find the right subjects for this project. I was going for a certain look, certain type of people who put on a lot of makeup. I photographed them very neutral, hair down, bare shoulders and then photographed them again made-up how they went out. It was very difficult to get people to stand in front of my camera because everyone was paranoid about the photos being published. Also, many many many people didn’t want to appear in front of my camera with no makeup — they just didn’t feel comfortable. It was definitely very challenging. 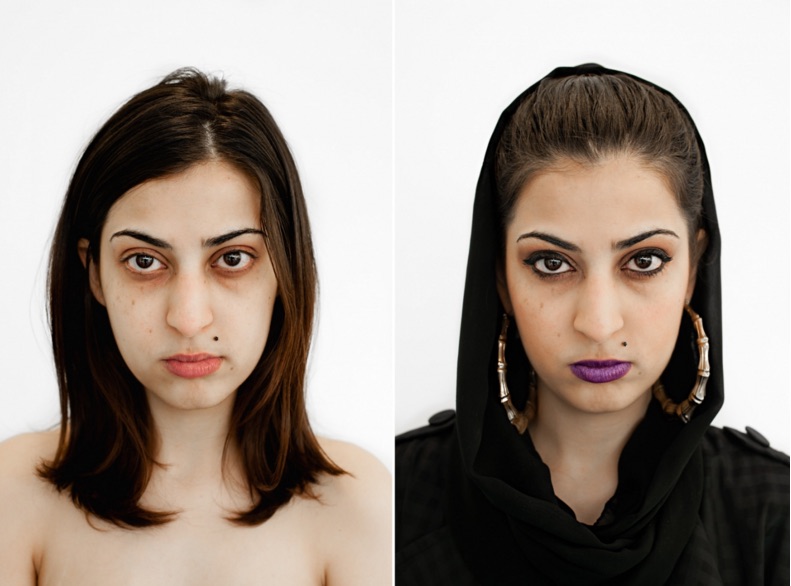 I called it “Your Veil is a Battleground” in reference to Barbara Kruger’s famous work called “ Your Body is a Battleground.” I’m playing with the word “veil,” as in the veil you literally put on your head, and also the figurative veil — the amount of makeup these girls put on, that is a veil.

HG: What brought you back to Iran in the first place? You were born there, right?

KH: Yes, I’m from Iran. When I left as a teenager, I didn’t leave with closure. My departure from Iran was incomplete. I think that’s why I went back. I don’t know if it is the same with other photographers, but anytime I have a problem or something I want to deal with I usually pick up my camera. So that’s why I returned.

HG: How old were you when you went back to Iran to start photographing? Did you consider yourself a photojournalist at that point?

KH: It was 2010, just before I started my last year at university, and I was 22. I wanted to become a photojournalist, and I knew exactly where I was heading, but no. Back then I would not have considered myself a photojournalist. 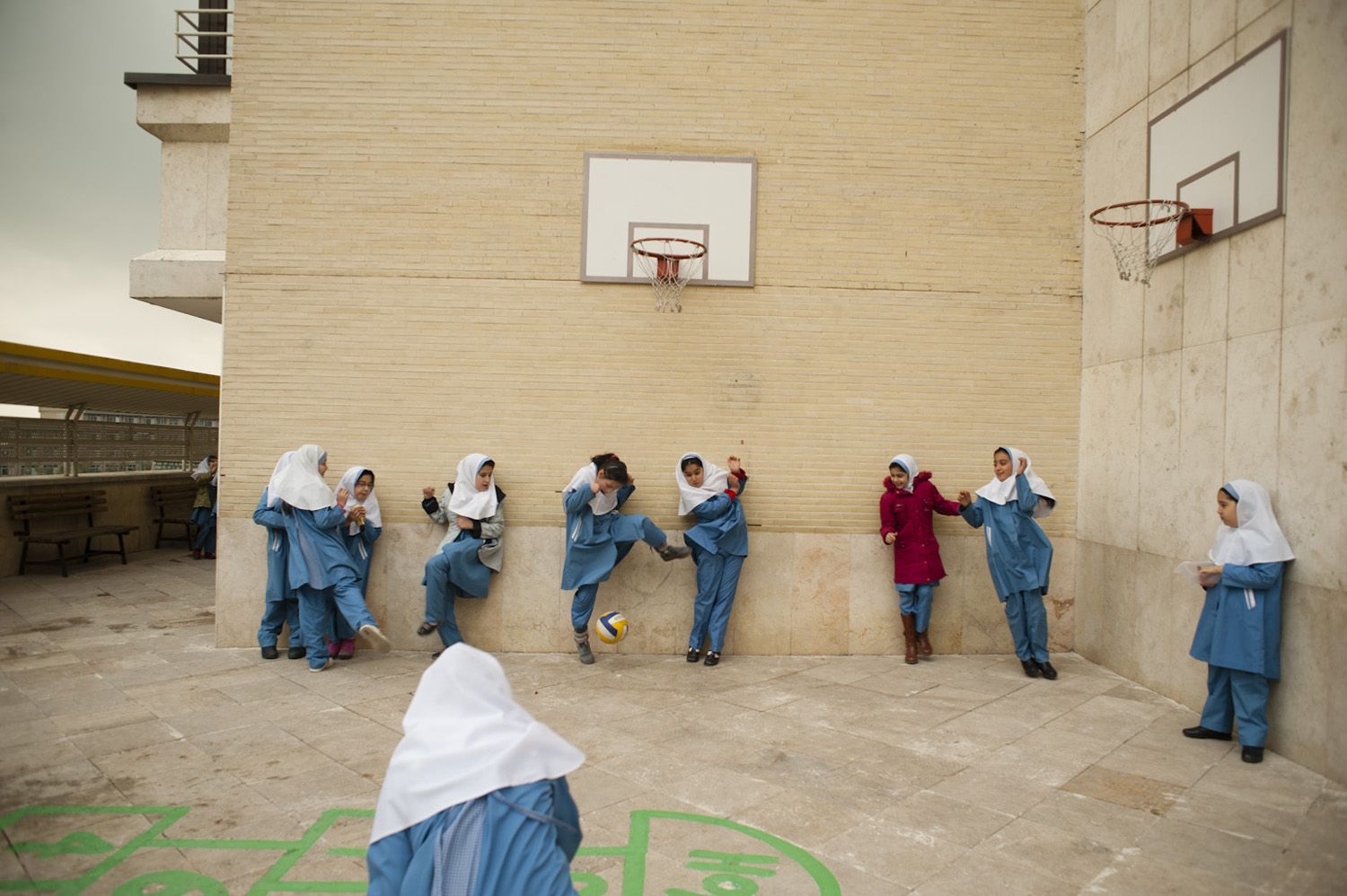 HG: Talk to me about what your path as a photojournalist has been like. When did you realize this was what you wanted to do?

KH: I first picked up a camera in high school because when I moved to Canada, I didn’t speak any English. I knew enough to say, “I don’t speak any English,” but that’s about it. I was taking English classes and ESL classes and all the art classes in my high school, and photography felt right because I didn’t have to speak. Because of that, I was making very expressive photos and doing well in the class, so I was also making friends in the darkroom. Photography connected me to the culture — to the people around me in high school. Then, in 12th grade, my photo teacher showed me the earliest body of work of Dominic Nahr, that was from East Timor. And I found it very fascinating, because at first I was like “East Ty-more, East Tee-more, what is this? Where is this?” I learned about it, and about the conflict going on there, and that is when I decided this was what I wanted to do.

Going into university, my resolve only got stronger. I shaped my own studies to work towards this goal of becoming a photojournalist. I got my first assignment in 2013, believe it or not, that was my first ever assignment for Polka Magazine. Before that it was all personal projects. I was a bartender, a waitress, and I worked in a print lab for three years. I did other things to make money so I could work on the personal projects that felt right, the things that felt close to me. And for me, I think that is how this all worked out. Because I did something that I was interested in, and because I was interested I did a good job. That work paid off, and after that I started getting work I cared about more and more.

HG: So, you’re not in Iran anymore. About this time last year you moved to Kabul, Afghanistan right?

HG: What spurred the move from Iran to Afghanistan, and what has the last year been like for you?

KH: Iran wasn’t working out as a base. I moved to Afghanistan after I had been on short assignment in Kabul, when two friends talked me into moving. I’ll be frank; moving to Kabul, at first, was really scary for me. In order to push myself to do the move, I started telling everyone that I was moving to Kabul, so that a month later when the time came, I felt obligated. And I am so happy that I did, because I’m very happy there. It has been great as a base — there is a lot of work. I’m also learning a lot more, because in Iran I was very isolated from the photo and journalism community for very obvious reasons, but in Afghanistan it’s not like that. I’m learning every day from other journalists who have a lot more experience. I’ve finished one personal body of work and started researching what I want to do next. I definitely think I’m a better photojournalist than I was last year.

HG: What kind of work have you been doing in Afghanistan over the past year?

KH: I do a lot of NGO work, as well as a lot of newspaper and magazine assignments. I get hired a lot because I’m a female, and in Afghanistan it’s difficult to access a lot of stories as a man — so I think naturally, I’ve been doing a lot of women-related stories. Also, I speak Dari and I look Afghan, so I think I’ve been getting assigned a lot of stories that have proven difficult for foreign-looking photojournalists. Topic-wise I do many things, but I don’t do frontline work.

HG: I was going to ask if you’re finding yourself covering conflict, specifically frontline conflict, more now that you’re in Afghanistan.

KH: I do everything about and around conflict, but not frontline. I don’t think frontline work is deep enough to keep me satisfied. The kind of work I do and enjoy doing is when you get to intimately know your subject — when you tell stories that have more depth than what frontline work is. I respect people who do it, it just isn’t something that satisfies me. And that might change over time.

HG: As far as the job in and of itself — being a photojournalist, living in these places — do you have a favorite and least favorite part of the job?

KH: Oh, definitely. My favorite part is that photography grants you access to people’s lives, and I love that. It’s amazing to enter somebody’s life — to share meals, laughter, and even misery. It’s beautiful. I think I do photojournalism mainly because of that. My least favorite is probably more difficult, it’s likely all the logistics. Especially in Afghanistan, things are difficult. The photographing is probably only about 30%, the rest is just figuring out how you’re going to get there, where you’re going to stay, security, and risk assessment . . .  yeah, the logistics are my least favorite. I wish somebody would do those things for me.

*This interview has been edited for length and clarity