Today we’re talking to Daniella Zalcman, an American photojournalist based in London, England. Her work, whether it be on the criminalization of homosexuality in Uganda, WWII re-enactors or her latest project, highlighting the survivors of a forced assimilation program for Canada’s First Nation people, is always artfully executed. Today, she graciously allowed us to pick her brain about her latest project, “Signs of Your Identity.”

Thank you so much for talking to us today. To start off, can you tell us a little bit about the project that the image above is associated with?

DZ: So the project that I most recently worked on focuses on survivors of Canada’s Indian residential school system. These schools existed for about 150 years in Canada, and the last one didn’t close until 1996. These were essentially forced assimilation boarding schools for indigenous Canadians. They were government-funded and church-run and enforced not only total cultural assimilation (in what very recently has finally been termed ‘cultural genocide’ by the Canadian government), but there was also wide-spread documented sexual abuse, physical abuse, forced sterilization, medical experimentation…all sorts of horrible things were perpetrated against these little kids up until the 90’s. The repercussions are still widely felt through the indigenous community in Canada. 150,000 people attended these schools and 80,000 of them are still alive, and not only are the survivors still dealing with the trauma of their own experience but it has unfortunately become an intergenerational issue within the community. So my work has most recently focused on looking at the echoes of trauma, of what that means to pass trauma on from generation to generation.

Wow, such a little known story. What was it that drew you to work on this specific project in the first place?

DZ: So I ended up in Canada in sort of a roundabout way. I work a lot with an organization called the Pulitzer Center on Crisis Reporting…[laughs] which you know… I’m very lucky to have them funding a lot of my long-term social documentary projects. They sent me to Australia in 2014 to speak at this international AIDS conference and while I was there they asked me to come up with another story to work on that was HIV-related. I ended up speaking to a series of indigenous activists and found out that one of the places where HIV rates are climbing the most rapidly is actually in Canada’s indigenous population…and I was really taken aback because you know, even in the hot zones for HIV all over the world, in most places we’re managing to see lower HIV prevalence rates. But in Canada, in one of the richest, most stable countries with one of the best healthcare systems in the world, a country that pioneered harm-reduction strategies like free needle exchanges clinics and safe injection sites, there is this community of First Nations people where in a 5 year period HIV rates went up 25%. That just…completely stunned me. And so I started looking in to why that might be and when I arrived in Canada it became immediately obvious to me that there was a direct correlation between those HIV rates and people who had gone to residential school.

You shot this story in a very specific way. Can you talk a little bit about the photos and why you produced them this way?

DZ: So I work a lot with alternative processes in photography. I think one of the things that a lot of photojournalists struggle with is that the general public is consuming more media than we ever have before and there is a certain amount of fatigue associated with that. We can only look at so many photos of refugees, we can only look at so many photos of war, and then we stop wanting to look at them. And so one of the challenges is “what can I do differently?” Especially for this project where I’m really talking about a story that happened in the past. Keep in mind that I also needed to come up with a way of taking really dark subject matter, I mean this is the darkest, most depressing story I’ve ever worked on, and figure out how to package it in a way that becomes more accessible and more powerful to an audience that maybe is not used to thinking about these issues. That is how I came up with these multiple exposures. Every single portrait is a composite of a residential school survivor combined with something that is somehow significant to the residential school experience—whether it’s the site where a school once stood, whether it is a document from a hearing where someone had to present their testimony, whether it is a place in their current life where they are being marginalized in a different, new way in Canadian society. 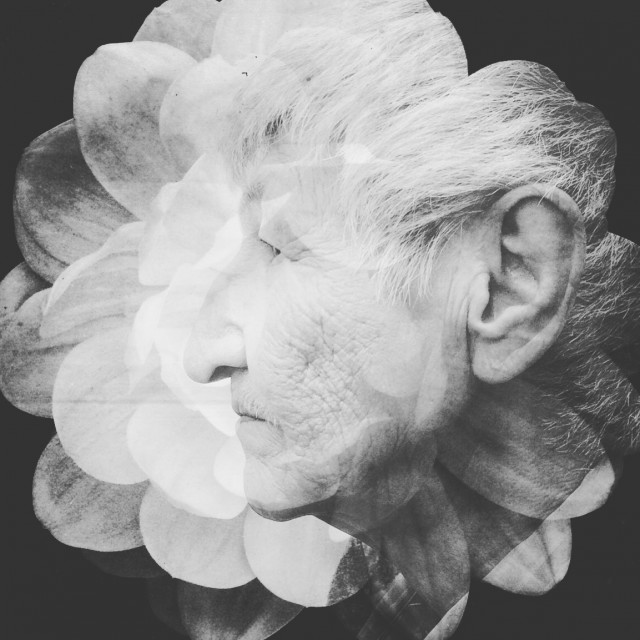 What is the response you’ve gotten from these photos?

DZ: It’s been overwhelming. I’m always very cognizant and very nervous when I go in to a new community and photograph as an outsider, and I think that is something as photojournalists we are always conscious of. To some extent there is a level of implicit awkwardness in me telling this story as someone who is not indigenous. And I expected a certain amount of backlash for that, and there was…there were a couple people who wanted to call me out and I had very good, interesting conversations with them about my role in this story. But for the most part I got so many emails from survivors and children of survivors–so many people could identify especially with not just trauma suffered as a child but with the lingering after-effects.

A lot of your work lately has been pretty conceptual, where do you draw inspiration for the execution of the work?

DZ: The funny thing is that I’m kind of a one trick pony, which I probably shouldn’t say publicly. When I say alternative process I’m really just referring to multiple exposures, and that’s something that is still employed so infrequently in documentary photography that I can kind of get away with it in this little niche I’ve carved out for myself. I think most of my influences are much more straight documentarians, people like Mary Ellen Mark and Eli Reed, but again that’s more photographers who have been traditionally been drawn to injustice and to documenting those stories. I don’t know that I have more conceptual inspirations. I am grateful and lucky to have a lot of editors who are always there to help me throw ideas back and forth and help me figure out exactly what it is I’m trying to accomplish. Those are the people who probably matter the most to my process. 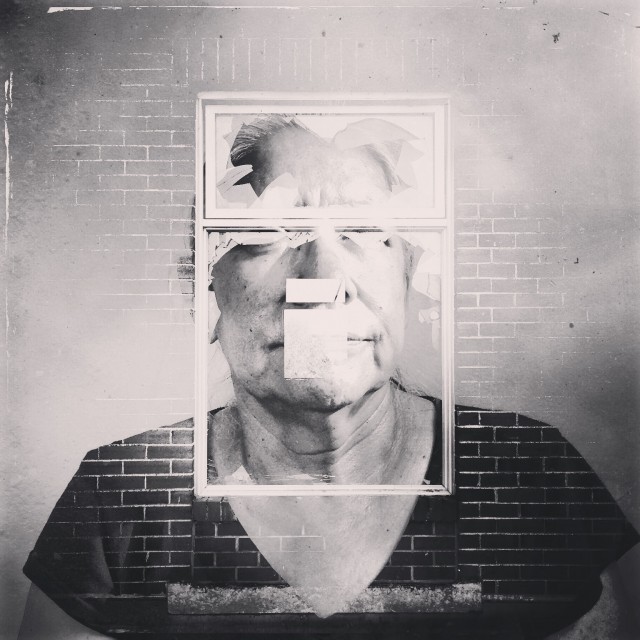 You’re not a one trick pony. Do you have a least favorite/most difficult part of this job?

DZ: Oh definitely. I have a lot of favorite things and a lot of not favorite things. I would say the least favorite is probably…and this is inescapable and I don’t blame anyone I’ve ever photographed for this but…there is such widespread distrust of the media right now. You have to spend more and more time and more and more energy convincing the people you want to photograph that you are genuine and sincere and care about them as people, not just as part of your job. And that’s hard. It can be sort of emotionally draining to be met with such constant suspicion…but at the same time I understand it and I understand it is part of doing what we do.

And your favorite part of the job?

DZ: I think it’s the reward of having actually gained someone’s trust. I end up with these bonds with the people I’ve photographed that are incredibly strong, I maintain friendships with people I photographed years ago, and it’s impossible not to stay deeply invested in their lives and their stories. And Facebook is a minor miracle for me in that regard — I get to keep up with LGBTI activists in Uganda and World War II reenactors in the UK and First Nations people in Canada, and continue to have all these little glimpses into each of their worlds. I’m incredibly grateful for that.

Any advice for budding storytellers?

DZ: Whether you’re a photographer or a writer or any form of storyteller the most important thing to do with a subject is to put down your camera, put down your notepad and just listen. Before you do anything, before you do any work, make sure that people understand that you care about who they are and what their stories are before you care about them as part of your job. That is the best way that you can ensure that someone will let you in to their lives.

What is the strangest/funniest/most interesting thing that has happened to you in the field?

DZ: [Laughing] Well…the first time I went to Canada for this story in Oct/Nov of 2014, I was in Ontario driving north to a small city called North Bay where there is a very large indigenous community and on my way I…hit a moose. With my car. It was about 7pm but almost winter so it was completely dark and they are not any streetlights on those highways once you get out of the main cities. I grew up in Maryland, in deer country so…well, ok so I only got my drivers license as a 25-year-old so I guess I should preface with that. But anyway…we always heard a lot of advice like if you have a deer in your path don’t swerve, don’t brake suddenly because otherwise you can force it through the windshield or if you swerve you can risk hurting yourself far more by hitting an oncoming car. Anyway I’m driving up this highway and all of a sudden I see this giant black thing in the middle of the road. You know, deer reflect light—they have little spots, their eyes reflect light…moose do not. Moose are just giant black holes of nothingness. And so yeah I hit the moose. I was in Canada and I hit a moose and it was a little terrifying and I totaled the car. And this very nice, very Canadian couple thankfully pulled over behind me and helped me sort everything out and wait for the tow truck and they drove me to my destination. The whole evening was very Canadian. So yeah that is my best story.*

DZ: You know that happened a year ago yesterday?

What are you working on now?

DZ: I’m trying early next year to continue this project in the American southwest because…we had these schools too. And we don’t talk about them even though they peaked in the 1970s and 80s. So fingers crossed.