The newest Wizarding World of Harry Potter is set to open up in just over a month, and when it does, you might be hearing a lot of “accio vomit bag.”

While the area isn’t technically open to the public yet, Universal Studios Hollywood has been doing “soft” openings for their newest addition. This means, that a hundred or so lucky no-majs have been able to wander around Hogsmead, and check out the BIG attraction of the area, Harry Potter and the Forbidden Journey. And, unfortunately, they’re exiting Harry Potter and the Forbidden Journey just like Ron after getting hit with “Slugulus Eructo.”

As it is, Harry Potter and the Forbidden Journey is already semi-stomach churning. Now add in some three-dimensional screens, and this is a recipe for an overflowing sick ward. If you’ve never been on the attraction before, this might be a small spoiler if you want to be totally blown away the first time you ride. But, the attraction is a hybrid rollercoaster and motion simulator. You are strapped into a 4-person vehicle, and that 4-person vehicle is on a robotic arm that moves along a track as you follow along behind Harry, flying between giant IMAX screens, and also real Dementors and spiders that will SUDDENLY POP OUT AT YOU. There will be sharp drops and sudden lifts. The robotic arm can also flip you from sitting upright, to completely on your back. At some points you will feel like you’re upside down.

This, alone, is kinda terrifying. This is an actual picture of me riding it in Orlando for the first time, and yes, clearly I am having a blast (I’m on the left). 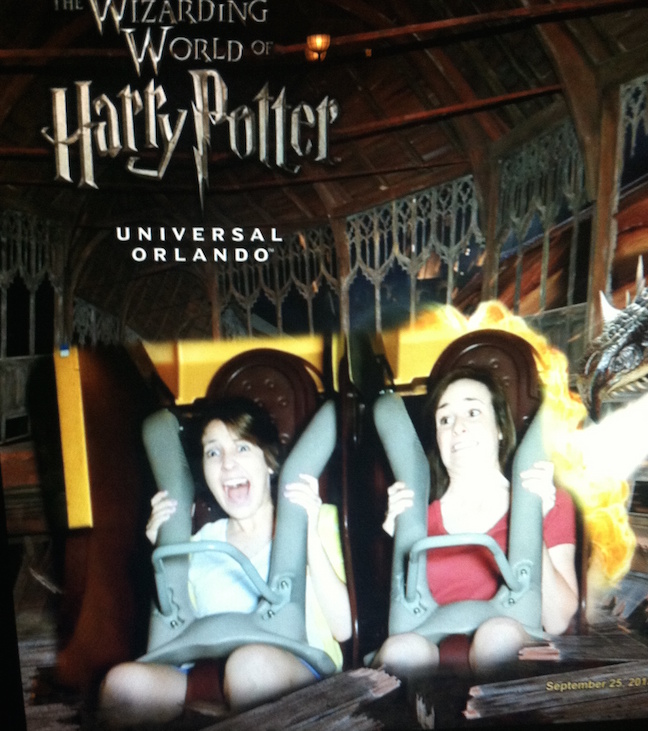 Now hearing that there will be flying, Dementors, and 3D glasses? That’s a whole lot to stomach, pun intended.

According to reports out of Hogwarts, the engineers behind the ride are looking into the fact that it is making so many people sick. The quick fix would, obviously, be to simply remove the 3D aspect of the attraction. But even that won’t be quick, since more than likely the whole ride would need to be reworked and retweaked, sans 3D.

But remember, even without the use of 3D glasses, you’re still going to get the full range of motion, and that could still lead to you hugging a toilet in Hogsmead for a while.

With only 38 days to go before the official opening, it sounds like there’s still a lot of work to be done. Too bad there’s no attraction spell — yet.