No matter how close modern social media has put us to our favorite celebrities through connective sites like Twitter and Instagram, it’s critical to remember that they are people, not products. Paris Jackson, the 17 year-old daughter of late superstar Michael Jackson, just shot out an important reminder of that fact that any fervent fan of any celebrity should take to heart. 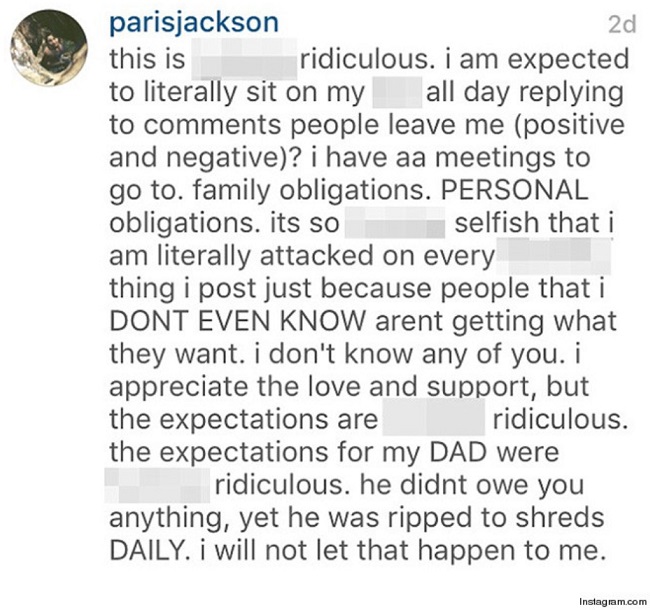 The post, brimming with understandable frustration, came in the midst of an Instagram conversation with fans. While the original comment is buried deep in a 1000 post thread, her justified anger continues to spawn debate from both supporters and detractors.

In the original post, Paris called out fans that mistake her occasional engagement online with having an actual personal relationship, reminding people that they don’t actually know her in real life and that to require some interaction with her is completely selfish. Since the Internet is such a polarized place, it’s likely that fans viewed her non-interaction as a personal slight, and responded with hatred and insults.

Paris even recalls the same stress faced by her father, a global superstar who faced pressure on a constant, daily basis from fans. “The expectations for my DAD were f–king ridiculous,” she proclaims. “He didn’t owe you anything, yet he was ripped to shreds DAILY. I will not let that happen to me.”

We’re glad Paris is standing up for herself. Artists create art for an audience, but also for themselves.  In a culture that seems overwhelmingly focused on getting things when you want them and how you want them, it’s easy to slip into thinking that artists work for you, instead of you consciously choosing to enjoy or not enjoy their work and attention.

Thanks for adding your voice to this important cultural conversation, Paris. We hope you keep speaking up!