No, it’s not just you: Kate Winslet has been talking A LOT about Leonardo DiCaprio on the red carpet lately.

When she’s not addressing the Great Floating Door debate for the umpteenth time, she’s telling everyone that Leo’s even more handsome now than he was in Titanic, or being too excited for Leo to win his Golden Globe to focus on her own win that very same night. And sometimes she just comes right out and says it: Leo’s deserved the Oscar for decades and he really should nab Best Actor this year for his work in The Revenant.

It’s not a coincidence that Kate Winslet’s red carpet talk is all of a sudden all things Leo. DiCaprio’s now up his fifth acting Oscar (he has four nods for “Best Actor” and one for “Best Supporting Actor” under his belt), and if he wins, we will officially get to retire the phrase “Third time’s a charm” and start saying “Fifth time’s a charm” in honor of Leo, which means everyone gets two more tries at a charm, huzzah!

But I digress. Leo’s got awards season momentum like whoa, he’s been winning ALL the major acting awards leading up to the Academy Awards, but just to make sure the Oscars deal is REALLY sealed, his “Oscars Best Friend” Kate Winslet is talking her favorite leading man up to ensure voters super-recognize that this year, that little gold dude belongs to Leo.

Yes, the Oscars Best Friend (or the OBF if you need an acronym) is officially a thing and it’s exactly what it sounds like. Everyone loves Kate, and everyone loves Leo, but everyone ESPECIALLY loves Kate and Leo together. They’re no dummies. They know this. And they’re definitely using our Titanic love to help get Leo to the endzone. 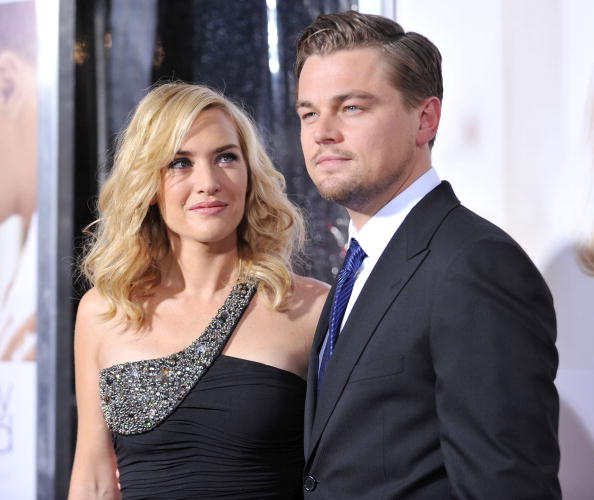 “But wait, that makes me feel weird and manipulated,” you may be saying at this point. Which is fair. But it’s also at this point that you have to acknowledge that the Oscars are not a meritocracy. This isn’t about who actually gave the “best performance,” because real talk, there are probably 800 performances tied for “best” this year if you look at every tiny arthouse movie and straight-to-VOD release. No, the Oscars are about appealing to Oscars voters, helping them see not just why a performance should be awarded, but why the PERFORMER is due a statue. This is politics, and if you want to win, you gotta campaign. So we won’t get mad when nominees come up with (ahem) creative ways to show why they’re deserving of a win. The kids are just doing what they have to do to win big

When Kate stirs up the Titanic nostalgia, she is not only reminding us that we loved Leo 20 years ago, she also reminds us that we’ve been loving him for going on 20 years (25 if you were obsessed with Growing Pains), and that’s a long enough time for an A-list actor to wait for an Oscar.

She’s also reminding us that we’ve been invested in the Kate and Leo onscreen romance and offscreen friendship for two solid decades of our lives. We care about these two, and seeing how much Kate wants a win for her partner in awesomeness makes us doubly want this win for DiCaprio.

Kate isn’t the only Oscars Best Friend in the race this year. The frontrunner in the Best Actress race, Brie Larson, who is nominated for her powerhouse performance in Room, is getting a big push from her own OBF, 9-year-old Jacob Tremblay, who plays her son Jack in the film.

Brie and Jacob are both a bit younger than Kate and Leo (Brie’s 26, Jacob hasn’t started middle school yet) and they’ve been expressing their love for each other the way the young folk do best, through the power of Instagram.

They goofily pose with the best of them:

And no one does candid like Jacob and Brie:

One of our favorite Jacob/Brie shots is when Brie’s Elle cover came out, and Jacob decided he wanted to be a cover model, too:

Brie, in turn, social-media-loves her costar so much she’s devoted a day-of-the-week hashtag to her little buddy, #TremblayTuesday:

Look, if Brie does win that Oscar (and Vegas odds are she’s going to), it’s not going to be because she’s waged arguably the first real and viable Oscars campaign on Instagram. It’s because her turn in Room is a performance people are genuinely excited about and Brie is an actress people have been stoked on for years, where my Short Term 12 and United States of Tara fans at?

That said, Brie’s got some steep awards season competition. She’s up against Oscars heavyweights Jennifer Lawrence and Cate Blanchett, as well Saoirse Ronan, another once-child actress (and a former Oscar nominee to boot) who had a big breakout year with her wonderful starring turn in Brooklyn. This is a competition, and Brie needed a little edge, and that’s exactly what she gets with her OBF Jacob Tremblay.

This is the first year we’ve really noticed the Oscar Best Friend phenomenon, though we’d be surprised if we didn’t see this pattern play out more in the future. Sure, we care about stars, but what we REALLY care about are stars relationships with one another. Of course, we are into Amy Schumer and Jennifer Lawrence as respective celebrities but what we are REALLY obsessed with is their super-powered best friendship. Same with Tina Fey and Amy Poehler. Also same with Taylor Swift and everyone in her  #squad.

And that’s why we are all about the rise of the Oscars Best Friend. You can’t have chemistry with yourself. There is a ceiling for how interesting a person can be alone, and that ceiling is low. In order to be the best version of yourself, the golden-statue version of yourself, you need someone in your corner who sees everything that’s wonderful about you, and makes the world see all those wonderful things, too.

So, yes, at the end of the day the Oscars Best Friend is a campaign strategy. And it’s also something more. It’s a real reminder that if someone loves you enough, they have the power to change your reality, to convince the rest of the world that you’re not just another nominee. No, you are an honest-to-God winner, and you deserve a statue to prove it.