Author Michel Arceneaux shares his thoughts on Congresswoman Maxine Waters, her bravery, and liberals and conservatives’ ideas of so-called “civility.”

“If you continue to make threats toward the president, you’re going to wind up dead, Maxine, ’cause we’ll kill you.” Those were words Anthony Scott Lloyd left on the voicemail of California congresswoman Maxine Waters. The call was made last November — several months before Waters gained national headlines and bipartisan scorn after encouraging her supporters to confront members of Trump’s administration.

As Waters explained in late June in response to the separation of immigrant families at the border, “If you see anybody from that cabinet in a restaurant, in a department store, at a gasoline station, you get out and you create a crowd, and you push back on them, and you tell them they’re not welcome anymore, anywhere.”

House Minority Leader Nancy Pelosi took to Twitter to criticize Waters for her “divisive” comments. Democratic Senate Minority Leader Chuck Schumer joined Pelosi in condemnation, saying, “I strongly disagree with those who advocate harassing folks if they don’t agree with you,” during a floor speech.

“If you disagree with a politician, organize your fellow citizens to action and vote them out of office,” he added. “But no one should call for the harassment of political opponents. That’s not right. That’s not American.”

Speaker Paul Ryan said in a news conference that Waters’s call to action was “dangerous for our society, dangerous for our democracy, and she should apologize and there’s just no place for that in our public discourse.” On July 12th, BuzzFeed News reported a group of Black women sent a letter to Ryan asking that he drop his demand for an apology, calling themselves #IStandWithMaxine.

It is the statement that Chuck and Nancy should have issued immediately in defense of Waters. How pathetic of both to have instead thrown her under the bus. How unfortunate is their cluelessness?

Maxine Waters is a 79-year-old Black woman born in St. Louis, Missouri — a town still ranked as one of the most segregated cities in the United States. Waters is old enough to remember stories of lynchings, police officers siccing vicious dogs on peaceful protesters, Little Black girls being murdered by way of church bombings, and all the other monstrosities committed during the Jim Crow era and the Civil Rights Movement. She is wise enough to reflect on the bigotry of yore and clock its contemporaries who itch to repeat similar evils based on similar ignorance.

Maxine Waters understands America for both its ideals and its longstanding ugly undercurrent.

So when Waters faced a more recent threat against her life — a threat so serious that she had to cancel events — one imagines that she may have been concerned, but not shocked. After all, someone wanted her dead before she even asked for more Trump officials to be publicly chastised and turned away from businesses (as White House Press Secretary Sarah Huckabee Sanders and Homeland Security Secretary Kirstjen Nielsen recently have been). There are always people who want to violently attack their political opponents — particularly if they are both Black and female. 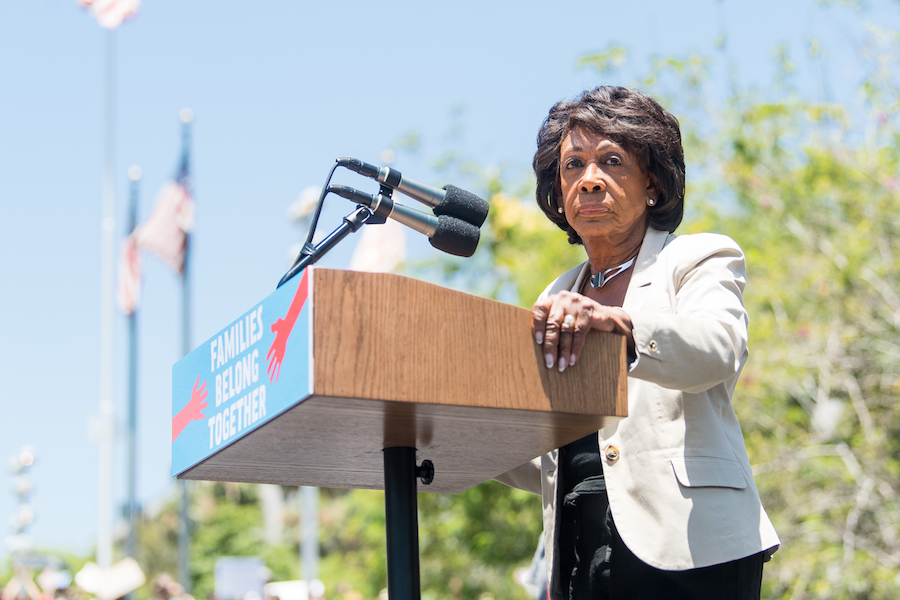 These threats were about putting Maxine Waters back in her place. Such a sentiment was the crux of the Trump campaign. Because Waters is able to see that motive, she has a much clearer view of this country — surely better than Nancy Pelosi and Chuck Schumer. And thankfully, she doesn’t cower to that administration and its supporters the way others do.

During a Families Belong Together rally in Los Angeles, Waters said of the second death threat, “If you shoot me, you better shoot straight. There’s nothing like a wounded animal.” Such defiance is what makes her not only a braver politician than most of her colleagues, but a person deserving of an even greater platform within the Democratic Party.

What Chuck and Nancy and other liberals who piled on Waters fail to grasp is that there is no level of “civility” that will help one reach the uncivilized. I’m not only talking about the deranged men who dole out death threats. The uncivilized also references the supporters of a bigot. No matter how anyone tries to rationalize it, the fact remains: If you lent your support to a demagogue, you are complicit in every horror they unleash on the least among us. You deserve to be called out on it constantly.

Waters — again, a woman who has lived to see racism at its most violent and ugliest, who has had her own life threatened on more than one occasion — did not call on harming any Trump official. All she did was ask that her supporters remind the Trump administration of their inhumanity.

It is not the worst thing in the world. Besides, actions yield consequences.

Dismissing righteous indignation over harmful policies as a mere “political difference” is utterly inane. Being pissed about the government locking up immigrants in detention centers is not the same thing as having a disagreement over the tax code. Being upset about I.C.E. officers snatching babies from the arms of mothers is not on par with beefing over whether or not the private sector should fund a massive overhaul of the country’s infrastructure. These are people’s lives being destroyed over cruel, evil policies by racists.

If memory serves, I recall Chuck and Nancy spent a lot of time pretending they could reach common ground on issues related to immigration with a xenophobic bigot known to screw people over. What did they get in return? No immigration deal and lots of mocking at one of those events Minute Maid Mao calls a campaign rally. Who could have ever predicted that a man who launched a presidential campaign declaring Mexicans to be “rapists” and pledging to ban all Muslims from entering the country would behave in such a way?

We don’t need to be calling for compromise and championing “civility.” It is time to be angry and proactive.

It is time to rally and protest injustice with all available options. It is time to stop trying to play nice with political demons.

If I had to choose between a person to follow in this political climate, it would not be anyone acquiescing to the hatemonger occupying the White House. Chuck and Nancy can keep their calls for civility in the midst of chaos. I’d much rather get mad with Maxine.