A man just streaked across the ice in nothing but a tutu at the Winter Olympics, and Happy Friday

All good things must come to an end, and sadly, the 2018 Winter Olympics will finish up tonight, February 23rd. The games have left us with plenty to remember: We watched figure skater Mirai Nagasu land a triple axel. We witnessed North and South Korea marching together under a unified flag. And this morning, a streaker left us with one more unforgettable sight.

After the men’s 1,000-meter speed skating event, a streaker walked out onto the rink, removing his clothing as he went. At last, clad in only a pink tutu, black sneakers, and a monkey-themed penis pouch, the man slipped and slid across the ice. His chest bore the words “Peace + Love,” and his long, salt-and-pepper hair was tied back into a ponytail.

But despite the commotion he caused, this may not have been the PyeongChang streaker’s Olympic debut. According to Fox News, the man is thought to be the infamous English streaker Mark Roberts, although this has not been confirmed. Roberts has made a prolific streaking career by removing his clothes at more than 500 events, among them Super Bowl XXXVIII in 2004 and the Beijing Olympics in 2008. He even has his own website, thestreaker.org, which chronicles all of his streaks (so far the site hasn’t been updated to include PyeongChang).

The man remained on the ice for several minutes, which was plenty of time for professional photographers to take a few snapshots. 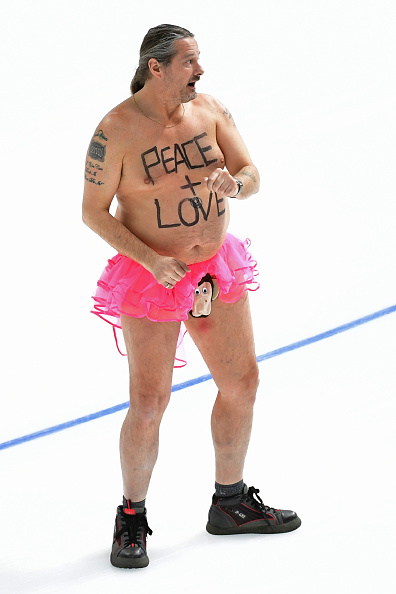 One spectator also managed to capture the streaker in a blurry Instagram video.

Whoever the tutu-wearing man is, we must admit: crashing the Olympics takes guts. And if nothing else, this streaker certainly gave one memorable Olympic performance.