A woman amidst a torrid affair needs to know her lipstick — can’t be leaving any smooch stains on someone else’s honey. Olivia Pope, long embroiled in a twisted romance with the Commander in Chief, has likely earned a doctorate in covert kissing by now.

Pope’s portrayer, on the other hand, Kerry  Washington, has certainly picked up a few tips on subtle makeup from her Scandal character that, oddly, are just about perfect for Valentine’s Day!

Speaking to People, Washington, a spokesperson for Neutrogena, has a strong preference for the line’s MoistureSmooth Color Stick, which makes sense as she says the goal for Valentine’s lips is to always be ready for the possibility of a liplock.

“It’s tricky because I feel like for Valentine’s Day you want to do a bold pink or a red, but you also want to wear something super kissable,” the star said, suggesting MoistureSmooth’s Fresh Orchid as an ideal choice.

Washington also emphasized the importance of suiting the situation on the calendar’s most romantic holiday. “Something warm and natural is always best unless you’re doing like an ‘out out’ date night and you can do red,” she suggests.

True to form, the actress is almost always a fan of sheer, subtle lip color, even on the red carpet. While her fashion choices are varied and typically stunning, there’s a real reserve to her makeup that just works for even dramatic looks. 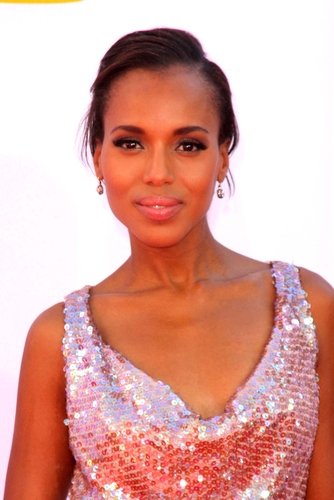 And don’t even think you need a covert lover, or any lover, to put this makeup revelation to work for you. For the actress herself, the day is typically a family occasion, rather than an all day romance-fest. “We have big family plans for Valentine’s Day. Just like family, lots of family, were going to have a fun weekend.” Sounds like a great Valentine’s Day to us!