As a HelloGiggles weekend editor, I work full days on weekends — which meant that yesterday, while I was making sure commas were in the right places and photo credits were correct, I was also watching news break about the effects of Donald Trump’s Muslim ban.

I learned about elderly people and children being detained for hours and hours, even though they were entering the country legally. I read about an Oscar-nominated director, now unable enter the country to attend the ceremony. And I saw tweets about families separated because one person had legally left the country and was now unable to return.

And I saw people fighting back.

I saw photos of the quickly-growing, impromptu protests at JFK airport in New York and other major airports across the country. And I became glued to the ACLU’s Twitter feed, watching updates on their legal challenge to the Muslim ban.

Early in the day, I made a donation to the ACLU. But after my workday ended, I felt like I needed to do something more. Anything. Even doing something very small would be better than doing nothing.

So I headed to the airport.

The journey from my apartment in Brooklyn to JFK airport is a long one — between an hour and an hour and a half — but other people heading to the protest kept joining the subway, more and more of them getting on the closer we got to the airport. When the group of us stepped off the train, the people waiting on the other side of the platform cheered and started a chant:

“No hate, no fear, immigrants are welcome here!

JFK airport is unreachable by subway, so to get there, you need to either take the AirTrain shuttle or drive. And when the group of protesters tried to transfer to the AirTrain, we found police standing in a line blocking the entrance. They would not let anyone through without a plane ticket. 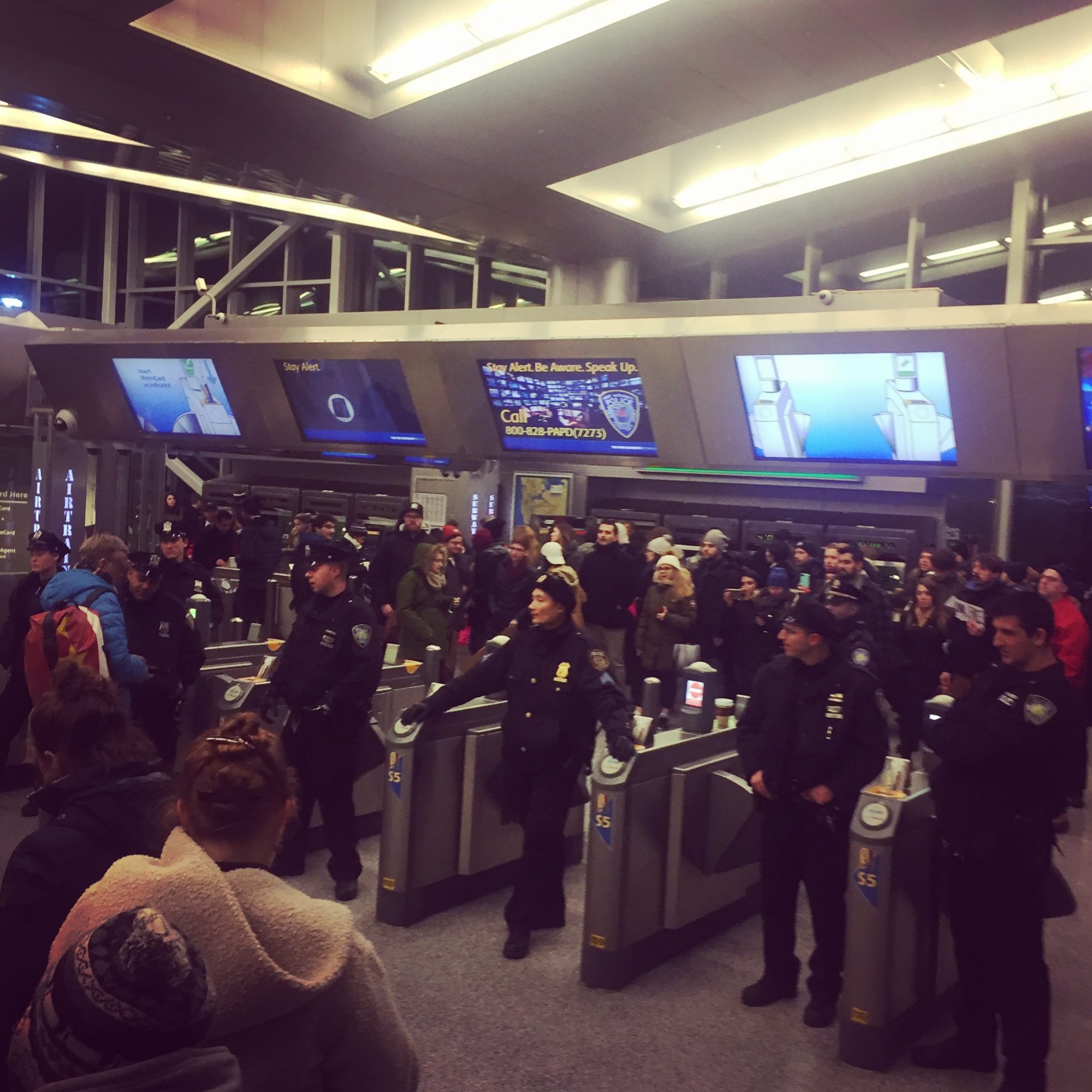 The AirTrain entrance turned into its own mini protest.

“Let us in, let us in! the protesters chanted. "Immigrant rights are under attack, what do we do?" "Stand up, fight back!"

But before too long, someone saw a tweet from the ACLU asking for supporters to head to the courthouse in Cadman Plaza to show support for the emergency stay. So, as a group, we did.

I arrived at Cadman Plaza a little after 8pm, and the crowd was already hundreds of people deep. And every time I looked back, it was growing.

We chanted, “No hate, no fear, immigrants are welcome here.” “Let them in, let them in.” We even sang “This Land Is Your Land.” 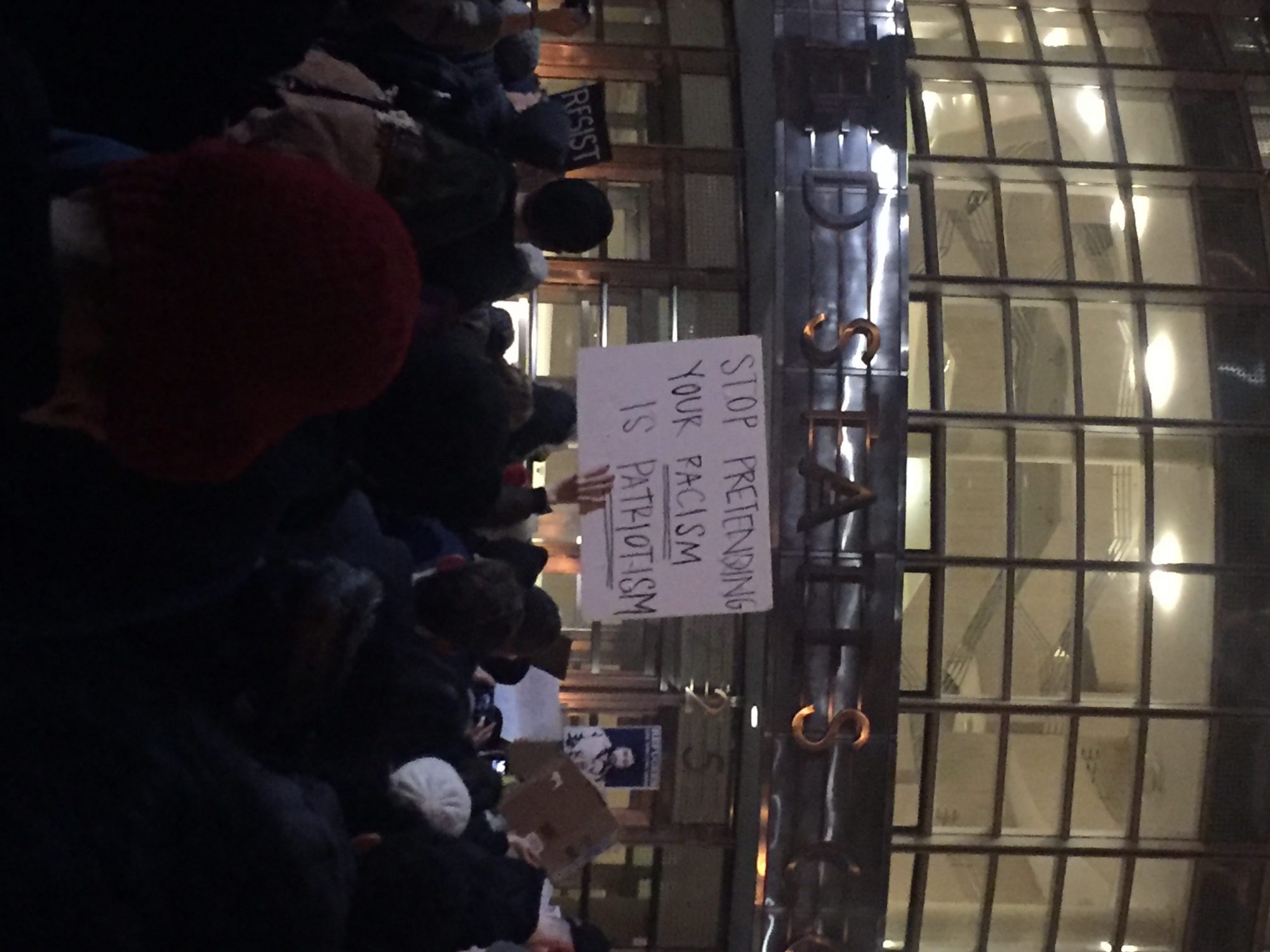 And then, around 9pm, the ACLU won their case.

There was an announcement outside the courthouse, but from where I was, I could only hear cheering. Someone near me checked social media and confirmed it: A stay had been granted.

A band appeared, I don’t know from where, and started playing to accompany the chants. 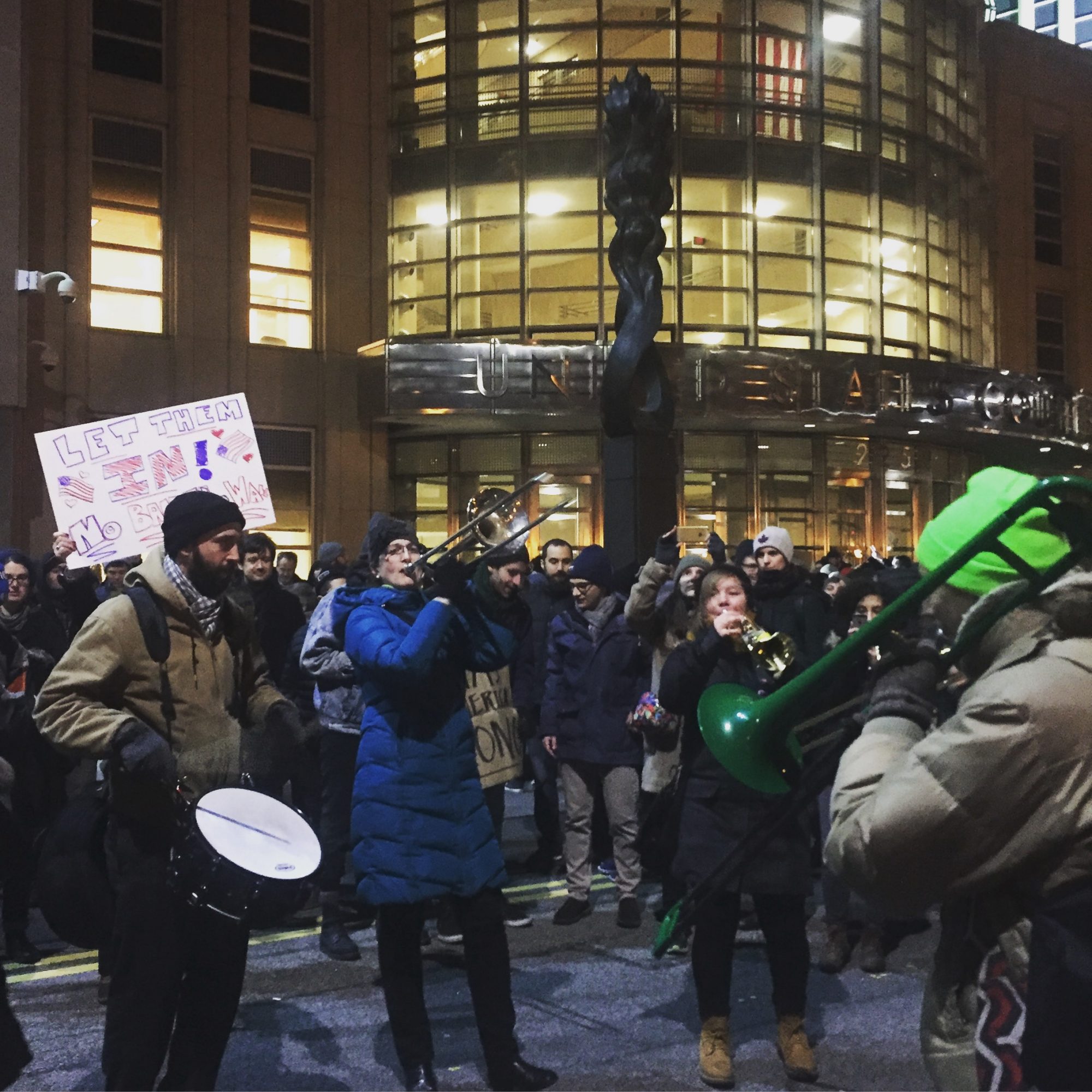 "No hate, no fear, immigrants are welcome here!"

As some people headed home, more people arrived with colorful signs to show support and celebrate. One man wearing a pussy hat held a sign that said, “Banning immigrants in Brooklyn? Fughetaboutit!” 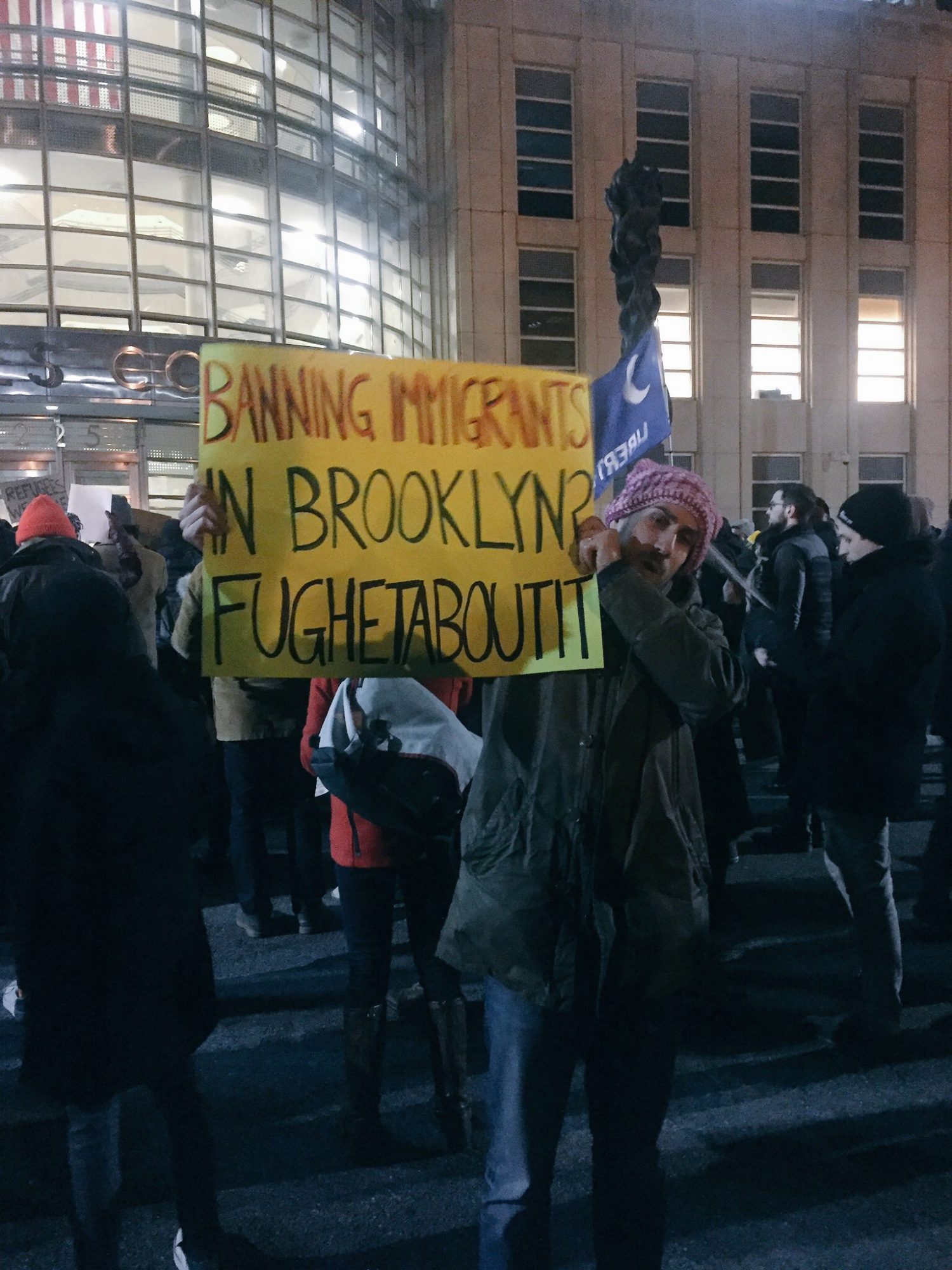 I even saw a dog wearing a sign that said, “I wag 4 refugees.” 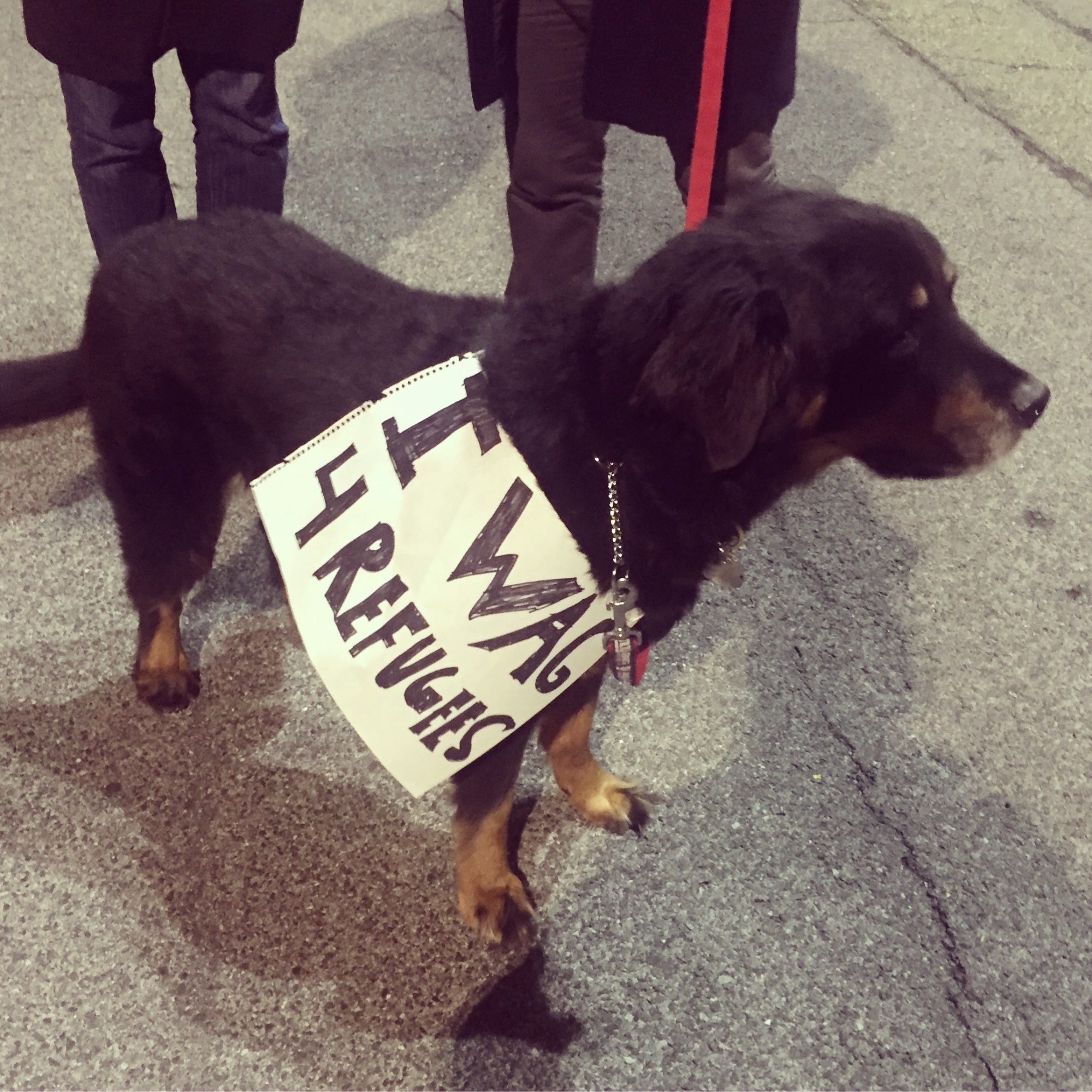 I am not an immigrant or a child of immigrants, but I have friends and family who are. But more than that, I believe that our country should be open to everyone, regardless of religion, race, or country of origin.

A temporary stay was granted last night, but there is a long fight ahead of us. And I urge you to do whatever you can to help.

That may mean showing up to a protest yourself — there are more happening around the country today. Or it might mean making a donation, even a small one, to an organization like the ACLU or the National Immigrant Law Center. Maybe it means calling your representatives and asking them to fight for Muslim rights and immigrant rights. But you CAN do something.

And last night proves that protests can make a difference.