The 2018 Winter Olympics are in full swing, and regardless who brings home the most medals, there’s already an important (but woefully overdue) milestone to recognize. There are 14 publicly “out” LGBTQ athletes competing in this year’s Olympic Games — a significant increase from the 2014 Winter Olympics, where only seven out athletes competed. All were women, and none were American. This year, three openly LGBTQ American athletes are competing: speed skater Brittany Bowe, skier Gus Kenworthy, and figure skater Adam Rippon. Additionally, a total of four men are on the list.

In order to put this year’s LGBTQ representation into context, we must examine the history of what the community has faced throughout the history of the Olympics.

Historically, athletes kept their sexuality hidden due to very real fears that ranged from losing their well deserved spots on the Olympic team to imprisonment. In 1908, Danish gymnast Niels Bukh was removed from his team for being “too butch.” Then there’s the harrowing tale of track star Otto Peltzer, who competed for Germany in the 1928 and 1932 Olympics. Two years later, Peltzer was outed, arrested for homosexuality, and imprisoned in a Nazi concentration camp.

Then, in 1950, Nazi party member Karl Ritter von Halt was named president of the German Olympic Committee, sending the clear message that the Olympic committee had no interest in supporting — let alone protecting — LGBTQ athletes. 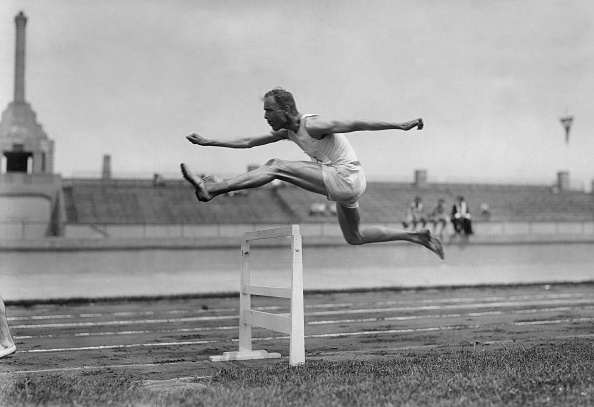 It wasn’t until 1988 that an openly LGBTQ athlete competed in the Olympics: Robert Dover. The U.S. equestrian, who has competed in six Olympic games, told ESPN in 2004 that some athletes don’t want chatter about their sexuality to distract from their performances — but that’s hardly the only motivation for every closeted Olympian.

"[T]here also are many athletes afraid to come out because of their peers, or their coaches or their loved ones having negative feelings,'' Dover told the outlet. "We have to keep on showing the world that — just like straight people — we're going about our lives, doing the very best we can to make our country and our families proud.''

Canadian swimmer Mark Tewksbury, who won a gold medal in 1992 and came out in 1998, told ESPN that he remained closeted throughout his Olympic career due to valid fears. His teammates regularly used the word “fag” as an insult, and Tewksbury recalled being “afraid of being beaten up, afraid my coach would stop coaching me, afraid my teammates would reject me.” In short, coming out could have jeopardized his future in the sport.

Upon coming out two decades ago, Tewksbury swiftly lost a six-figure deal as a motivational speaker because he was deemed “too openly gay.” Similarly, American tennis player Martina Navratilova stated that she lost $10 million in endorsements after coming out as gay in 1981.

In a sign of progress, marketers and sponsors flocked to skier Gus Kenworthy leading up to the 2018 Olympics. Furthermore, both he and Rippon have used their platform to take a stand against the notoriously anti-LGBTQ Trump administration. Kenworthy stated that he’ll turn down an invite to the White House if and when it’s extended. “I have no interest in faking support. I don’t want to go shake his hand,” he said, adding that Trump’s attempts to ban transgender individuals from serving in the military are “a direct attack on the LGBT community.” Rippon turned down a meeting with Mike Pence, citing the Vice President’s horrific track record of pushing anti-LGBTQ legislation.

But there is still a great deal of progress to be made. There are no openly transgender athletes competing in PyeongChang. And there are 2,952 athletes in this year’s Olympics, meaning that just 0.5% of the competitors are openly LGBTQ. Although there are no comprehensive statistics on what percentage of the world’s population identifies as LGBTQ, surveys conducted in the United States and Europe indicate that the number is somewhere in the range of 6% to 10%. It’s reasonable to assume that a significant number of 2018 Olympians remain closeted due to fears of being shunned by their teammates and fans, losing endorsements, and simply not feeling safe due to the risk of hate crimes.

And, of course, discrimination is still alive and well. John Moody, the executive vice president of Fox News, stated that “unless it’s changed overnight, the motto of the Olympics, since 1894, has been ‘Faster, Higher, Stronger.’ It appears the U.S. Olympic Committee would like to change that to ‘Darker, Gayer, Different.’” He also added that the diversity will hinder America’s ability to bring home medals. (I can only hope Moody caught Rippon’s incredible debut during this weekend’s team figure skating competition.)

To be clear, no LGBTQ Olympians should feel pressured to come out because they “owe” it to us. The real problem is that many have remained closeted because they’re keenly aware that coming out could negatively impact or destroy their careers.

We can simultaneously celebrate this year’s milestone and acknowledge that there is still a great deal of progress to be made before all members of the LGBTQ community can safely come out without fear of jeopardizing their careers, Olympic or otherwise.