During the debates, Kamala Harris and Kirsten Gillibrand showed what solidarity between women looks like

The July Democratic debates left much to be desired. For example, despite two nights that lasted nearly three hours each, there wasn’t a single question about reproductive rights—even though they are currently under vicious attack. Unsurprisingly then, the moderators also ignored issues faced by women, gender non-conforming folks, and the LGBTQ+ community. With 10 candidates on each stage and stringent time limits, the format was chaotic and made it nearly impossible for contenders to delve into details of their policy proposals and plans to implement them.

But there was a bright spot on Wednesday: Senators Kirsten Gillibrand and Kamala Harris showed us exactly why it’s so important for multiple women to have a seat at the table (or, in this case, on the debate stage). In 2016, Hillary Clinton made history as the first female nominee of a major political party; during the primary, raising the issue of women’s rights rested solely on her shoulders. Clinton leaned in and was famously accused of playing the “woman card” for committing the cardinal sin of discussing issues like reproductive rights, paid family leave, and affordable childcare.

The presence of not one but three women on the debate stage changed the game, and Gillibrand and Harris seized the opportunity. One of the most memorable moments of the night came when Gillibrand questioned former vice president Biden about an op-ed he penned in 1981 that seemed to imply women with careers were contributing to “the deterioration of the family.”

Biden fired back by completely changing the subject, discussing his work on the Violence Against Women Act and Lilly Ledbetter Fair Pay Act. Then, he took a cheap shot at Gillibrand: “I came up with the ‘It’s on Us’ proposal to see to it that women were treated more decently on college campuses. You came to Syracuse University with me and said it was wonderful,” he said. “I’m passionate about the concern making sure women are treated equally. I don’t know what’s happened, except that you’re now running for president.”

It should come as a surprise to no one that Biden and Gillibrand share many of the same policies and ideals, and have successfully worked together in the past. The same could be said for everyone else on the stage because, well, they’re members of the same party. Biden’s implication that, by asking a fair question about his past statements, Gillibrand has turned on him is absolutely absurd. Due to the aforementioned time constraints, Gillibrand didn’t get a chance to respond to Biden’s implication that she’s disloyal and apparently owes him something because of their collaborative work on issues of campus sexual assault.

Harris interjected and was permitted to speak, and she used her time to address Biden’s problematic record on reproductive rights: “Listen, I mean, talk about now running for president and changing your position: on the Hyde Amendment, Mr. Vice President, where you made a decision for years to withhold resources to poor women to have access to reproductive healthcare, including women who were the victims of rape and incest. Do you now say that you have evolved and you regret that?” she asked Biden. “Because you have only, since you’ve been running for president this time, said that you had—you in some way would take that back or you didn’t agree with the decision that you made over many, many years.”

“This moment perfectly exemplified why the presence of multiple women is so important—they know the stakes and can join forces to make sure men aren’t let off the hook simply because a candidate’s time has run out.”

If Gillibrand had been the only woman on stage, I’d venture a guess that the next candidate to speak wouldn’t have taken Biden to task on an issue that directly pertains to women’s rights. This moment perfectly exemplified why the presence of multiple women is so important—they know the stakes and can join forces to make sure men aren’t let off the hook simply because a candidate’s time has run out. Harris’s pivot also showed that she had Gillibrand’s back, even though they’re competitors—she heard an unfair, insulting statement, and she didn’t let it slide.

“What you saw [on Wednesday] was two women who understand that what’s good for women and families is good for America—and moreover, that we won’t allow the men to decide when we’re done discussing the issues women care about,” Maria Hurtado, spokeswoman for the Gillibrand campaign, told HelloGiggles in an exclusive statement.

It wasn’t the night’s first moment of solidarity between Gillibrand and Harris. Earlier in the debate, Dana Bash asked Gillibrand a question about healthcare and included a statement that was clearly meant to create a clash between the two senators: “You support Medicare for All. How do you feel about Senator Harris continuing to call her health proposal Medicare for All, when it includes a far more significant role for private insurance than the bill you co-sponsored?”

Instead of taking the bait, Gillibrand chose not to criticize Harris’s proposal and instead gave a response that focused entirely on her own policy and platform. 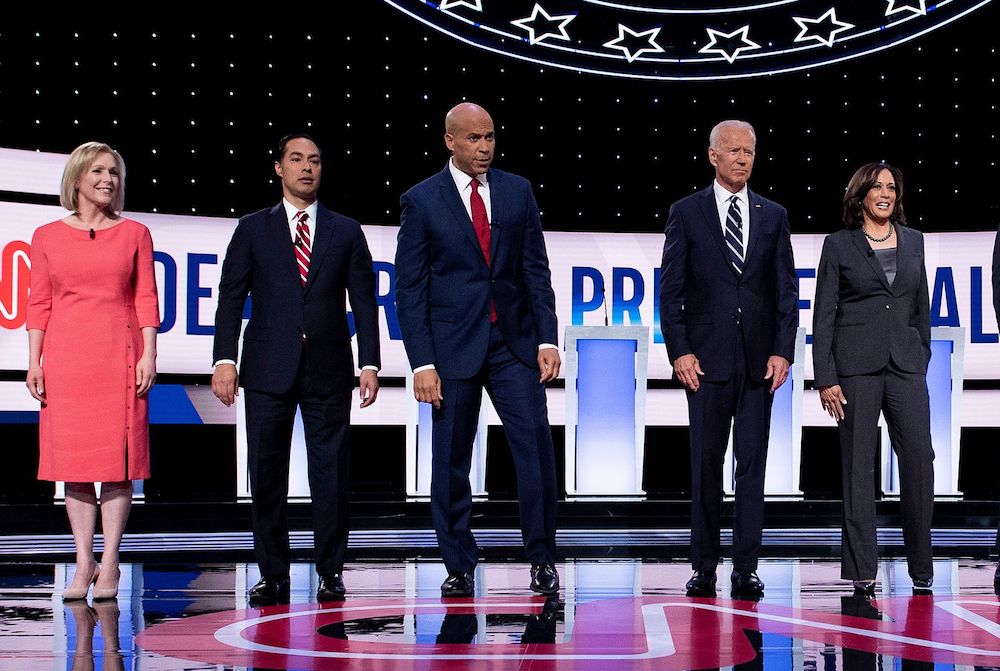 To be clear, none of this means that women candidates shouldn’t challenge or criticize one another when it’s appropriate—and as the field narrows, it’s safe to assume this will happen. Every single candidate in the race has at least one problematic stance or action to answer for, and it’s fair game. But one thing I don’t expect to see is women candidates allowing statements like Biden’s to be quickly dismissed (and most likely forgotten by viewers) as moderators move on to the next question.

For the first time in history, there’s more than one woman on the debate stage to take on this task. And if Gillibrand and Harris’s performances on Wednesday were any indication of what’s to come, we can count on the women in the race to team up when the men (and moderators) brush off important issues that affect women all over the country. This job should never have fallen on one candidate’s shoulders and, at long last, we’ve reached a point where it hasn’t.