Sicario: Day of the Soldado‘s Isabela Moner needed a dog on set to get through filming, and we totally get it

For seasoned acting vets like Benicio Del Toro and Josh Brolin, filming a dark movie like Sicario: Day of the Soldado, while not necessarily easy, is certainly nothing new. These guys have been killing it in Hollywood for decades, so an action-heavy emotional thriller like the Sicario sequel was just another day at the office for them. But for young actress Isabela Moner, spending months mired in the intense drama surrounding the drug war at the U.S.-Mexico border, terrorism, and human trafficking, this job was unlike any other she’d ever experienced before. And she came out the other side of it a completely different person.

Playing Isabel Reyes, the daughter of a cartel leader who suddenly gets kidnapped and realizes just how sheltered her life has been up to that point, the now-16-year-old actress filmed Sicario: Day of the Soldado when she just 15. That meant she turned to her experienced co-stars as well as director Stefano Sollima for advice and support every step along the way. But her main source of comfort on set actually came from an unlikely — but completely relatable — source: an adorable puppy named Elodie.

When HelloGiggles spoke with Moner about Sicario: Day of the Soldado, she was excited to get to finally shine the spotlight on Elodie, her rock through filming. We also spoke about the film (of course), but honestly, you don’t pass up any chance you get to talk about dogs. 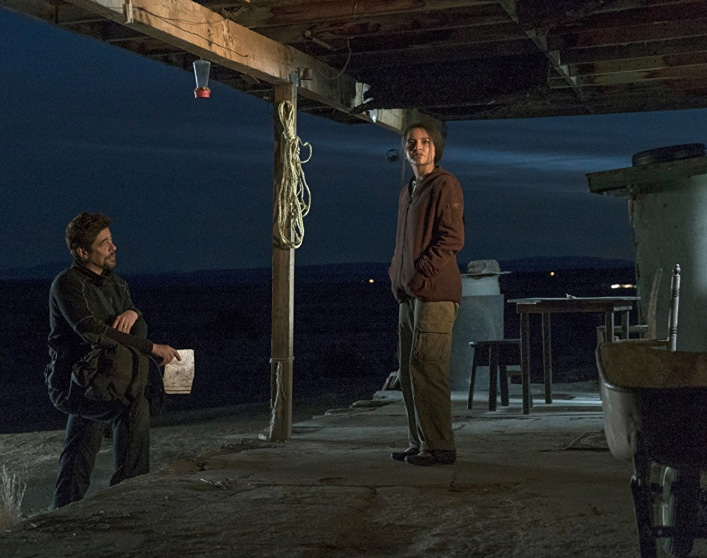 HelloGiggles: Sicario: Day of the Soldado was such an intense thrill ride from start to end. Because the movie is so dark, even up to the very final scene, how did you keep things light while filming?

Isabela Moner: It helps a lot to have the other actors there who are complete goofballs. It’s quite interesting because when you are on an intense film like that, you have to have fun and be happy in between takes. And also my tutor who is my guardian on set, she brought her dog, her little pitbull, and she’s so cute. Her name is Elodie and she kept everyone happy on set. She was a little ball of light.

HelloGiggles: That sounds amazing. Dogs do make everything better.

IM: Exactly! Seriously it was like having a therapy dog on set having her around.

HelloGiggles: Maybe every intense film set should have a dog around. I can see this idea catching on.

IM: I agree. And usually crew members do bring their dogs but this time there weren’t many. I don’t know why. Maybe because we were on location they couldn’t bring their dogs. But Elodie, I attribute my success to her.

HelloGiggles: How weird was it playing a character with the same name as you for not only the first but the second time in your career after you played Izabella in Transformers: The Last Knight? Are you getting used to playing characters only named Isabel/Izabella now?

IM:  [Laughs] What a weird coincidence. Even in my next [project], I did Instant Family, this comedy, and my character’s name was Lizzie. So it’s similar and I don’t know if this is like a pattern that means I’m supposed to get these roles, I don’t know. [Laughs] It’s fate or coincidence.

HelloGiggles: Going into the film, I was expecting all of the heavy lifting to be done by Benicio and Josh, but it was pleasantly surprising at how much you carried the emotional weight of the story with Isabel’s kidnapping. How did you prepare to take on this role knowing that most of the emotional gravitas was coming from you?

IM: I had never done anything really like it. But I guess I knew I had to be capable of doing so. When I signed up for it, the director told me, “You have to be willing to cut your hair off completely,” and I told him, “Of course.”

HelloGiggles: You actually cut your hair off? I thought that was a wig!

IM: Yeah. I was ready to do anything to be a part of this project. I read a lot of books on the trafficking of young girls in Mexico, and they were all fiction, but they were based off of real stories. One of the authors actually gathered a bunch of intel from all of these different girls who had been trafficking victims, and I did a lot of research to really educate myself on the topic. I was also really open to advice. I knew that I wasn’t just going to immediately do it right, I had to work hard. Whether it was Benicio taking some extra time to talk with me about the scene or if it was Stefano giving me a pep talk because I told him, “I don’t know if I could do this,” there was a lot of that, just being honest with myself throughout the whole process because at the time I was only 15. You can’t just expect to be fully capable right away but hard work does pay off.

HelloGiggles: Did Benicio or Josh give you any advice or tips during filming on how to handle such a dark and intense film?

IM:  They did and it was great. Most of our conversations were light and happy and full of funny jokes. But when it did come down to it, they were very supportive of me. Benicio was really proud of me and told me that I had a lot of heart. He was very, very, very kind and he didn’t have to be. I didn’t expect him to be at all so it was really great that I had that kind of support system not only with Elodie the dog but with also my co-stars.

HelloGiggles: It’s fascinating to think that only a few years ago, in a movie like this starring two veteran actors like Benicio and Josh, the young female role would just be an accessory. But now Isabel is a fully fleshed out, three-dimensional role with emotional weight and complexity. What does that mean to you, getting to play this kind of role knowing that it’s still so rare for female characters to be written like this?

IM: I’m not going to deny that in Transformers, Izabella was a great role but she didn’t have a very important part in the storyline. She didn’t have as prominent of a role. In this case, the other Isabel [laughs] in Sicario, that was what attracted me to the role, the evolution that Isabel goes through. Normally where younger girls my age can’t relate to a story such as this without a young female in it, that acts as a kind of surrogate in this film and people can go, “Oh shoot, I can see my daughter in this situation,” or, “I can see myself in this situation.” She’s living this normal, privileged life that a lot of people who might see this movie can relate to because suddenly her eyes are opened to this crazy world of poverty that she was not aware of in Mexico to begin with. She was sheltered from it her whole life. In a way, this all represents that welfare side of America and the people who kind of almost refuse to open their eyes to it. It’s quite emotional when she does and when she realizes that her father killed so many people’s families, it’s so depressing.

HelloGiggles: How is Isabel changed by her journey throughout the film?

IM: Isabel does come out of this with a little bit of PTSD, that’s what Stefano and I were discussing. She goes through all of this in the span of a few days and it’s quite heartbreaking but it’s true. It’s true to what would actually happen if someone was thrown into this type of situation. It’s like as if a bunny is thrown into a sea of sharks, you know?

HelloGiggles: Isabel ends up bonding with Alejandro throughout the film in such a deep way – what was that like building that tense and complex dynamic with Benicio?

IM: In between scenes we really got to know each other, we spent a lot of time together. He told me about his home town in Puerto Rico. He learned about my life. It was almost as if we started to warm to each other just as Isabel and Alejandro did. And we almost filmed the movie chronologically too, to be honest with you. It was basically filmed in order and that helped. It was such a great opportunity to be able to work with him. He really did have a lot of great tips to tell me and wisdom to share.

HelloGiggles: What was the biggest challenge for you in taking on this role?

IM: It had to have been the haircut. I know that at first that sounds kind of dramatic but when you are 15 and your hair is a part of you, it’s your womanhood. You do your hair in the morning, you use it to cover your face when you start to cry or when it’s cold outside. When they cut my hair it was almost like losing a part of me. I started growing my hair out when I was 12, so it was tough. But it did help to donate it. That helped a lot and made me feel a lot better about it, like it wasn’t for nothing. I didn’t see at first why I couldn’t just wear a short wig but then I understood later, it was very symbolic and helped me understand Isabel’s journey even more. I don’t regret it one bit. Even though I might have at first.

HelloGiggles: Where did you donate your hair?

IM: Wigs for Kids. I actually went and ended up visiting the headquarters for that foundation and it was very inspiring. I saw all these handwritten cards that were sent to Wigs for Kids from the patients themselves and they all feel so beautiful so to know that I helped make someone’s day like that was the cherry on top.