It feels like this case should have already been resolved, but for some reason it’s made its way to the top of the legal system. Both sides have some pretty compelling arguments, and the Supreme Court’s “gay wedding cake” case ruling will likely end up defining something other than discrimination. That’s what the case is really about on a human level, but when it comes to legal arguments, this baker might actually has a viable case.

The couple in question, Charlie Craig and David Mullins, who are being represented by the Colorado Civil Rights Commission, walked into Mainstream Cakeshop, owned by Jack Phillips in 2012 with their mother. They asked the guy to make them a cake for a wedding, and when Philips realized that they were talking about their wedding, he told them he just couldn’t do it.

Deborah Munn, Craig’s mother, told NPR of the silence in the car when they left the shop. “I could see my son’s shoulders were starting to shake; he had broke down and he was crying. I could not believe that a business owner, someone who makes pastries, could simply turn someone away because of who they are,” she said.

Here’s the couple with Munn on Tuesday. 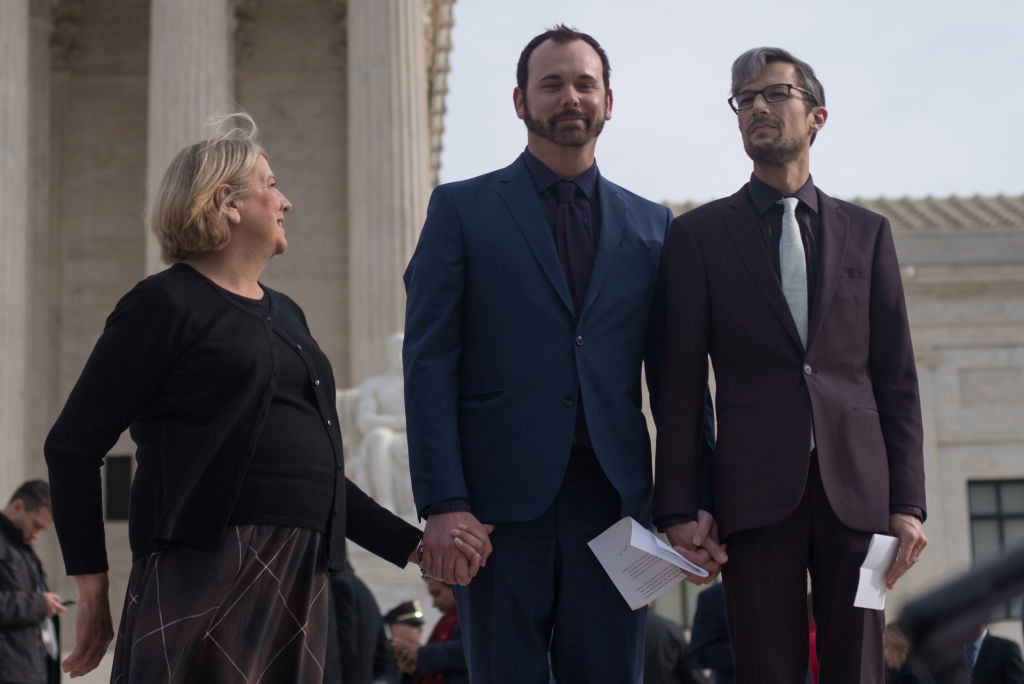 On its face and to those unversed in legalese, the case seems like an obvious case of discrimination. The Colorado state Supreme Court thought so, too, when it ruled that the baker violated the state’s discrimination laws. Philips appealed to the federal Supreme Court to fight the ruling. In a terrifying move (at least, if you care about discrimination protections), the Trump administration’s Justice Department filed a brief on Philips’ behalf in September, saying that being forced to bake a cake violated his First Amendment rights.

This case is about whether or not making a cake is a form of protected speech and if it’s discrimination if a person chooses not to.

There are all sorts of issues that can stem from this line of questioning, and the justices were split when they started to hear arguments on Tuesday. Justice Ginsberg and Elena Kagan jumped on Phillips’ lawyers to explain how making a cake is a form of protected speech. Things got a little dicey as they tried to focus on the customization of the cake, since that’s the key to Phillips’ argument.

So, it was the fact that the couple had asked Phillips to “express himself” through cake decoration that was the violation of his rights. If the couple came in and bought a cake from the fridge that was already made, it might have been different (or Phillips never would have made it all the way to the Supreme Court in the first place). The First Amendment does protect non-verbal speech, so a cake might actually count. But does freedom expression also mean a freedom to discriminate in a public place that’s open to the public? Phillips’ supporters think so. 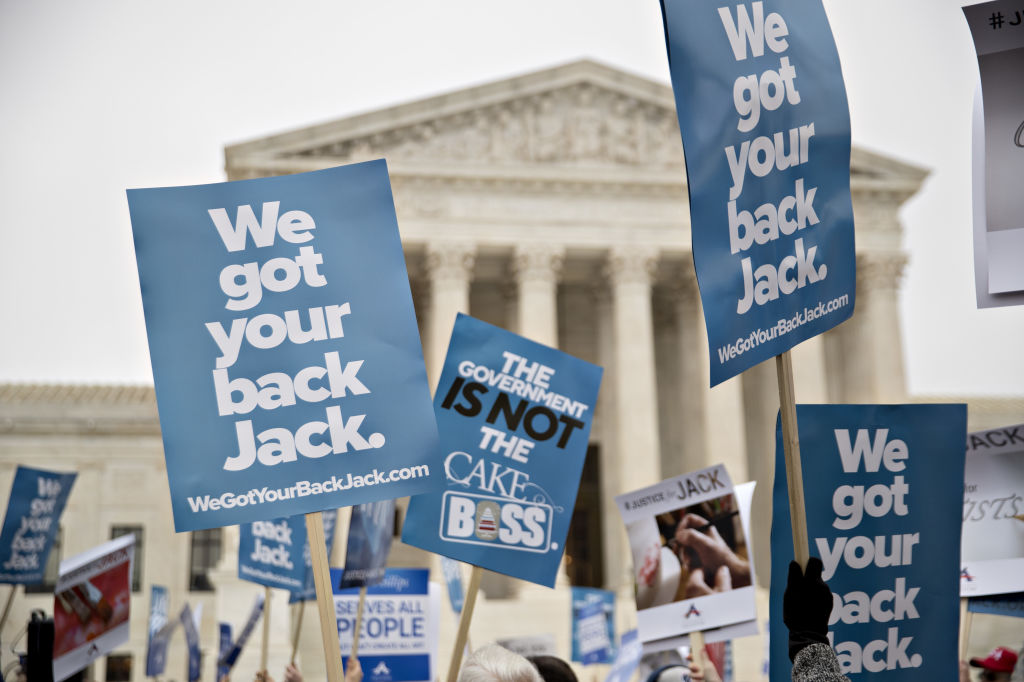 That’s what they’re fighting about. Ginsburg asked, “The person who does floral arranging. Would that person also be speaking at the wedding?” Kagan joined in, asking about the hairstylists or the chef. Phillips’ legal team thought that some people would and some wouldn’t be protected under the First Amendment. Kagan said, “Whoa! The baker is engaged in speech, but the chef is not engaged in speech?”

Yes, these are the conversations going on in the highest court in the land.

But it’s nothing to smirk about. This is serious stuff. You don’t get to just *have* debates in the Supreme Court unless a few justices think that both sides have compelling arguments. There are a lot of people on social media using the #JusticeForJack hashtag. Many people support this guy in the name of any business being able to choose who they serve and why.

Some justices were worried that a ruling in favor of the baker would mean that artisans, businesses, and artists could essentially discriminate at will, which is  illegal. It would be akin to allowing businesses to put up “WHITES ONLY” signs during the Jim Crow era or discriminate against any number of communities. The Trump administration and Phillips’ supporters are seemingly pretty cool with that.

If Phillips opposes gay marriage and won’t serve same-sex couples because of his religion, what about allowing women who use birth control or divorced people buy his cakes? This ruling is about protecting the rights of all people, and it’s a little scary that the Trump administration somehow thinks Masterpiece Cakeshop is on the right side.

Floyd Abrams, a very prominent First Amendment lawyer, signed a brief that called the cake shop’s argument for what it was: a ploy to pretend like discriminating against LGBTQ people was somehow impeding his right to practice his religion. Abrams wrote, “Artists who sell their creations to the public are, like other commercial actors, bound by a variety of generally applicable laws, including laws that forbid businesses to refuse service on certain grounds.”

Put it this way: A same-sex couple shouldn’t just have to “go to another cake shop.” Instead, bigots shouldn’t run businesses in which they must cater to the general public. 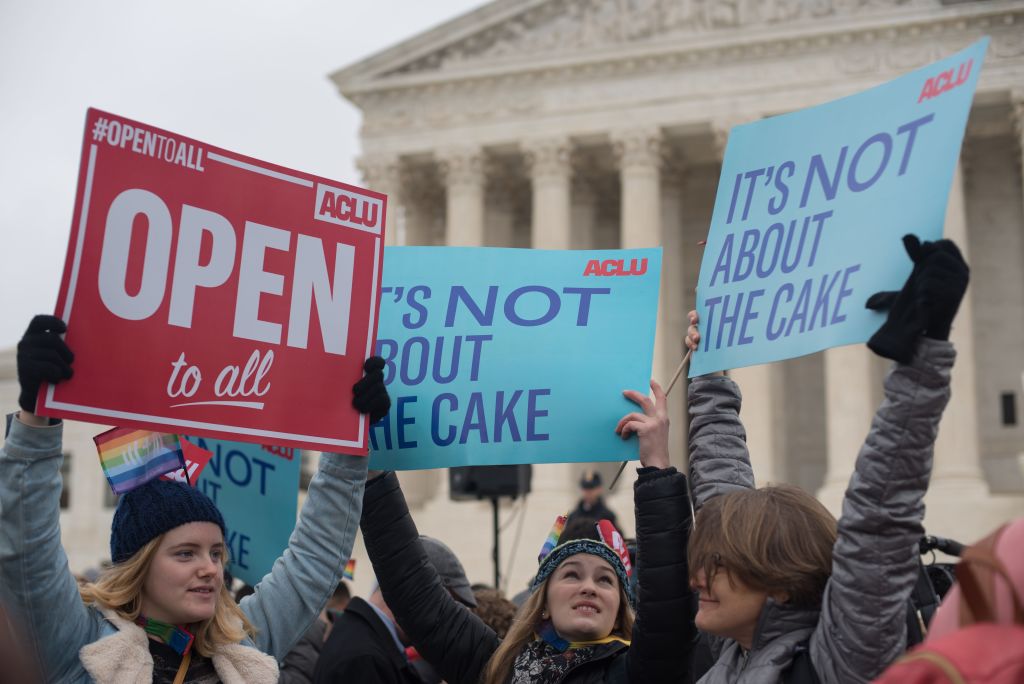 All of the conservative justices, such as Alito, Gorsuch, and Roberts, appear to be on the baker’s side. Justices like Ginsberg, Kagan, and Sotomayor tried to show their colleagues that a ruling in favor of the baker would put a hardship on same-sex couples, since as Sotomayor noted, in rural, mostly Christian areas, there might only be one or two businesses to begin with. Justice Breyer tried to argue that ruling in favor of Masterpiece would “undermine every civil rights law since year 2.” All of these are legit arguments, but they might not convince some of the more conservative men on the court.

It looks like Kennedy will be the one to ultimately decide, and he flip-flopped throughout the day, at times seeming to understand that a business being able to ban people from their store is a violation of peoples’ rights. But then he would sway towards the baker, and even asked a question wondering whether Colorado originally ruled in the couple’s favor because the state’s commission was “hostile” to religion.

He said, “Tolerance is essential in a free society. And tolerance is most meaningful when it’s mutual. It seems to me that the state in its position here has been neither tolerant nor respectful of Mr. Phillips’s religious beliefs.” He’ll have to decide, along with the other justices, whether this case is really about religious freedom or the freedom to delegitimize same-sex couples.