Facebook is quietly rolling out new face recognition features, and you might want to change your default settings

If you’re one of the literally billions of people who regularly use Facebook, it might be time to update your user settings. The social media giant is quietly rolling out a host of new features. While Facebook updates and changes are regularly met with no small amount of trepidation (and in some cases outright rage), this is one you should take a close look at. Because new Facebook face recognition features have arrived — and you might not like what they offer.

The new Facebook face recognition features include one trait in particular that is raising a lot of eyebrows. Users will now be able to see every image of themselves on the site — not just the ones they’re tagged in. Yes, thanks to the face recognition technology, users will have the power to see every single image of themselves that anyone uploads to the social network.

Aware of prior backlash to updates in general and privacy features in particular, Facebook is determined to give these new features a positive spin. The company states that this will help people to keep unwanted photos of themselves offline. (And hey, who doesn’t have a photo or two that they’d rather forget happened?) Additionally, it will allow you better control over your online presence and what people see in relation to you.

That being said, the Facebook face recognition features do have some somewhat sinister implications.

For starters, you should know that the default setting for these new features is “on.” You have to turn facial recognition off yourself.

By granting Facebook permission to track your face, you’re granting the social networking site a lot of power.

As critics have already asked, what’s to stop Facebook from tracking your entire life based on where you show up in Facebook photos? While people are all too familiar with handing over their privacy to websites (whether they know it or not), these face recognition features raise the situation to a whole new level — one we’re not sure we’re on board with.

What’s more is Facebook is sort of burying the update.

This post appeared in one of our editor’s news feeds. Not as a major announcement at the top of the page, and not via a notification. But buried deep in her news feed, many scrolls down. 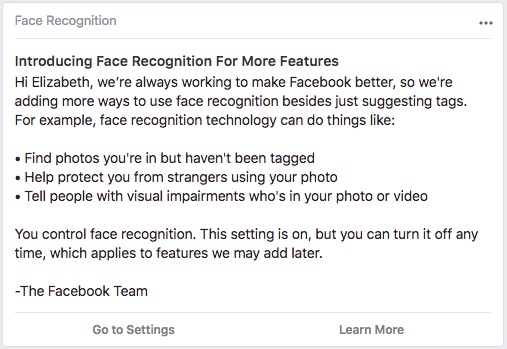 We totally get the appeal of permanently removing bad pictures on social media. But we’re not sure this is the best method. If you’re uncomfortable with Facebook tracking your face (and really, we can’t blame you), make sure to update your settings ASAP.