How to build positive, long-lasting New Year’s intentions for 2020

Just like every other person on Earth, I’ve committed to my fair share of New Year’s resolutions, and I’m the first to admit that most of them fell by the wayside. There was one year I committed to finally learning French, one year I committed to going for a run every single day, and another when I committed to reading two books per month. However, I’m still nowhere close to being fluent in French, I didn’t run every single day, and I only ended up reading 10 out of the 24 books. The point is, even though I’ve rarely seen my New Year’s resolutions through, I can’t help but keep making them. Why is that?

Upon reflection, I think it’s because I’m a hopeful, idealistic person, and the thought of abandoning old habits in favor of healthy new ones is very appealing even if it doesn’t always end up that way. I also think it’s exciting to commit to something new and unknown: What would happen if I went for a run every single day for a year? Would I eventually run a marathon? Who knows! While it might feel good to make the resolutions in the first place, there’s always that inevitable let-down when I don’t live up to my lofty expectations.

While some people use the two terms interchangeably and view New Year’s resolutions and New Year’s intentions as synonyms, other people see a stark difference between the two. Spiritual advisor Kristine Fredheim belongs to the latter category. “I think people have consciously abandoned ‘resolutions’ in favor of ‘intentions,’ because we are more than ever open to spirituality right now,” she says. “In my opinion, I find resolutions to be ‘I want this or that,’ but setting an intention is more of a wish of the heart. [It’s] energetically stronger just because you’re more aware of the energy you put into the process.”

To me, “resolution” sounds strong, finite, and intimidating, whereas “intention” sounds gentler and more approachable. Let’s take one of my old New Year’s commitments for an example: “I want to be fluent in French” sounds like a resolution. It’s sort of an all-or-nothing goal with a finite and absolute result, whereas “I want to improve my French-speaking skills” doesn’t have a specific parameter or restriction attached; it sounds encouraging and attainable. Both require me to put in the work and actively practice French, but the latter gives me more freedom and flexibility. Could changing the phrasing of our goals be the key to keeping a New Year commitment?

Learn to trust the process

While this could help, Fredheim suggests letting go and trusting the process. “To be able to keep a resolution, you also need to let it go,” she says. “As annoying as that sounds, it is a major key to the process of receiving. You want to trust that the energy you let go of will come back to you. If you hold your goals [too] tight, [then they] won’t expand and come back.”

In other words, let go of any unhelpful energy you might feel, such as frustration, pressure, or expectation. When fulfilling a New Year’s commitment, all you can do is keep moving forward and put in the necessary time and effort. Even if you feel like you’re not accomplishing enough or going fast enough, do as Fredheim says and “trust the process.” 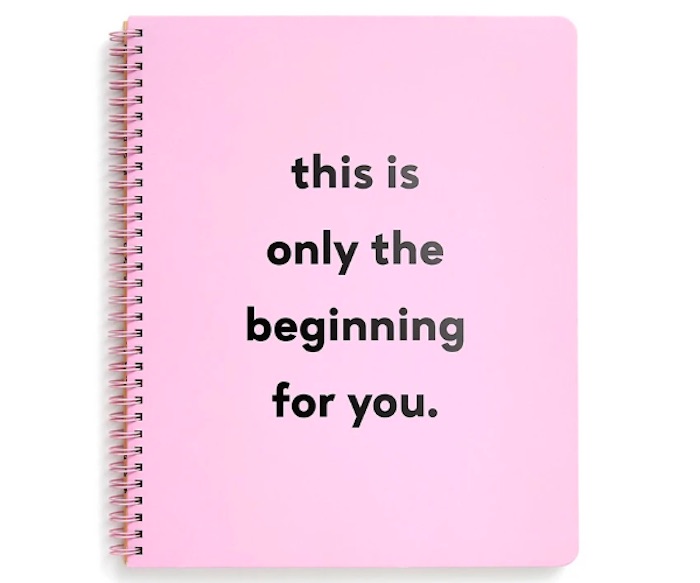 It’s also helpful to set “micro-goals” or small goals that act as stepping stones to the final goal.

"For every goal, there have to be micro-goals. Taking the time to make a plan and a timeline is critical. You want to be able to see specifically what you need to do on a daily basis to be able to reach your goals. For myself, I do a new check-in every new moon. [However,] I do recommend [checking in] on your goals [on a] monthly [basis]. This will help you to focus and be honest with your process. It’s also very helpful to journal the positive steps you have made [in] the last month. This keeps the energy at a high frequency, [which is a] great way to see what you would like to improve for the upcoming month," says Fredheim.

Be kind to yourself

Once you’ve honed in on a New Year’s intention and set specific micro-goals to meet on the way to achieving it, add some self-love into the mix. “Mirror-talk and positive self-talk will help the Universe deliver [your wishes] at a way higher pace,” Fredheim says. “You will show [the Universe] that you’re energetically ready to receive your dreams.” So speak (and think) kindly to yourself and care for your body and environment. Fredheim says, “Clearing your own space and eating a healthy diet helps the energy to flow more efficiently, which will help support your goals.”

This year, I’m being gentle with myself, yet proactive, by committing to New Year’s intentions and not the traditional hard-to-keep resolutions I’ve made in the past. Who knows? Maybe I’ll finally maintain a New Year goal because of it. At the very least, I know it will encourage me to engage in mindfulness and positive self-talk, so really, I have nothing to lose. Here’s to a healthier and happier New Year.