Okay. So, we can all agree that the “The Broken Man” had several classic Game of Thrones, “Oh, shit!” moments, yes? Perhaps, most shocking, was when the Waif stabbed our little Arya very, very badly. Like, “Okay, this is seriously not good” bad.

As a reminder, this is how we last saw Arya.

But, before you start counting Arya in your ongoing dead Stark family member tally (What, don’t you have one?), HBO recently released this official synopsis for next week’s episode, intriguingly titled “No One”: 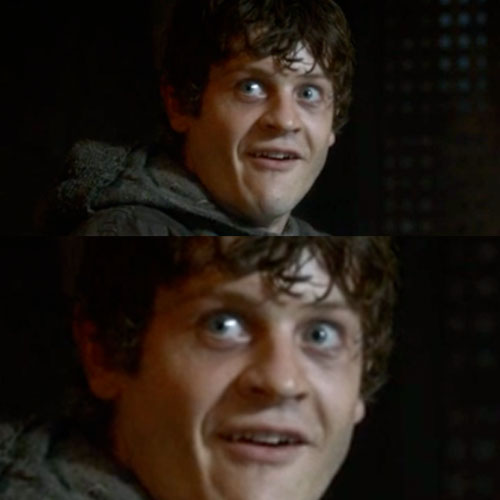 So, okay. From this very vague description, we can pretty much assume Arya doesn’t die (at least she isn’t dead yet). And we’re pretty sure the use of the word “faces” here is not a coincidence. [We see you, HBO!]

But, what do we suppose the test actually is? Is the test being able to survive this attack from the Waif? Or is it perhaps a final face-off with the Waif? The Waif certainly looks surprised about SOMETHING in the teaser for next week’s episode.

Also, is this Arya running away (then jumping away) from the Waif? (Probably.)

So, what “test” will Jaqen H’ghar (the main faceless man) have in store for Arya?! Guess we’ll just have to wait until Sunday to find out. UGH!