Update, November 24th, 2020: The plot thickens. We though we were fully over our manic episode that was set into motion upon last year’s realization that all Netflix Christmas movies are connected and taking place within the same universe. But the mania has returned, and this time, it brought with it sheer confusion.

On November 19th, the sequel to The Princess Switch, aptly titled The Princess Switch 2: Switched Again aired on Netflix and Vanessa Hudgens reprised her two roles as Margaret, the Duchess of Montenaro, and Stacy, the baker from Chicago, and picked up a third role, Lady Fiona (Margaret’s cousin).

Now, for those who followed along with our somewhat insane train of thought last year, you’ll know that The Princess Switch’s kingdom of Belgravia was referenced in A Christmas Prince: The Royal Baby thus confirming they are two kingdoms in the same sphere. But, Hudgens’ Margaret watches A Christmas Prince on Netflix, in universe, with her crush. This itself was confusing, but we were willing to let it go.

Sadly, the second installment of Princess Switch didn’t allow us let go of this detail, nor did it clear anything up. In fact, scrambled our brain even more.

In a blink-or-you’ll-miss-it moment in Switched Again, Amber and Prince Richard from A Christmas Prince are actually in attendance in Margaret’s big coronation scene at the end of the movie. So, therefore…both film’s characters are in the same place, and that means…What does that mean?!

It means our theory from 2019—that in NHMCU (Netflix’s Holiday Movie Cinematic Universe), A Christmas Prince is actually a documentary about another kingdom’s royal family—is 100% true. If that was the case, you would think there would be some mention from the duchess-in-hiding being like, “Oh, I actually know them” before she presses play, right?

Then again, she wouldn’t want to give away her true identity. Ah-hah!

And, no. We’re not reading too much into this. This is important.

If all these movies are actually existing in the same universe, including the formerly-mentioned The Knight Before Christmas (see below), and A Christmas Prince *is* an “authorized biopic about the Aldovian royal family,” as Twitter user @sprightlysound put it, that means that there are four Vanessa Hudgens characters afoot in the same land. That fact alone will make your head spin.

Netflix…we don’t know what you’re trying to do to us, but our head hurts and we have a sudden craving for hot cocoa.

Original Post, December 10th, 2019: When Netflix entered the holiday-movie ring in 2017 with A Christmas Prince, we had no idea what we were in for. In just two years, Netflix has woven together an entire cinematic universe with their smattering of holiday movies, and, if our calculations are correct, we could be in for a major Christmas movie crossover.

Now, in order for you to truly understand how this web works, it’s pertinent that you pay attention to the rant we’re about to go on. And yeah, it’s definitely going to help if you’ve seen all of the Netflix holiday movies—however, you’ll probably still get the gist if not.

Uh, scratch that. You definitely won’t. But we challenge you to try to follow along.

So, it all starts with A Christmas Prince in 2017, which takes place in the kingdom of Aldovia. For those of you who saw the flick, you’ll remember that a big plot twist revolves around an acorn Christmas tree ornament—in which the former king of Aldovia hid his last will and testament, declaring that his adopted son was the true heir to the Aldovian throne.

It was a big deal, and very important. 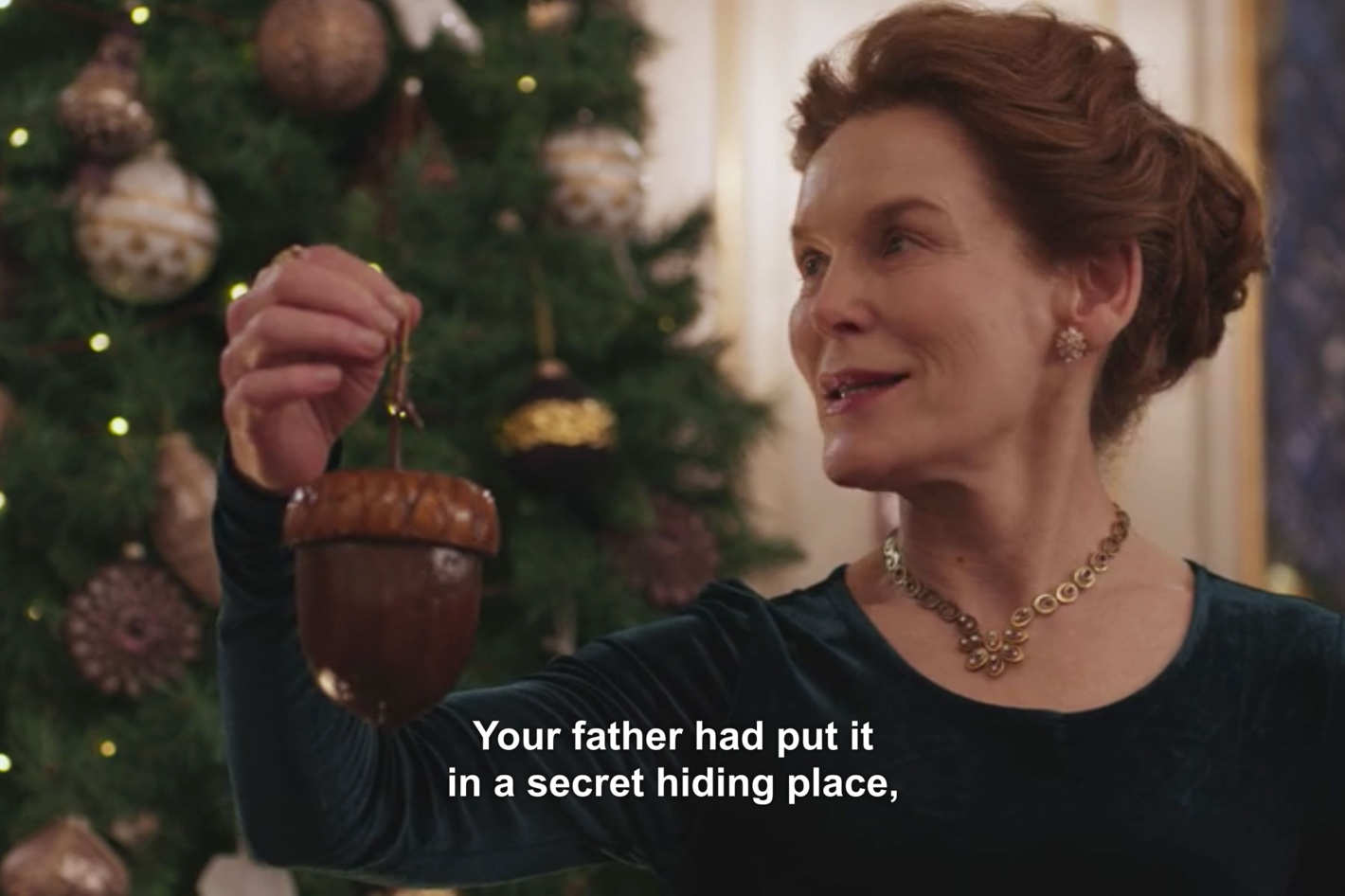 Log this information in your brain and fast forward to 2019—November 21st, 2019, to be exact. Netflix dropped The Knight Before Christmas starring Vanessa Hudgens.

This solidifies that The Knight Before Christmas takes place in the same universe as A Christmas Prince. But wait, there’s more.

Earlier this month, Netflix released the third installment of A Christmas Prince (A Christmas Prince: The Royal Baby) and in doing so, dropped another Easter egg for fans to hatch. In a select scene, a map of the Aldovian region is shown, and we find out that it borders Belgravia.

And later on, Queen Ming name drops Belgravia while complaining about the number of Belgravians clogging up Aldovia. She then dishes about how royals in Belgravia marry outside of noble classes. 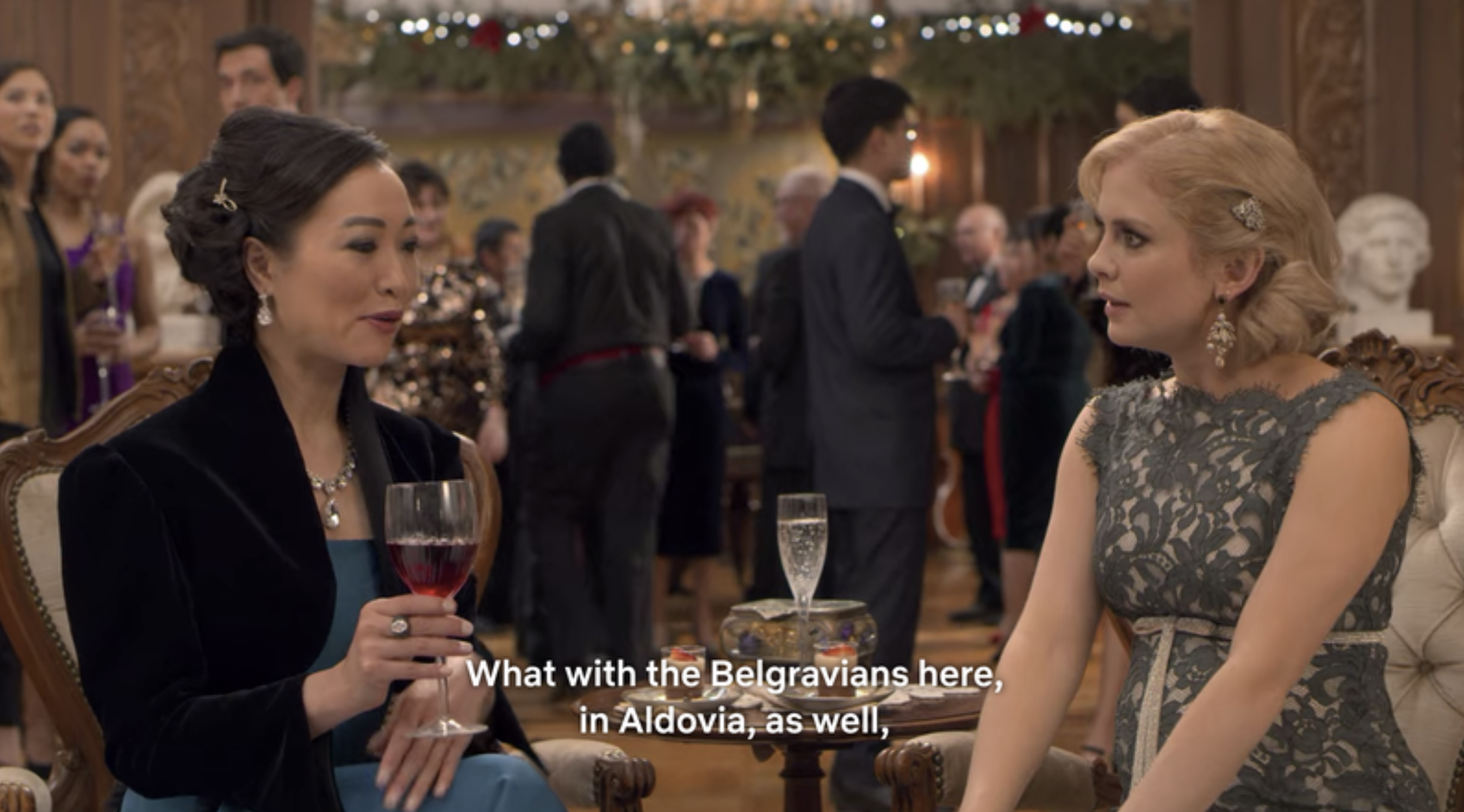 However, things go deeper than this.

In A Princess Switch, the duchess-in-hiding literally Netflix(es) and chills with her commoner crush and watches A Christmas Prince. Does this mean that in the NHMCU (Netflix’s Holiday Movie Cinematic Universe) A Christmas Prince is a documentary because it takes place in the same world as A Christmas Switch?

And does this mean that because we know The Knight Before Christmas *also* takes place in this realm, that there’s a chance that Hudgens’ character from Knight will be the slated third look alike character in the A Princess Switch sequel?

Netflix saw that we were all catching on to the overlapping, and tweeted out this map linking these holiday flicks, as well as their less-raved about Christmas movies, together.

"Welcome to Netflix’s Holiday Movie Universe," Netflix tweeted, "an interconnected world of eight films (and counting) where anyone could become a princess and your soulmate may be hiding in plain sight — or the past!"

And, as Netflix confirmed, the universe is not done growing. Our Princess Switch theory is looking real good right about now.

We don’t know about you, but our brains hurt. We’re going to go brew up a mug of hot chocolate and continue our Netflix-holiday-movie marathon so we can perfect our notes and hone our theories.