If you’re a fan of both nail art and TV shows about badass women that make you laugh, you’ve probably already heard about TNT’s new show, Claws, and tuned in to its premiere on Sunday night. (If you hadn’t yet, there’s still time to gather your crew over for a pizza-and-manis viewing party, so best get on it.) The show features Niecy Nash as Desna, the HBIC of a Florida nail salon who gets caught up in some serious southern mafia drama. Prepare yourself, because you’ll be inspired by the boss babeness of Desna and her tribe, and you’re going to want to book a mani session, STAT. The nails on the show are so eye-catching and fierce, they’re almost like their own individual characters.

It’s always fabulous when a TV show features incredible fashion and makeup, but it’s a REAL treat to finally have one that showcases stunning nail art. We had to know more about the people responsible for the claws seen on Claws.

Gracie J of @theeditorialnail is the key nail artist on Claws, assisted by Elissa Schell of @nailsby.elissa. From a very young age, Gracie J had a deep interest in nail art but didn’t think it was something she could make into a career. It wasn’t until she began working for MAC Cosmetics corporate that she realized she could actually make a living doing nails. She went to school, got her license, and gave herself a year to see how it would go. (Obviously, it went pretty damn well.)

Gracie and Elissa met while they were both at Paintbox nail salon in NYC. Both women created looks for editorial photo shoots and did nails backstage for Fashion Week before getting the Claws gig.

Other nail artists who created the nails seen on the show are Bianca “Beedy” Williams, Cristy Sanchez, and Mei Kawajiri (who might have inspired Kim Kardashian’s pierced nail look back in January).

While visiting the set of Claws in New Orleans, we had a chance to talk to Gracie and Elissa about the secrets behind all those magnificent talons.

HelloGiggles: What kind of challenges do you find working on set as opposed to runway or editorial?

Gracie: If there’s one thing that Elissa and I could agree on, it’s that we have to be chameleons — and be able to adjust, maneuver, and work quickly. Shit hits the fan sometimes and you have to be able to work seamlessly while making your job look easy. The thing with nails is, people don’t realize how much tedious work and time go into it. They think, ‘Oh it’s just a nail. Just put some polish on it and fix it,’ but the blessing and the curse of my team doing this is, when you make your job look easy, people think you’re not doing anything. The challenge is just being able to keep up with what’s going on and work quickly and efficiently and problem solve before anyone notices there’s even a problem. I think my team and I work pretty well. We’ve been able to be kick ass. It gets stressful sometimes, like any other job, but in the end, it’s rewarding. 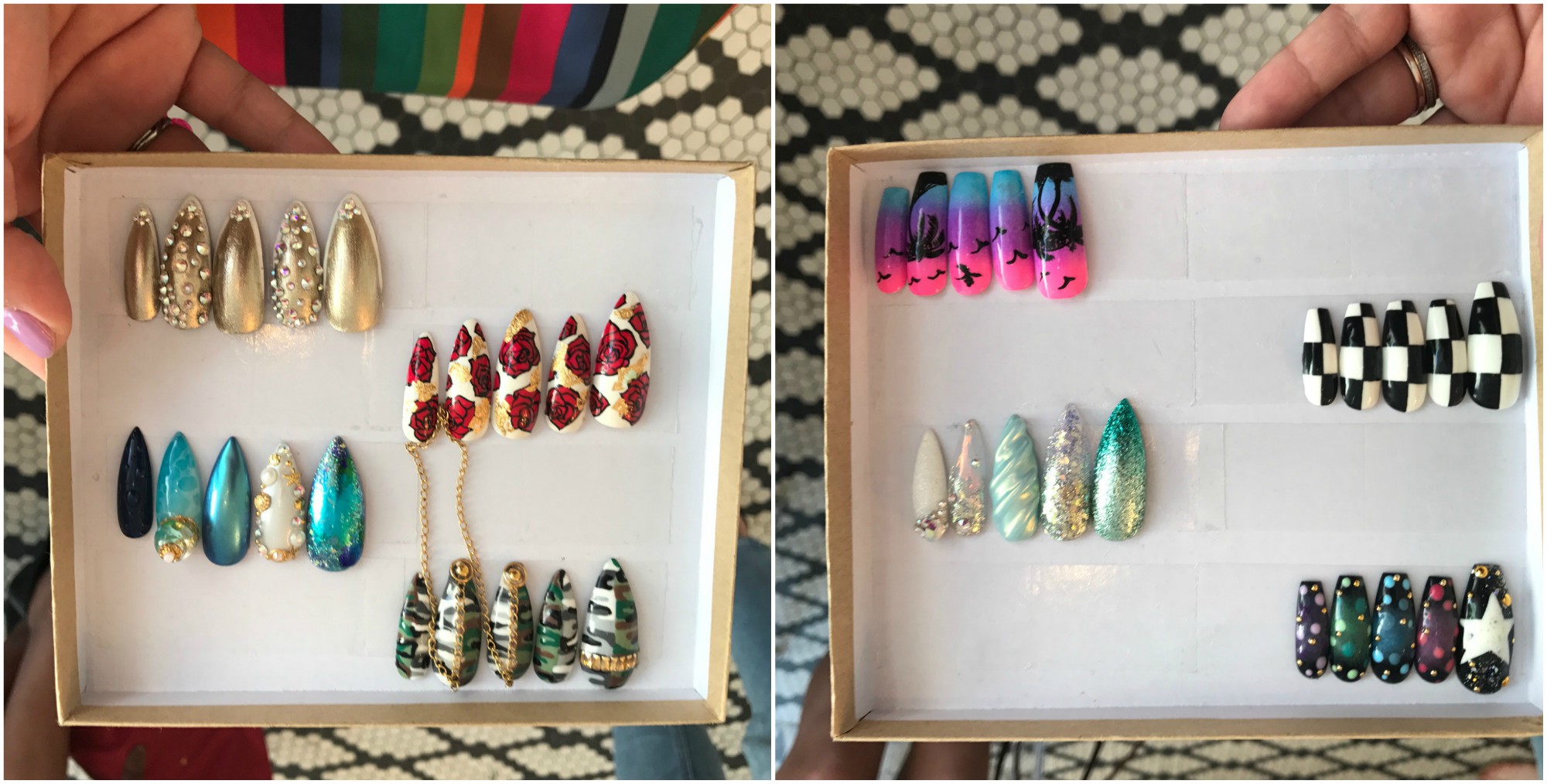 HG: How do you keep up with all the nail changes in the show? Are they actual acrylics or temporary nails?

Gracie: I don’t know if I should be telling the secret or not, but we’ll tell it anyways. Girl, loose lips sink ships. We use press-ons for the show. Any nail tech will tell you, first of all, to do an acrylic set for five women including day players and background, that’s time-consuming. So to make things work seamlessly and efficiently, you need the ability to craft press-ons that pass off as semi-permanent extensions on a nail. It requires a lot of attention to detail, a lot of specifics and delicate work that you have to do because you have to fit the nail perfectly to the client. We couldn’t do acrylic. Oh my god, that would be crazy. 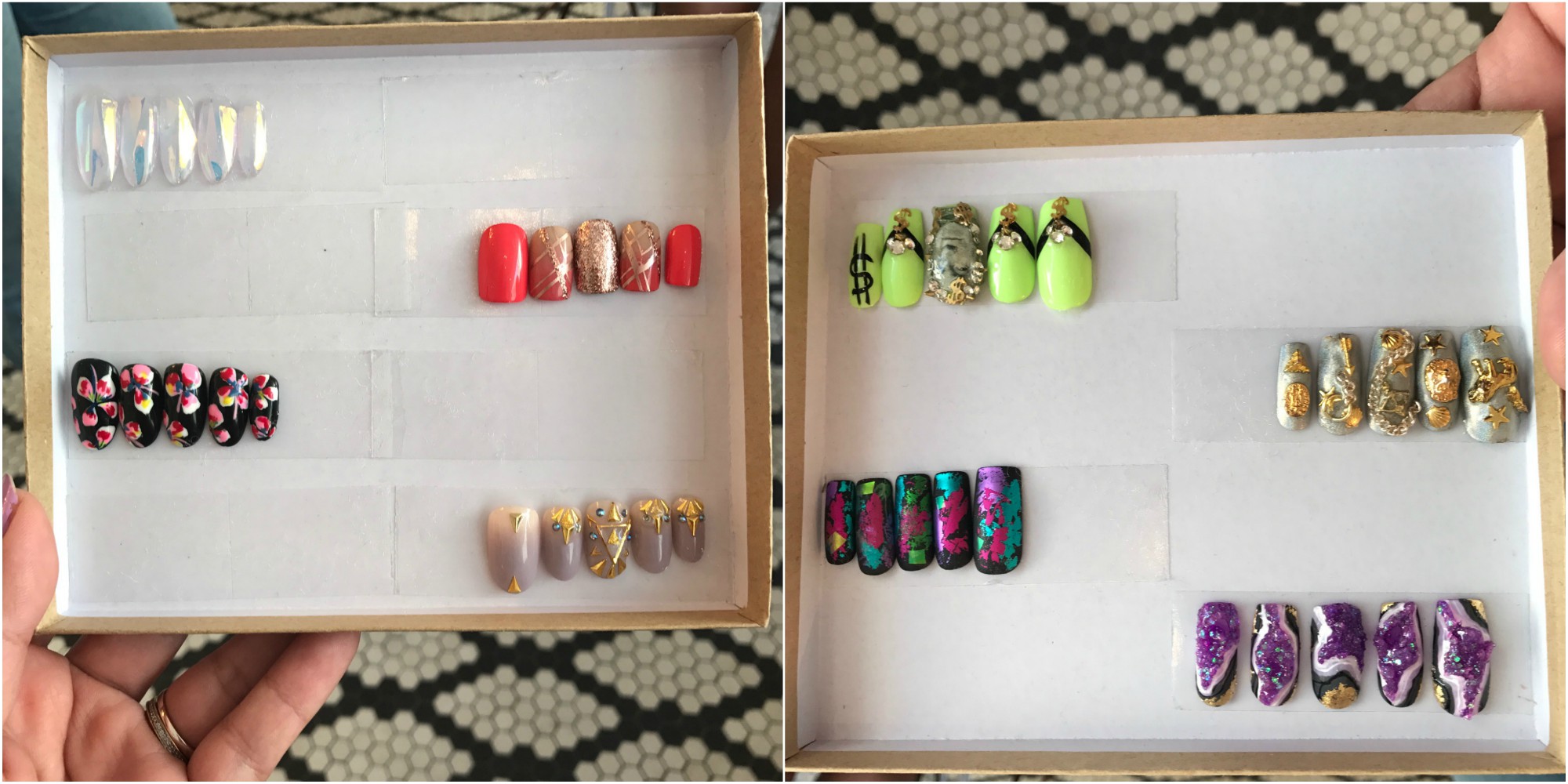 HG: The other nail artists who create nails for the show are Bianca “Beedy” Williams, Cristy Sanchez, and Mei Kawajiri. How exactly does that process work?

Elissa: Each nail artist gets an episode, so for example, right now we’re on Beedy’s episode and we just came off of Mei’s episode. The artist will either mail the nails to us or drop them off on set. Depending on what’s going on in the episode, we’ll consult with the writer and director on what type of nail we should give the character. We’ll pitch ideas and say, ‘Okay, this is what Virginia is going through in this episode, we’re going give her this kind of nail to have her embody that.’ So, if you pay close attention when you watch the show, you’ll see that the nails kind of reflect what the character is going through.

For example, Gracie and I created glass nails for a character because in one scene she was breaking into a house. And Virginia was in South Beach, so Beedy decided to give her kind of like South Beach vibes. In another shot, Desna was going on a date so Mei put roses on her nails.

HG:What are some nail trends that you think are going to be big?

Gracie: It will still be the chrome and iridescent, but it’s a cycle. It is the same for nails as it is for fashion — anything from back in the day just gets recycled and repurposed, but you’ve got to figure out a way to make it look better. Charms on nails are definitely still a huge thing and detailed nail art. We need to really get into that. I think a lot of consumers are not aware of the crazy shit that can happen on nails. People are used to seeing the glittered nail, the single color. There are portraits, rings, blings, chains, ornaments, and paintings that can go on nails. The possibilities are endless.

Elissa: I think the hanging details, like chains, are still going to be really hot. I saw this really cool one where, in the nail, it looked like a little window with a little diamond in it, and the diamond was kind of jiggling around. It was insane! So, definitely, things that dangle and have movement. Wire nails are still super hype. I think anything iridescent.

HG: I’m obsessed with the geode nails for Jen’s character. How did you create them?

Elissa: Gracie and I were brainstorming on how we would get that texture because other geode nails are kind of flat. And we wanted it to kind of pop and come to life, so it would look like you actually have geodes on your nails. We just mixed clear gel and a bunch of different purples in there, some chunky iridescent ones, and then we took the mixture and made it flat, and painted it on a piece of wax paper. We cured it in the light and it became a hard gel, and we chopped it up into little pieces, and mixed it into the existing gel to create this chunky, rocky mixture. Then, we just detail hand-painted it and put gold leafing around it, and drilled holes into the nails. These were a labor of love. It took a lot of hours doing those, but they’re our favorite. 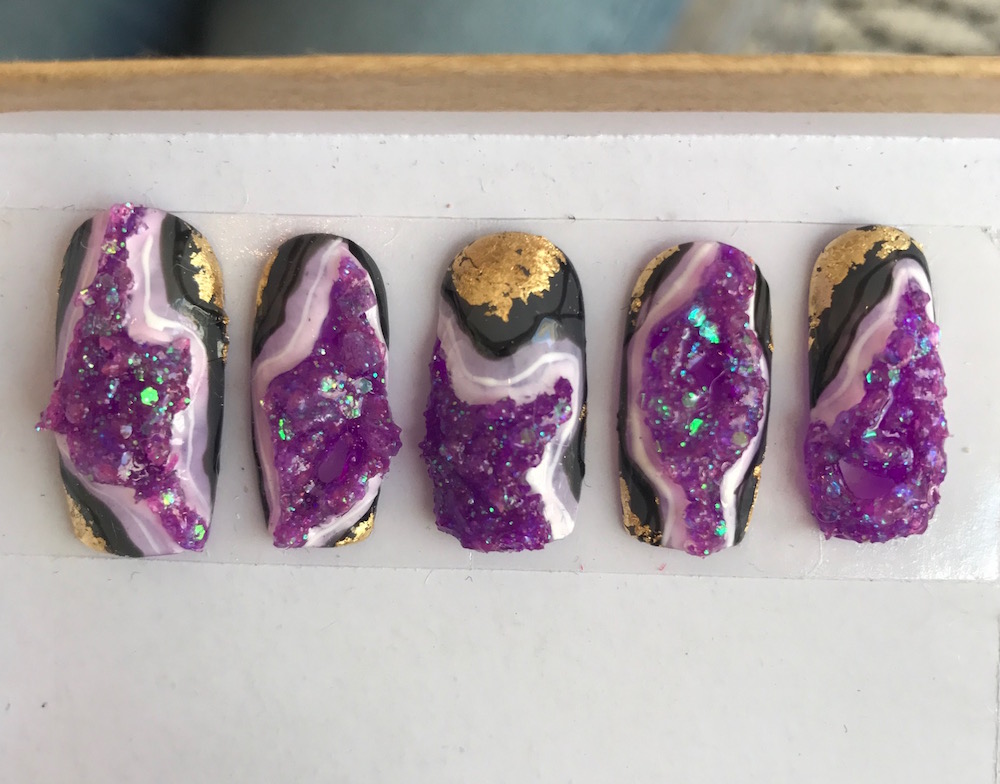 HG: What kind of nail would Desna never be caught with?

Elissa: A plain nail, girl. First of all, a short nail. Or a single color nail. I don’t want to speak too soon, but even if you see her in like a solid color, the accent nail will have like crystals and bling on it. I don’t think we’ve put her in a plain nail once this season.