Hours into our decision to go two weeks without consuming processed sugars, my mom Elizabeth sends me a text message. She was inquiring if she could eat a slice of pizza from the night before for dinner. I remind her that pizza isn’t permitted, and that’s when I get a note back saying “But it’s a shame to waste a slice of pizza, isn’t it?” I love how this woman thinks, but it’s also probably why I can justify having a slice of vanilla cake for breakfast. (Case in point: Vanilla bean — beans are healthy, dairy is part of a balanced diet.) My mom is, without a doubt, my best friend. We are so in tune that we have often shown up to events in the exact same outfit — down to the jewelry. (And no, we did not call each other in advance. We never do because it wouldn’t help, we’d likely forget what we agreed to and show up in matching hats anyway.)

My mom is someone who has my back every single day.

Two years ago, we agreed to move in together. This wasn’t something that I initially jumped at. Despite how much I love my mom, I worried that it was kind of weird to move in with her. But on our incomes, it was getting a bit too tight financially to live in downtown Toronto on our own. My mom works full-time at a public relations agency, and I produce, write, and work at a bakery. Not bad career choices, but Toronto is a ridiculously expensive city to live in.

Rather than ask friends or search online for someone to live with, it just made sense for us to call the same address home once again.

But after the decision was made, I honestly couldn’t help but feel my ego take this massive hit. It’s not just any roomie — it’s slightly different when the person moving in with you is your parent. But as my friend Kim wisely reminded me, these moments were ones to cherish. They were something to look at in a positive light.

And that is a wonderful, calming, and true statement — but what on earth would we do when I had a fellow come over?? AAUUUGGHHH!!!

Luckily, my love life is, well, it’s not really a thing right now…but dates do happen every so often. And when they do, my mom will text me, offering to see her sister for the night or stay with my brother and his family. On nights when my date and I haven’t decided our plans, my mom has called, desperate to come home because she’s finished wandering the mall and would very much like to go to bed.

In a way, it’s like I’m a teenager again, sneaking home with a cute guy very late at night — only to realize I forgot my key and have to knock so my parents could let me in the house.

(Yes, this actually happened once.)

Inevitably, though, it makes for a lot of laughs over coffee the next morning, and a bonding moment I couldn’t have appreciated 20 years ago. We can talk about romance a bit differently now.

The other night, we talked about how Eastern cultures view living with their elders in a different light than we do in North America.

It’s what is done, and that is that. But little by little, on this side of the world, it’s also becoming a lot more common for kids to move back home later in life. Income doesn’t allow for someone to live on their own, or the work isn’t there — whatever the reason, a lot more of us are returning to the nest.

It’s nothing to be embarrassed about! But I get it, the ego can take a knock…I’ve been there.

In my case, it’s allowed for me to continue to live in a city I love and pursue work that means something to me. While, yes, I could have gotten something similar with a roommate who is not my mom, this just means a bit more. As much as we like each other, my mom and I don’t get along all the time; my anxiety and panic attacks can make me a rather complicated soul now and then. I am someone who can react quickly and speak sharply when my brain runs away from me — but it’s part of who I am. My mom understands that. 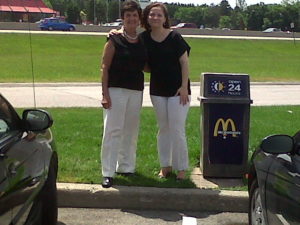 This might good be a good moment to change gears slightly and point out that my parents are still a couple. They met 50 years ago and recently celebrated their 40th wedding anniversary. My dad actually lives outside of the city, and they see each other a few days a week when my mom isn’t working — which may answer the question of “What’s the secret to making a marriage last 40 years?” (Live in different cities?!) He comes over though, and it’s been happening a bit more since my brother and his wife had their first child. So on some weekends, it’s like I live at home again. An it’s not so bad, really. I didn’t appreciate it as much when I was younger, to be totally honest with you.

It’s looking as though our living situation will change in the next year, as my parents want to be closer to their grandson.

I’ll also be 40 next year, and am anxious to see where a new decade will take me!

As the late, great Nora Ephron once said, Above all, be the heroine of your life, not the victim -- and I’d like to think that’s what my roommate has taught me too.

My mom has really taught me that for all of my life, and living in such close proximity once again, she’s been able to remind me more than a few times. And for that, I’m grateful. 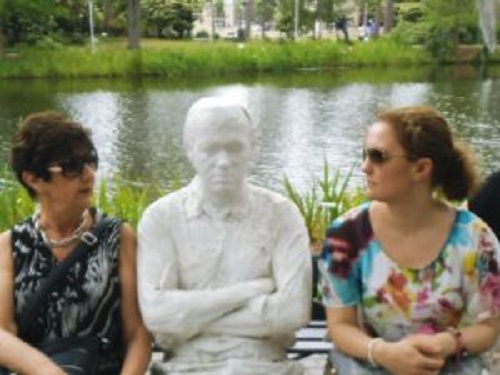 Oh…and she ate the pizza, reasoning that the crust was thin so there probably wasn’t much processed sugar in it anyway. I’ll give her points for creativity on that one.