My journey in sexuality from ally, to queer, and everything in between

I was always a passionate, staunch supporter of LGBT rights, long before I fully came into my sexuality — but it was a war I could only fight from afar. I’d march in with the cavalry, sweep the foes off the field, and leave elegantly, letting people have their hard-earned party in peace.

But now, having realized my bisexuality, I’m expected to dance — and I don’t know how to move without feeling like a party crasher.

This invitation didn’t come as a total surprise, though. In hindsight, like most things concerning one’s sexuality, subtle hints of my identity become clearer over time ­— I distinctly remember first discussing bisexuality at a sleepover at age 9 or 10, and thinking, “Why isn’t everybody that way? It makes so much more sense!” This wasn’t as popular an opinion as I thought it should be — I may have felt, in the back of my mind, that all this would someday impact me far more directly than I knew.

Also, it’s not like I’d ever been averse to things traditionally thought of as queer. Not to engage in any stereotyping here, but I’ve watched the entirety of Glee, and I loved High School Musical! I love female pop artists, and will only listen to country music if a woman is singing it.

When my queerness hit me like Newton’s apple — one low-hanging fruit that had been scratching my head forever — that just meant my dating pool had doubled, and parties were about to become much more fun. 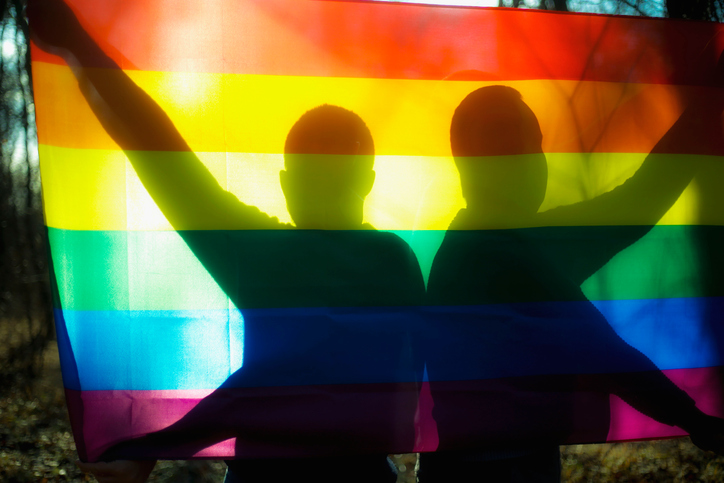 Still, the rainbow felt like something to gaze at, but never touch.

I thought it wasn’t my place, my flag, my party. I was just a good-willed visitor.

Even now, referring to the LGBT community as my community still feels a little like cultural appropriation. My tongue stumbles before rolling out the words, assuming that it just did a morally terrible thing. Every queer person has struggled to manage the balance between self-hatred and self-acceptance, and I’m not exempt; but my sense of inadequacy has picked a weird direction in which to flow here. false

I’m extremely comfortable, happy, proud, and confident about my sexuality, and have been for a long while. I’ve never experienced shame or huge internal turmoil about any aspect of my sexual identity, which I know makes me very lucky. I feel blessed! — and I’m not religious, so that is a word I use sparingly. But I’m just now figuring out how to feel comfortable about my sexuality within a larger group.

Maybe it’s the resistance in the LGBT community to accept the B in the acronym. I don’t want to have a foot in both worlds — I’m not “half” queer, and I don’t wish to be. But sometimes I feel like an unwelcome creep, my queerness a trench coat I’ve put on just to hang out with the cool kids. It doesn’t feel great.

This Pride Month, I’ve been feeling prouder than ever, and eager to claim LGBT culture and history as my own, loudly and stubbornly, until it doesn’t feel like I’m intruding on a space that wasn’t built for me.

I’m putting the work in: educating myself, seeking community — I’ve even started listening to Lady Gaga! I still prefer the Glee version of most songs, but maybe that’s the crux of it: Once I carve my own space, it can be anything I want. I get to live my own version of my sexuality.