Millennials get a bad rap. We’re often derided as entitled, self-centered babies in adult bodies, but the truth is, or at least what we’ve discovered, is that we are one of the most socially conscious generations to date and we’re taking to social media to speak out for what we think is right.

Since the rise of fast fashion, stores like Lulus, ZARA, H&M, and Forever21 have been dominating the mass market with new, trendy designs for less than the cost of lunch. With new styles released each week, fast fashion has become single-handedly responsible for the rise of “disposable clothing” and the increasing problem of textile waste in this country. That, combined with the all too common issues surrounding fast fashion, including slave labor, unsafe working conditions, and toxic waste surrounding textile mills and factories, the fashion industry is one of the most resource intensive and polluting industries on the planet. What once made fast fashion so awesome for so many of us is also now what makes them so uncool— manufacturing cheap, knock-off versions of designer styles before they’re even off the runway. While this has been the norm for some time, these corporations have now taken to coping the designs of small, independent designers as well.

We like to say that our company, HFS Collective, is on a mission to liberate women from their baggage. We create hands-free bags using only sustainable materials and pride ourselves on ethical and local manufacturing which ensures that each person that makes our bags is paid a fair, living wage in healthy and safe working conditions. This is why we were recently devastated to discover a clone of one of our most popular belt bags pop up on a major fast fashion retail site in three colors. 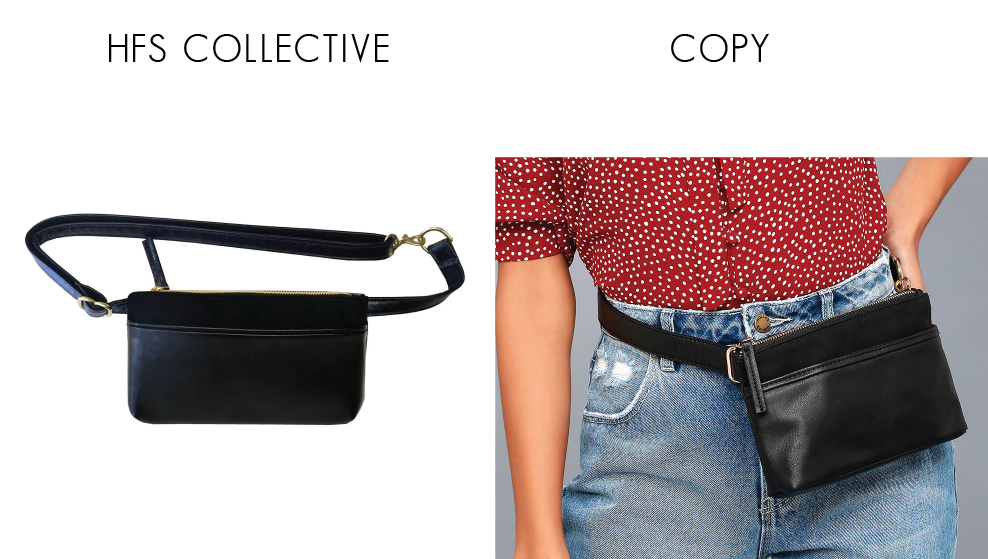 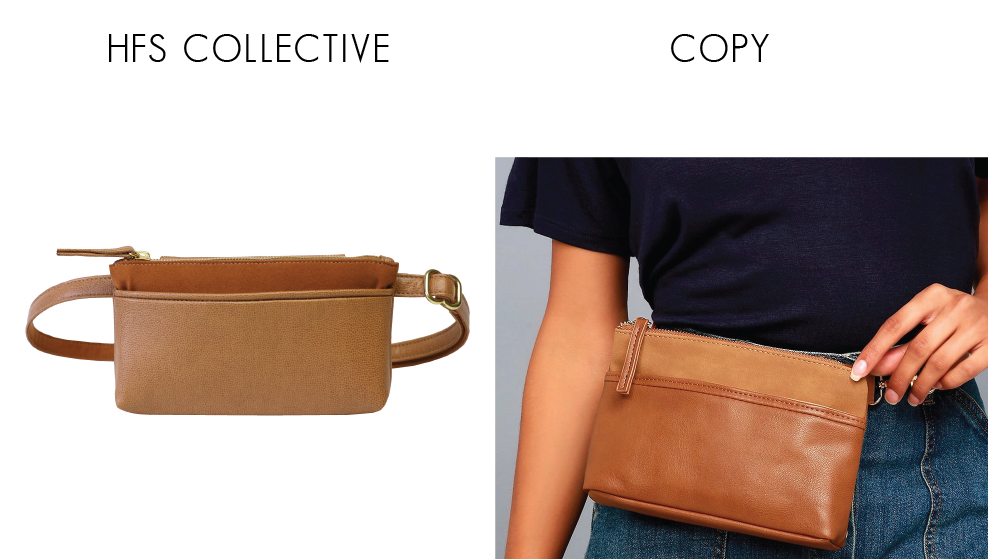 As a small independent designer, all of our bags are our original designs that have taken us many months to perfect. We design each style, wear the prototype around for several weeks, noting what works, what doesn’t and create several versions before a final one is sent into production. Our greatest challenge is finding materials that are both beautiful and sustainable. To see cheap knock-offs of them on a fast fashion site after so many months of development was heartbreaking. The worst part, however, was the fact that these knock-offs were being sold at a full retail price tag of $24, which is less than the cost of our American labor alone.

This felt like a punch in the gut especially because we realized that there wasn’t really much we could do about it. The current law is not written to favor designers.  According to Susan Scafidi, founder of the Fashion Law Institute at Fordham University, the three types of legal protection available to designers are copyright, trademarks and patents. While designers can often protect things like illustrations, jewelry and prints under copyright, anything considered “functional” is excluded and unfortunately, this includes the majority of fashion design. As Scafidi puts it in an interview with Fashionista.com, “for 100 years in the U.S., the copyright office has said fashion is functional.” Trademarks, on the other hand, work to protect a brand name, as well as certain symbols and logos associated with it and only as long as they’ve registered them under protection as a trademark. Lastly, patents are reserved for inventions that serve a function. Many designers are now trying their hand at securing design patents, however these can run anywhere between $1500- $3000 per style, so it’s easy to understand why such an investment might not be feasible for a small brand.

Even if we had gone through the time-consuming and expensive process of applying for a design patent, it takes about a year to acquire one, long after the fast fashion brands would be done with our design, as they cycle through new styles each week. Even with a patent, we would still have to hire an attorney and sue them, which would be another expensive proposition.

Feeling pretty helpless, we reached out to a few of our “maker” friends for advice and were surprised to learn that this same thing has also happened to several of them. Unfortunately, they all seemed to agree that the options for recourse were slim to none. It appears that mass market retailers are now realizing it’s easier to copy the designs of small independent brands than larger ones, as small brands have fewer financial resources for recourse in addition to less visibility, so they’re less likely to be called out on it. According to Scafidi, “there are companies that are absolutely predatory searching for smaller brands, especially because smaller brands have comparatively less effective trademark protection.”

Our friends did, however, suggest we share the story with our online community because they were the only ones who had the power to help. As we’re not normally ones to cause a fuss, this was was a bit scary for us — like the moment of truth, wondering if anyone would actually care. Hello, anyone?! What happened next completely blew our minds and in truth, made us cry. Our community was extremely supportive of us personally and also put tremendous pressure on the retailer to rethink their decision, commenting on its Facebook page and Instagram photos, as well as posting Instagram stories and tagging them so much so that the company not only took notice, but ended up pulling the knock-offs from their site as well.

Interestingly enough, we are not the only small brand who took to social media instead of a lawsuit and won out in the end. Other brands like TuesdayBassen and ForestBound are among many others who found justice this way and had their designs pulled from the sites.

I guess there are many lessons to be learned here. Even though I’m a millennial myself, I learned from my peers that it’s okay to stand up for what you believe in; to not be tricked into thinking you can’t change something that seems bigger than you; to not be fooled into thinking you have no power when you’re up against big corporations. Your most powerful asset is your voice and the good thing about social media is that it’s a tool you can use to express yourself and speak up for what you think is right. I guess that is the power of millennials at their best.