More than pumpkin pie: What is the actual story behind Thanksgiving?

Even if Thanksgiving is your favorite holiday, part of you probably knows that this food-friendly celebration’s origin isn’t what you were necessarily taught in elementary school. Before you gather ’round the table, take some time to learn about the real story behind Thanksgiving — from what really happened in colonial America to how it became the holiday that we celebrate today. Educating yourself on the history of Thanksgiving will make you feel like you earned your turkey and pumpkin pie this holiday.

The Thanksgiving story that is often told is that the British colonists who landed in Plymouth, Massachusetts and the native Wampanoag tribe enjoyed a peaceful meal together. And that’s why we get together today and give thanks.

However, the history of Thanksgiving is not as simple as all that and even historians don’t necessarily agree on all the details behind the holiday’s origin.

To put your mind at relative ease, there really was a harvest feast between the Plymouth pilgrims and the Wampanoag Indians in 1621, according to Encyclopedia Britannica. The pilgrims had hunted for wildfowl and in one day, gathered enough to feast for about a week. Whether turkey was the main meat or not is up for discussion, but Encyclopedia Britannica and Smithsonian magazine agree that the first Thanksgiving meal most likely contained more goose and duck than turkey.

As the approximately 50 pilgrims celebrated their bounty, about 90 of the Wampanoag Indians, led by their chief Massasoit, arrived at the colonists’ settlement and joined them for the feast. The Native Americans supplemented the meal with venison from hunting deer, and the two groups ate and socialized together for three days. We know these details thanks to a letter from Edward Winslow, a leader in the Plymouth colony, who was there.

"That state of affairs, though, deteriorated after his death as a result of tensions from the Europeans' poor treatment of Native Americans, cultural encroachment, and increasing desire for land."

Massasoit’s son, Metacom (called King Philip by the English), led the war, but was killed. The colonists displayed his head on a spear at Plymouth for years — a vast change from the peaceful time the Native Americans had experienced with the colonists at that 1621 feast.

As for that 1621 feast, as it was a secular event, the pilgrims wouldn’t have called it a “Thanksgiving.” According to National Geographic, it wasn’t until 1841 when a Boston publisher named Alexander Young printed Winslow’s letter and referred to the event as the “First Thanksgiving”  that we started calling the 1621 feast that. A spokesperson for the living-history museum, Plimoth Plantation, told National Geographic that thanksgivings were actually fasts — not feasts — in the 17th century, so the name is a bit of a misnomer. Also, the Smithsonian Institute wrote that true, religious thanksgiving services were held in America long before the 1621 event.

The name of the event being historically inaccurate is not actually the troubling aspect behind the history of Thanksgiving. It’s the claim that another, more bloody thanksgiving, where hundreds of Native American were murdered, is what inspired our modern holiday. While this awful massacre did happen, with some digging, we discovered it may not actually have anything to do with Thanksgiving. Of course, that doesn’t mean that Native Americans haven’t suffered tremendously due to colonization and its aftermath — it just may mean that the history of Thanksgiving isn’t as bad as you thought. 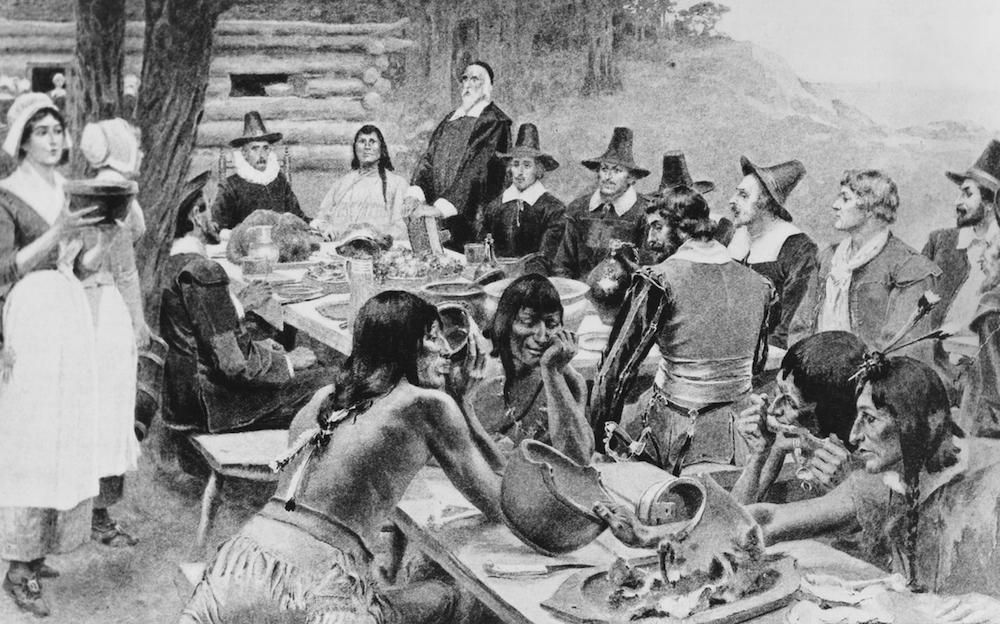 What is this Thanksgiving massacre story? Well, it gets a bit tricky — historically speaking — but here goes. Multiple sources, including the Huffington Post, Daily Kos, and Philly Mag, have written about how our modern Thanksgiving could actually be referring to when British colonists murdered Native Americans during the Pequot Massacre in 1637.

Philly Mag wrote that after the massacre, “the Massachusetts Bay Governor William Bradford designated ‘a day of thanksgiving kept in all the churches for our victories against the Pequots.’” And the Daily Kos wrote that the Massachusetts Bay Governor claimed, “A day of Thanksgiving, thanking God that they had eliminated over 700 men, women and children.” Yet, there are disparities between both of these accounts — and they may not be historically accurate when it comes to their references to Thanksgiving.

Yes, this awful massacre absolutely did happen. Encyclopedia Britannica states the Pequot War ended with the massacre of 400 Pequot Indians in less than one hour by Connecticut soldiers and Native American allies of the colonists, which included the Narragansett and Mohegan tribes. The war was particularly brutal and noted to be the “first sustained conflict between Native Americans and Europeans in northeastern North America.”

For their 2015 miniseries Saints and Strangers about the real story of Thanksgiving (which was noted to not be as historically accurate as it claimed by the Indian Country Today Media Network), the National Geographic channel released a historical account of Thanksgiving, which stated that Bradford did proclaim a “thanksgiving.” Yet, it wasn’t after the horrific Pequot War. According to Nathaniel Philbrick, the author of Mayflower: A Story of Courage, Community, and War, two years after the 1621 Thanksgiving, “Bradford did proclaim ‘a day of thanksgiveing’ to pray in thanks after rains ended a ruinous summer drought that had nearly destroyed their crops.”

Also, a fun fact in this rather unfun topic, Mad Men’s Vincent Kartheiser portrayed Bradford in the Nat Geo miniseries.

Who’s right? Well, former Chief Curator of the Plimoth Plantation Jeremy Bangs wrote for the History News Network that “what is completely untrue is the idea that the Pilgrims of Plymouth Colony participated in the 1637 Pequot massacre.”

So, does this mean that we are celebrating a massacre every fourth Thursday in November? Or, that debunking the myth about Thanksgiving is kind of a myth in itself? Well, we can’t imagine it was the intention of one of the greatest presidents in America’s history to honor the slaying of hundreds of people. When Abraham Lincoln first proclaimed that Americans should celebrate Thanksgiving in 1863, it was to bring the nation together — not divide them further during the Civil War. 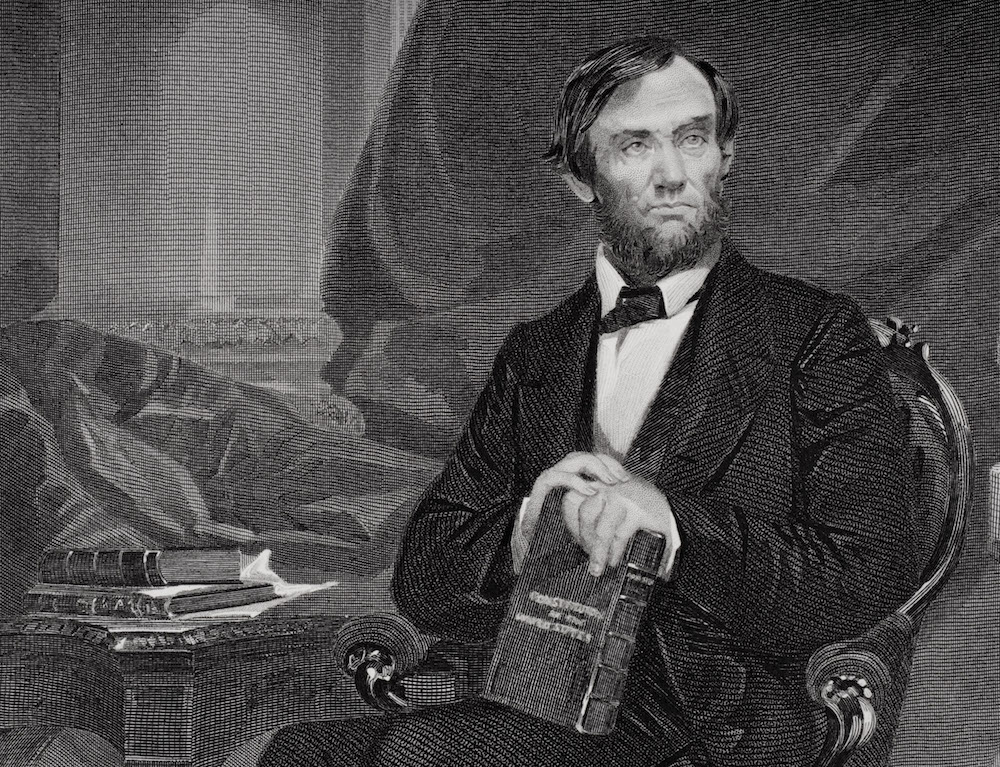 Regardless, if the first Thanksgiving was marred with tragedy, it’s important to be educated on the atrocities that have been committed on the people who lived in America long before the British colonists came. And how that still impacts the surviving Native Americans. While this information doesn’t mean you shouldn’t enjoy your Thanksgiving, the holiday is all about reflection. And one thing to be grateful for: That the 1621 feast that we do associate with Thanksgiving involved two different groups of people coming together in the name of a peaceful, food-filled gathering.