You’ve heard the cries. You’ve seen the memes. But, now we have charts and graphs to prove that Mondays are the least sexy day of the week. Not entirely scientific findings, but still super interesting, Dan Kopf of Quartz pulled together some data to back our Monday blues.

He grabbed online grocery shopping data from Instacart to see just what consumers are purchasing, and when. As it turns out, Americans were least likely to purchase condoms on Mondays. And since “condoms” equal “sex,” Kopf’s findings hint that people just aren’t having sexy times on the first day of the work week.

The debate over which day of the week is the least sexy came about over Twitter.

When taking a look at the same data initially, Twitter user Owen Phillips found that people are least likely to stack up on their prophylactics on Wednesdays. That’s right. Hump Days are the slowest days for condom sales overall, according to his findings.

But, when Kopf took a second look at the Instacart data, he found that Mondays actually gain the least amout of condom sells than any other day. 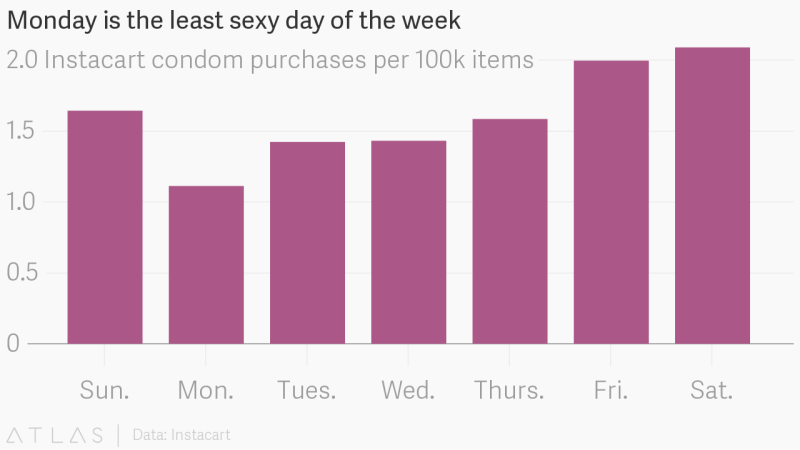 "If instead of looking at totals, we examine the proportion of all items bought that were condoms," Kopf wrote in his study published on Quartz. "Monday is clearly the least sexy day of the week."

However, both gentlemen found that condom sales are the highest over the weekend.

OK, OK. So, the data doesn’t prove that Americans aren’t bumping and grinding on Mondays as much as any other day of the week, per se. But, you have to admit…it does kind of make sense. Mondays are widely known as the most stressful and dreary day of the week.

Patrick Allan of Lifehacker also brought up the potential fact that Americans could be using their surplus of condoms from the weekend for Monday’s activities. He just may be onto something…

But, until actual scientific data is found, we’re totally siding with Kopf on this one.