My mom ran a bustling singing telegram business when I was a kid. I can only imagine what it was like being our neighbors, watching the endless parade of characters leave our front door. There goes Mrs. Brown again, dressed as a chicken, a clown, a dancing Christmas tree, Carmen Miranda, a bag lady, a tap dancing cockroach; but the people of our tiny Indiana town of Amo learned to live with it.

My parents moved there in 1984 with my three older sisters when I was a baby. Mom only had one character back then — the standard singing bellhop. So the citizens of Amo adjusted for our weirdness the way the economy adjusts for inflation. Slowly. Peacefully. One gorilla suit at a time.

This was, in no small effort, thanks to the fact that Mom was always working overtime to make all the “normals in the neighborhood feel at ease. 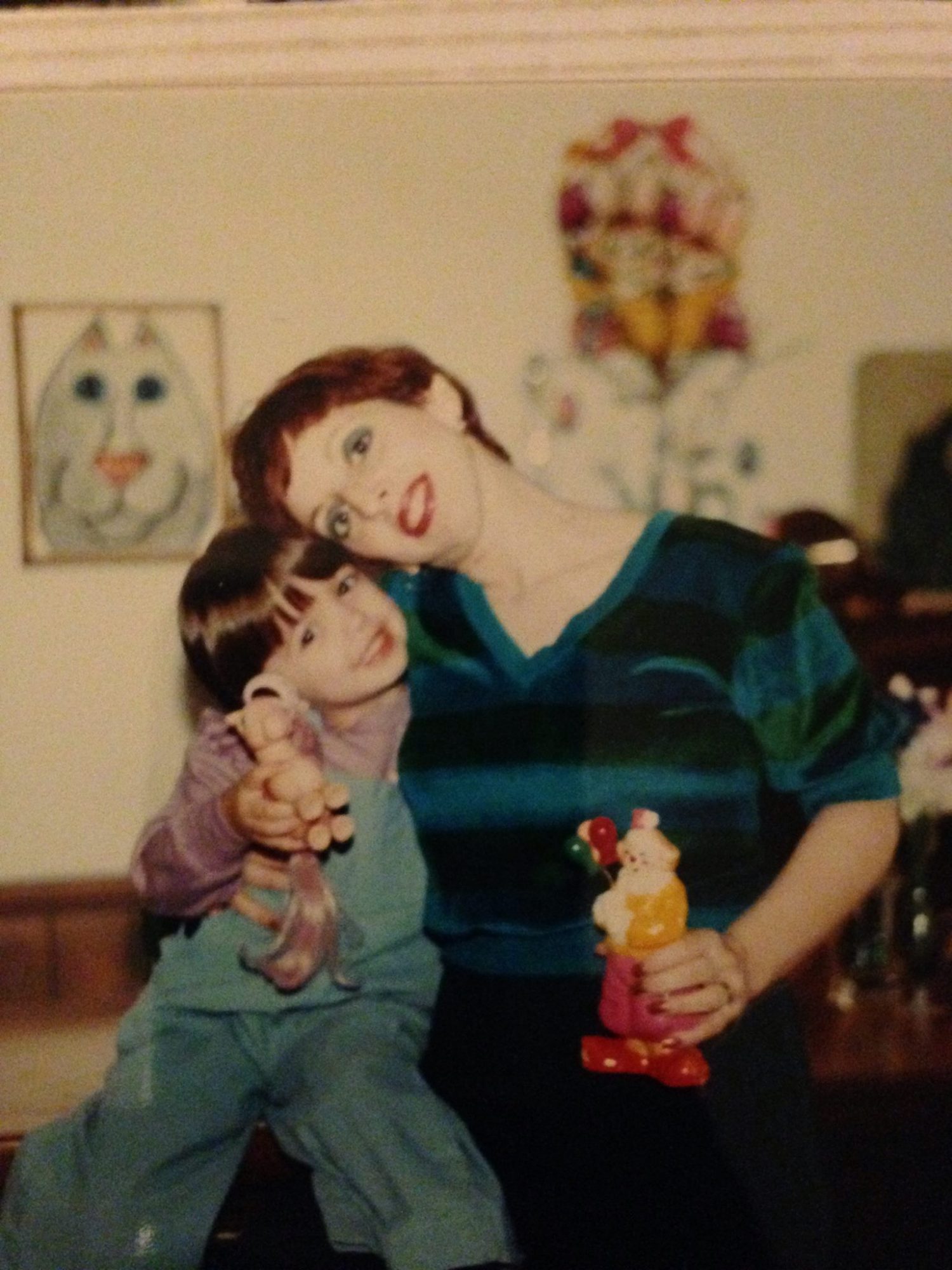 For example, nobody asked her to cover her costumes. But every time Mom dressed for a belly dance performance, she wore a plush purple robe as a cover-up. Granted, it had her stage name, ~Asmara~, written in glitter on the back, but that was just the kind of thing good neighbors did — lend a cup of sugar every now and then and cover up your coin belt on the way to a gig. Of course, when she left in her robe, she also wore heavy stage makeup and carried a giant sword she balanced on her head while she dancing.

When my older sisters acted embarrassed about her job, the final word was always, “Well, I’m wearing my robe. This, followed by an incredulous look and a long silent pause, signaled the end of the conversation. What else could she do? 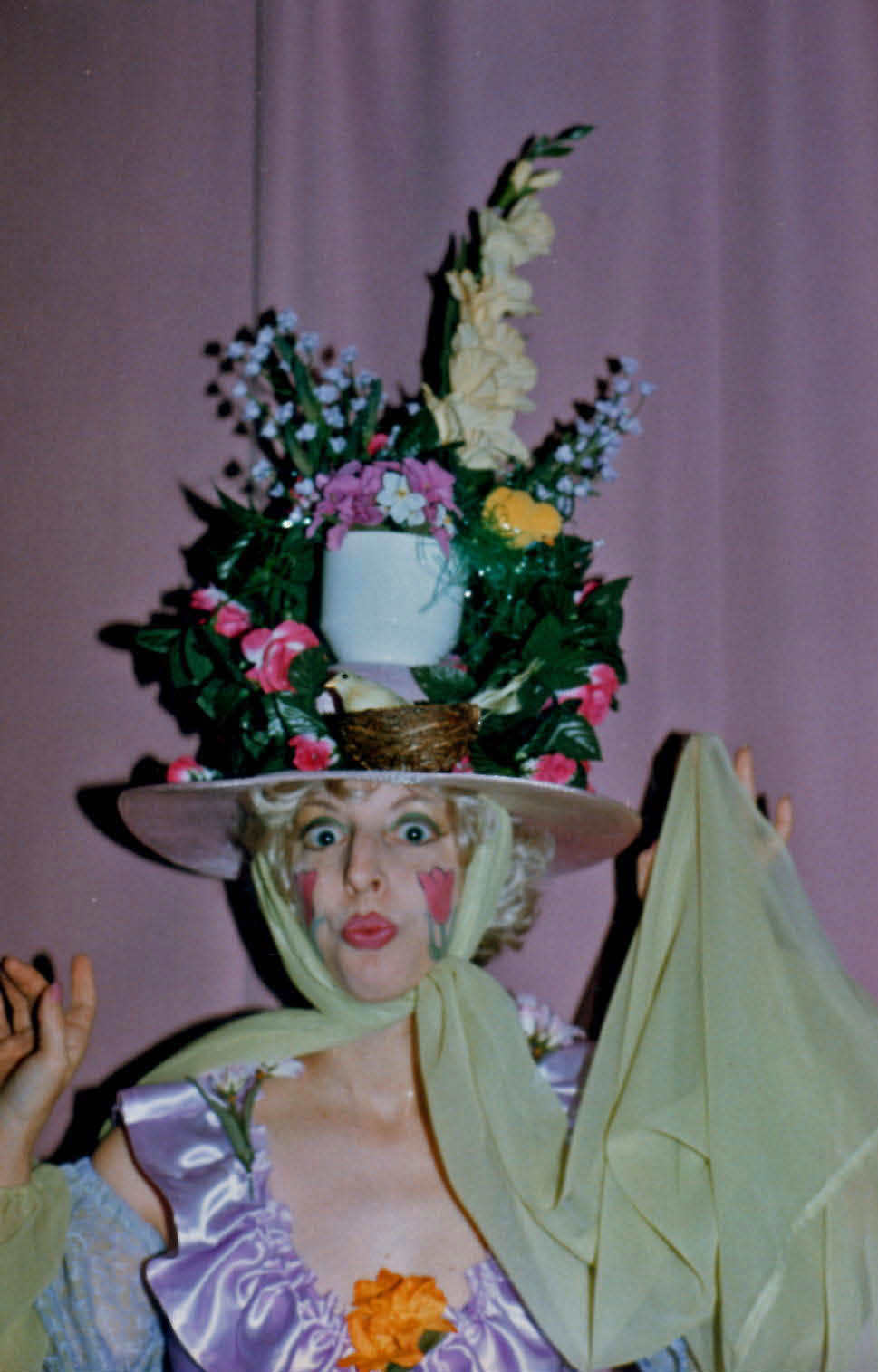 My first brush with entertainment-based shame happened in the fall of third grade. I loved what Mom did for a living -- until she was going to do it at my school.

One day at recess, my teacher informed me that the staff hired her to come and roast our principle during a convocation. It was his fortieth birthday and they wanted to pull out all the stops. “Won’t that be fun?” she asked, ruffling my hair as I tried to hide my shock. The world went quiet for a minute, the way it does before you pass out.

For those unfamiliar with comedy terminology, allow me to describe “roasting” the way one might to an alien. To roast someone is to purposefully embarrass them with various jokes about their shortcomings and flaws, both physical and intellectual. It’s sometimes called insult comedy. It was an integral part of Mom’s routines. 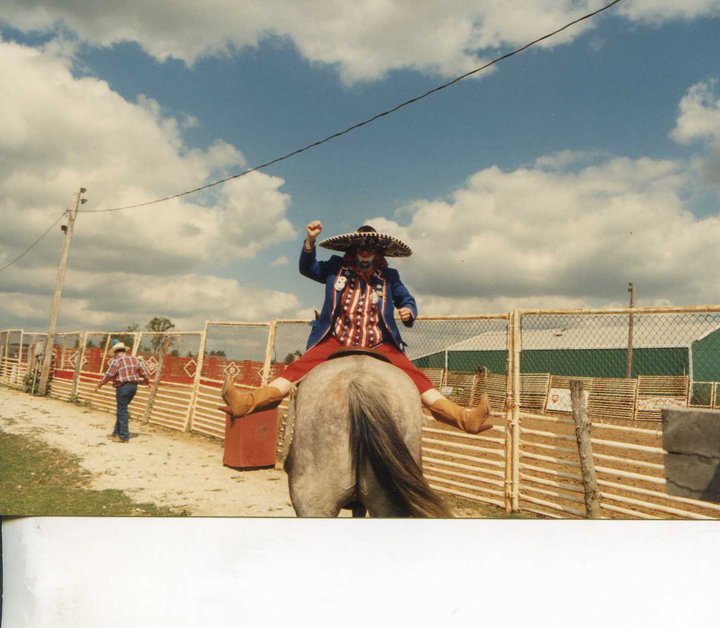 My sisters warned me this day was coming, that someday Mom’s job wouldn’t seem so cool anymore. For every birthday that came with free balloons, they would lean in and spin the warning yarn like they were in a horror movie. “Someday all the balloon animals and free Halloween costumes in the world won’t make up for this.

I never believed them. It’s one of those things you can’t know until you know. There are a series of shocks required to jolt you into maturity. This was my first. My teacher leaned in again, “Won’t that be fun?” she said. It echoed in my mind, “Won’t. That. Be. FUN?”

By third grade, I was fighting a losing battle with popularity. The mean kids at my school were like a mini biker gang, cornering girls in the bathroom if they didn’t like the way they wore their socks or teased their hair — isolating students if they didn’t wear cool clothes or seemed too smart.

I managed to remain anonymous through first and second grade. But by third grade, my own weirdness was emerging. I was helplessly turning, like a werewolf on a full moon.

When you’re a toddler, all you need to bond with other kids is a shared love of Kool-Aid and crayons. As you age, how you socialize depends less on nature and more on nurture. My nurture involved a showbiz mom, a brilliant bookworm father, a literal rocket scientist uncle, and professionally creative grandparents with a pet rooster. I’m immensely proud of my family heritage, but it reads more like the invitation list to an Addams family reunion — and I was living in a glittering, early-nineties world of Tanners and Winslows. I’d rather be an Addams any day, but it makes every-day conversation difficult. 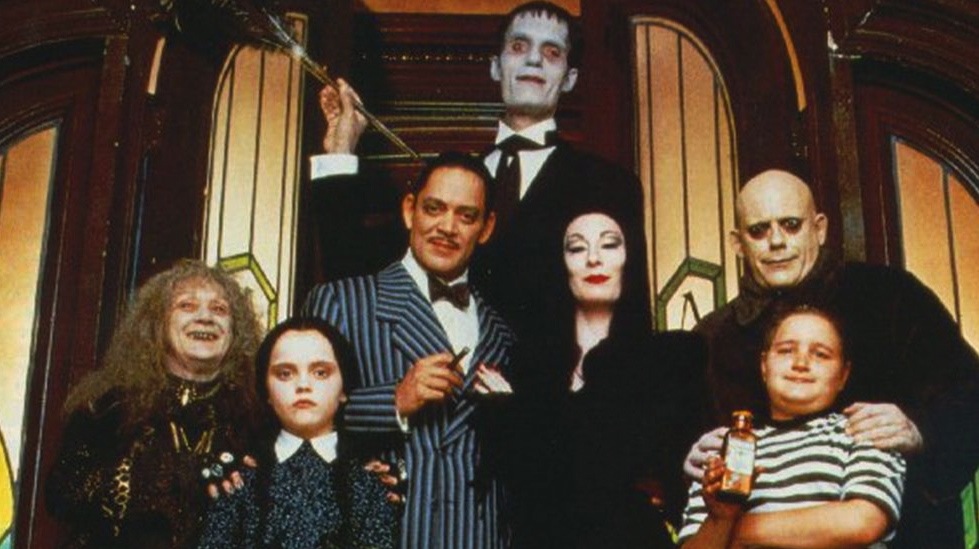 Things in my world were tenuous and I was afraid this would be the nail in the coffin to my potential coolness.

Talking with Mom wasn’t an option. I didn’t want to hurt her feelings. She never embarrassed me before, and I didn’t anticipate it happening again. So I concocted an elaborate plan. On the day of the convocation, I would pretend to be sick. The plan for my return to school the day after was simple, total denial. If anyone asked me if the insult comic yelling at the principal was my mom, I’d just say no pleasantly and repeatedly. If they persisted, I’d act like it was some other local comedian with their own singing telegram business from the next town over. If that didn’t work, I’d just freeze and hold totally still until they went away.

Her character for the convocation was called “The Old Old Courier.” It was a version of the bellhop with a long gray wig, drawn-on wrinkles, and one blacked out front tooth. The Old Old Courier playfully humiliated the birthday boy or girl with fake telegrams from friends and family — congratulating or consoling them about being freshly “over the hill.” Sometimes she’d even enter blowing a trumpet, playing it as loudly and as terribly as possible. 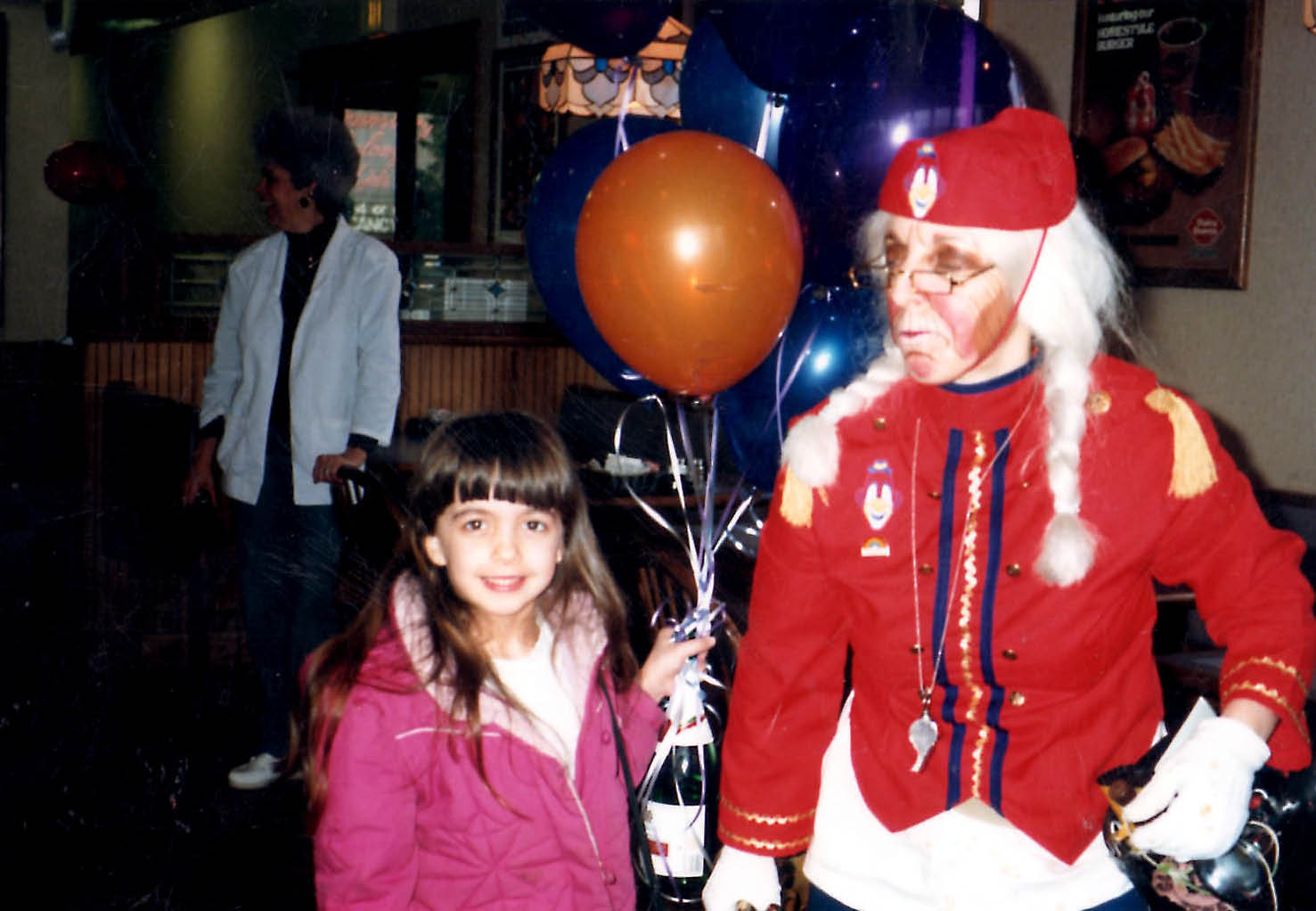 In the days leading up to my principal’s birthday, I processed my new anxiety.

I wasn’t embarrassed of my mom. I was worried about her. Worried the kids in my class would misunderstand her, the way they misunderstood me.

Before the gig, as she was applying her makeup with a surgeon’s precision, she casually said, “I’ll need you to hold the balloon bouquet in the car and hand it off to your teacher when we get there.” But all I heard was, “Honey, your plan to avoid the roast has been foiled.” I had to go with her. And — because I was “sick” that day — I had to wear my pajamas for the sake of continuity.

The drive to school was a blur. By the time we walked in the front doors of the school, the roar of the kids gathered in the nearby gym was deafening. One of the teachers, not one of mine, greeted us at the door. They were so taken with Mom’s costume they hardly noticed me. I floated in behind them as they discussed final arrangements.

The principal didn’t know she was here, he thought he was getting a birthday cake and that’s all. Oh, but that wasn’t all. They were going to make him sit in a wheelchair in the middle of the gym and unleash my mother on him. I was comforted that nobody seemed to mention me. All I wanted to do was fade into the background.

The massive room that was normally the site of my dodgeball-induced humiliation was now transformed into a stage.

Every single student in the school was occupying the bleachers, high on the fact that they were out of class for a special event. They were probably expecting some kind of motivational speaker or a squad of jump ropers…not an eighty year old bellhop yelling at their principal.

Mom readied herself, tugging at the bottom of her uniform, bringing the trumpet to her lips. I tried to hand the balloon bouquet to someone, anyone…and then she just went, blowing the trumpet. With my spindly arm outstretched to hand the balloons off to anyone who would take them, the teacher who greeted us said with a big smile, “Oh, I’m sure you’ll want to see this!” and pushed me through the door, standing behind me blocking my only possible exit.

There I was, in my Little Mermaid pajamas. I was standing in front of the entire school. If there was any hope of blending, I was certain the collection of ten brightly colored balloons floating over my head would thwart that.

I searched the crowd for the biker gang girls, expecting them to be staring at me and nodding their heads in disapproval. But none of them were looking at me.

As my panic started to fade, I realized they were looking at Mom.

There was uproarious laughter. Everyone was standing to get a better look. Even the teachers were so enamored; they didn’t care about keeping the kids seated.

My principal’s face was red — medical problem red. But he was smiling wider than I had ever seen him smile. She stopped blowing the trumpet and started making funny faces into the crowd, holding her hand over her eyes like she was looking for someone and jutting her lower jaw out glaring at the kids. They couldn’t stop laughing. Everyone settled in, smiling, looking at whoever was sitting next to them and poking them with an elbow or a finger as if to say, “Oh, this is gonna be good.”

My mother, all four feet eleven inches of her, saved me from the dream-like humiliation of being shoved in front of my entire grade school in my pajamas by being so funny that no one ever looked away.

Audrey Brown (in super-secret third-person) began writing professionally in 2007. She has an MA in creative writing and her work has appeared in magazines like Geek Monthly, as well as on-air via public radio and on-screen at the Los Angeles Comedy Festival. You can find her at her website, on Twitter, on Instagram, and anywhere they serve high-quality vegan doughnuts.