Everyone has had those moments where your parents blame or accuse you of something that just isn’t true. We’re pretty sure that we had many a row about where our parents thought we had been when we’d actually just been studying with a friend or our shopping.

Of course, parents only get angry because they’re worried about all the things you *could* be up to. But for Rachel Gelmis, when her school accidentally sent her mom the wrong random drug test results, things got pretty hilarious.

The incident, which actually took place four years ago, has recently gone viral after Rachel decided to share the experience on Twitter.

After being reminded by the popular app TimeHop, Rachel decided that she just had to post the hilarious #throwback event. false

"Last week I was drug tested at Pinnacle. This was the first time that I had been drug tested and I knew I was clean, of course," Rachel's Facebook status reads. "However, when the results came back, I was told that I had traces of THC, cocaine, heroin, meth, benzos, barbiturates in my system."

While Rachel knew that this wasn’t the case, her mom wasn’t totally believed it.

"A few hours later," Rachel wrote, "the school contacted my mom and told her they had completely misread the test and I was negative for all those substances." 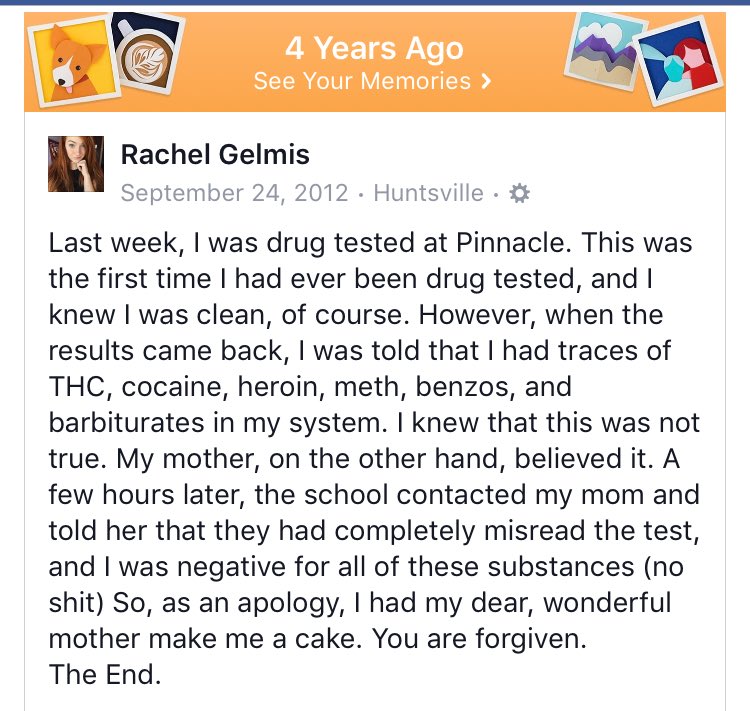 Following receiving the results, Rachel went on to explain that her mom had already started researching rehab facilities. false

"I was so scared. I kept racking my brain for a reason that I might have tested positive for everything, and I had no idea," she told Buzzfeed.

When the all the mishap around the results was finally cleared up, Rachel requested that her mom apologize by baking her a cake.

Little did she know that her mother would bake the best and most hilarious apology cake of all time. 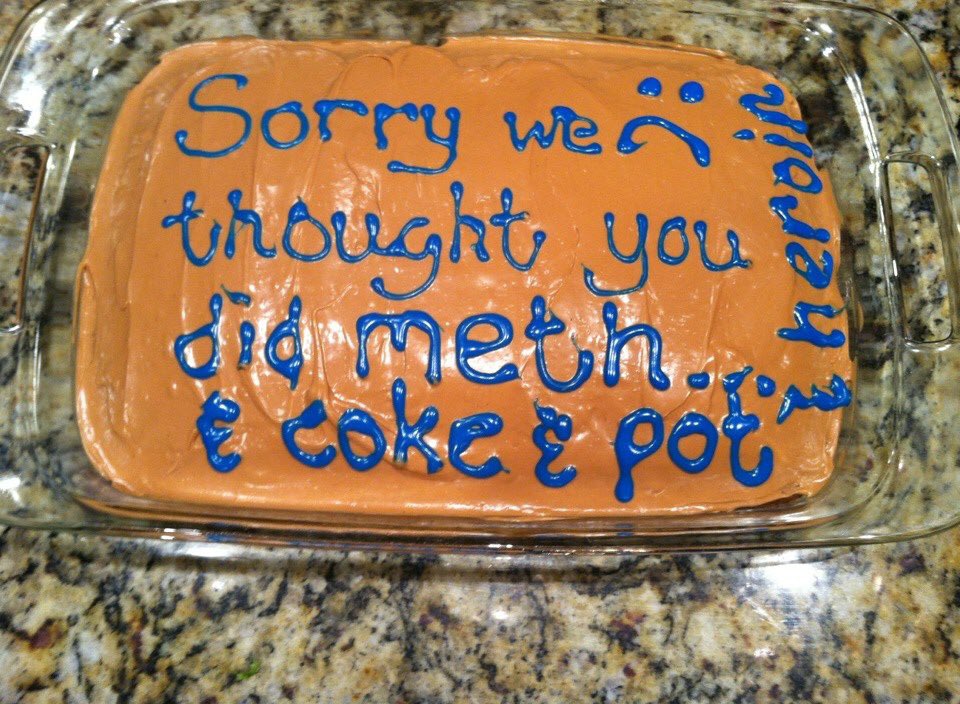 "Sorry we thought you did meth...and coke and pot and heroin," the bright blue lettering reads atop the orange frosting.

This is just too much.

Asking her mom about the event more recently, Rachel revealed that she didn’t actually think she was on all those drugs. false

"Straight from my mom when I asked her about this:'I didn't really think you were doing all of that, it was just overwhelming at the time,'" Rachel shared on Twitter. "'I just thought you were smoking weed or something. That's what I expected at least.' Ty mom"

Rachel, who is now a computer science major at University of Alabama, said that her and her mom have bonded over the experience, and now look back on it and laugh.