Milk is a staple in many people’s diets—with their morning cereal, splashed into their coffee, or as an ice cold glass with some warm cookies before bed. But instead of getting milk the old-fashioned way—from good ol’ cow utters—recently, plant, grain, and nut-based milk alternatives have skyrocketed in popularity. If you’re vegan, lactose-intolerant, or just want to avoid dairy, there are many options for you to sip that smooth milky texture that you crave.

The wide variety of milk alternatives filling grocery store aisles can be overwhelming, and it’s hard to know which is the best choice for you. From nut, to grain, to plant-based milks, there’s bound to be a milk alternative that meets your dietary needs and tickles your taste buds.

So, how much healthier are nondairy milk alternatives?

Each one is different, but keep in mind that there are some things to watch out for when browsing the aisles of your local supermarket—sometimes that trendy packaging can be deceiving. We rounded up the nine best milk alternatives and have all of the deets on their nutrition facts, health benefits, and, of course, tastes. 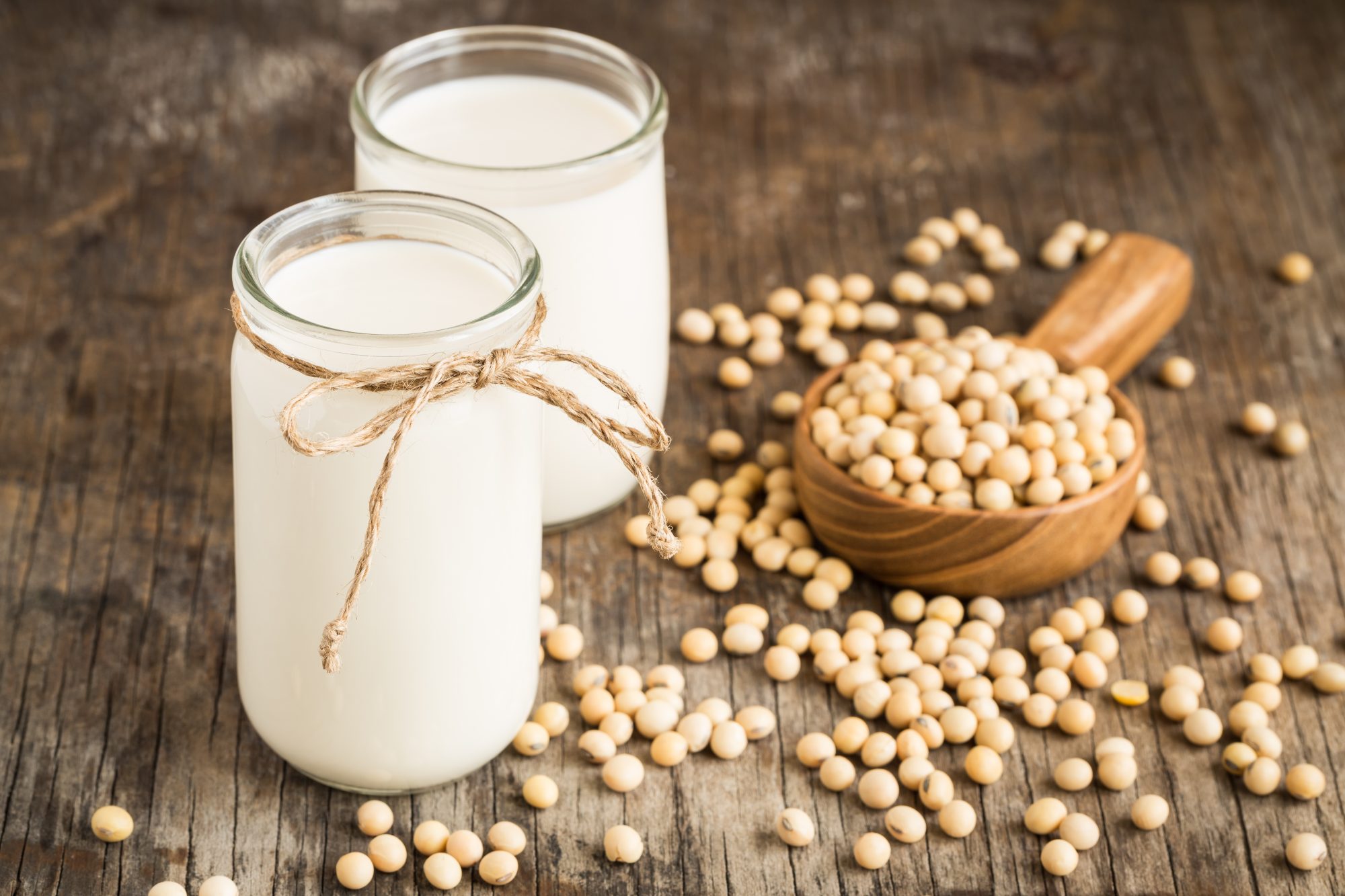 All hail the original plant-based milk alternative to pop up on the market: Soy milk. This trusty milk alternative is a favorite for many who choose to avoid dairy milk. Made from either real soybeans or soy isolate, soy milk is similar in terms of nutrition to cow’s milk. But because it’s made from a plant, soy milk is naturally cholesterol free and low in saturated fat. It’s also rich in protein and contains about half the amount of calories, fats, and carbohydrates as cow’s milk. That being said, soy milk contains more calories than some other milk alternatives, coming in at 80 calories per cup. 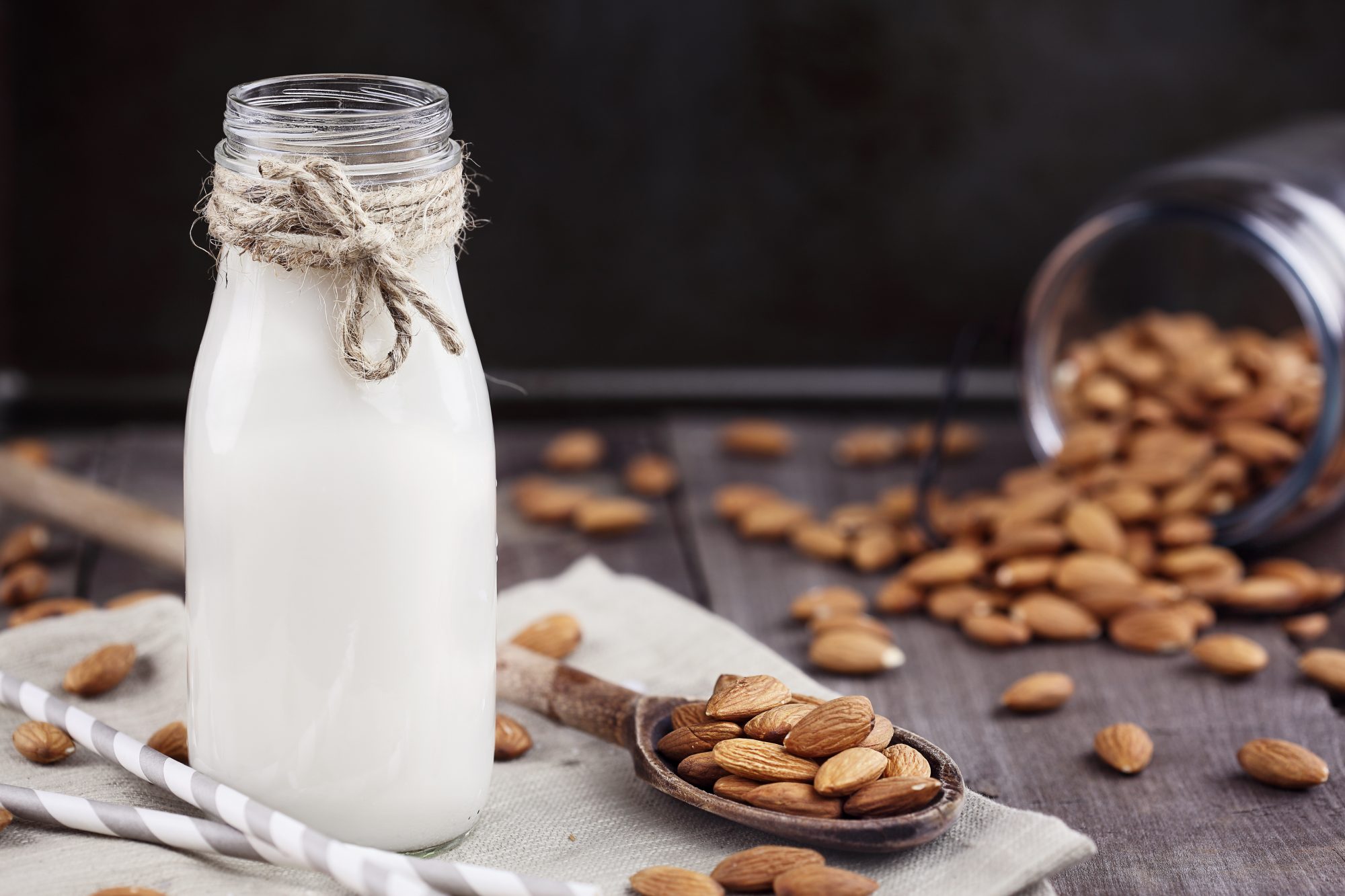 Another cult-favorite, almond milk is a tasty milk alternative that offers many health benefits. Although raw almonds are high in calories and fat, when blended, only a small amount of those remain. One cup of unsweetened almond milk contains only 30 to 50 calories, 1 to 2 grams of carbs, and 28% of the recommended daily intake of calcium. To top it off, almond milk is high in vitamin E and D, and low in sodium, making it one of the healthiest milk alternatives.

The one con of almond milk: It’s often sweetened. To avoid that sneaky sugar, buy plain, organic almond milk at the grocery store. Or better yet, make your own using a blender and strainer, and voilà—unwanted added sugar: Dodged. Delicious and nutritious drink: Made. 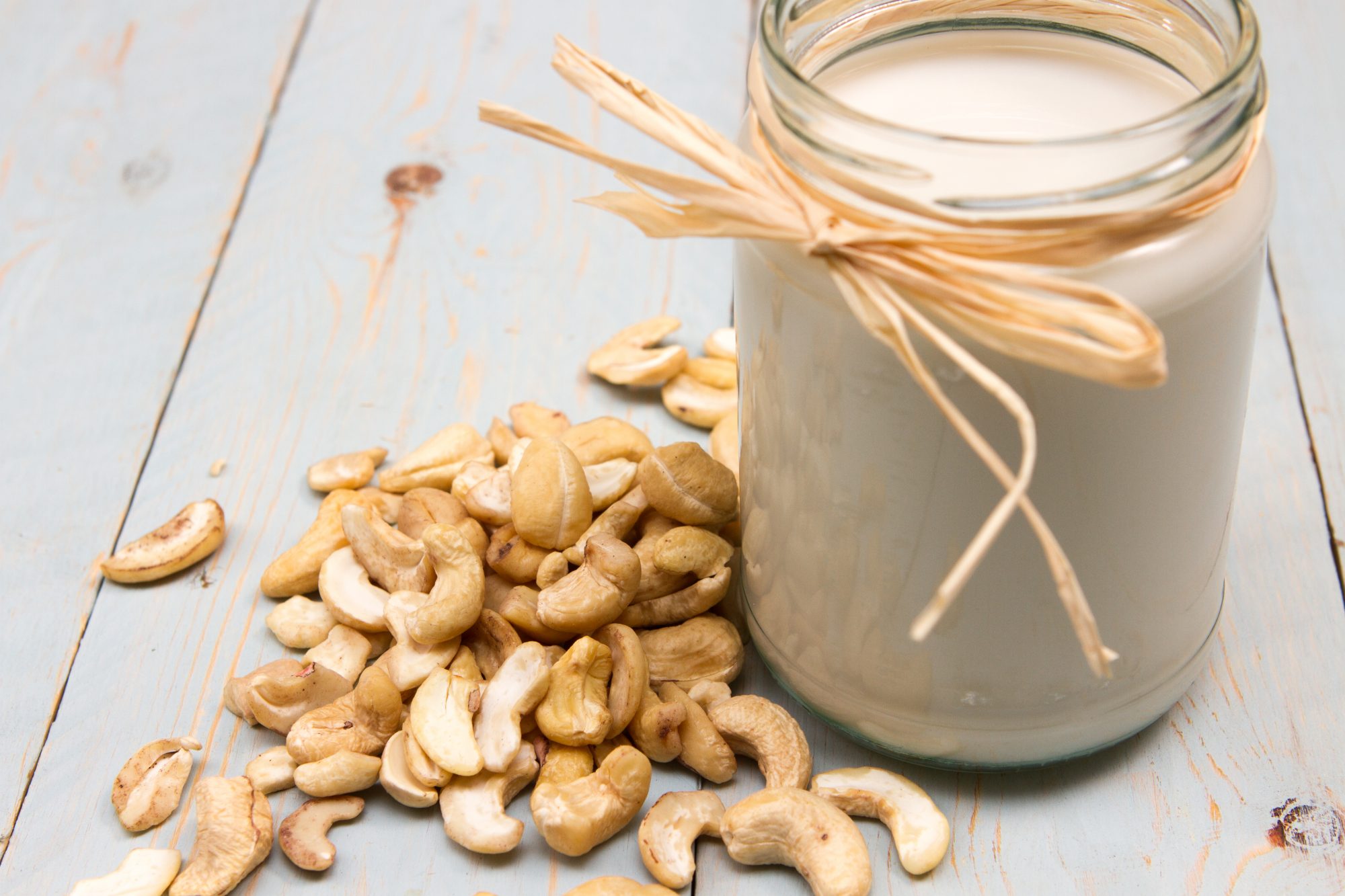 One cup of cashew milk has just 25—we repeat, 25—calories. This makes it one of the lowest calorie milk alternatives, so if you’re counting macros or cals, cashew milk could be your new go-to. It also has no natural sugars, a useful feature for those trying to cut out sugar from their diets. Lots of people avoid dairy because it makes them break out. Cashew milk might have the opposite effect on your complexion—it’s rich in vitamin E, which is great for your skin and protects you from sun damage.

The downside: When the pulp is strained from cashew milk, it loses almost all of its protein, fiber, vitamins, and minerals. So, it’s not the best milk alternative for packing in desired nutrients. But, if you’re looking for a healthier “creamer” for your coffee, cashew milk has got you covered. 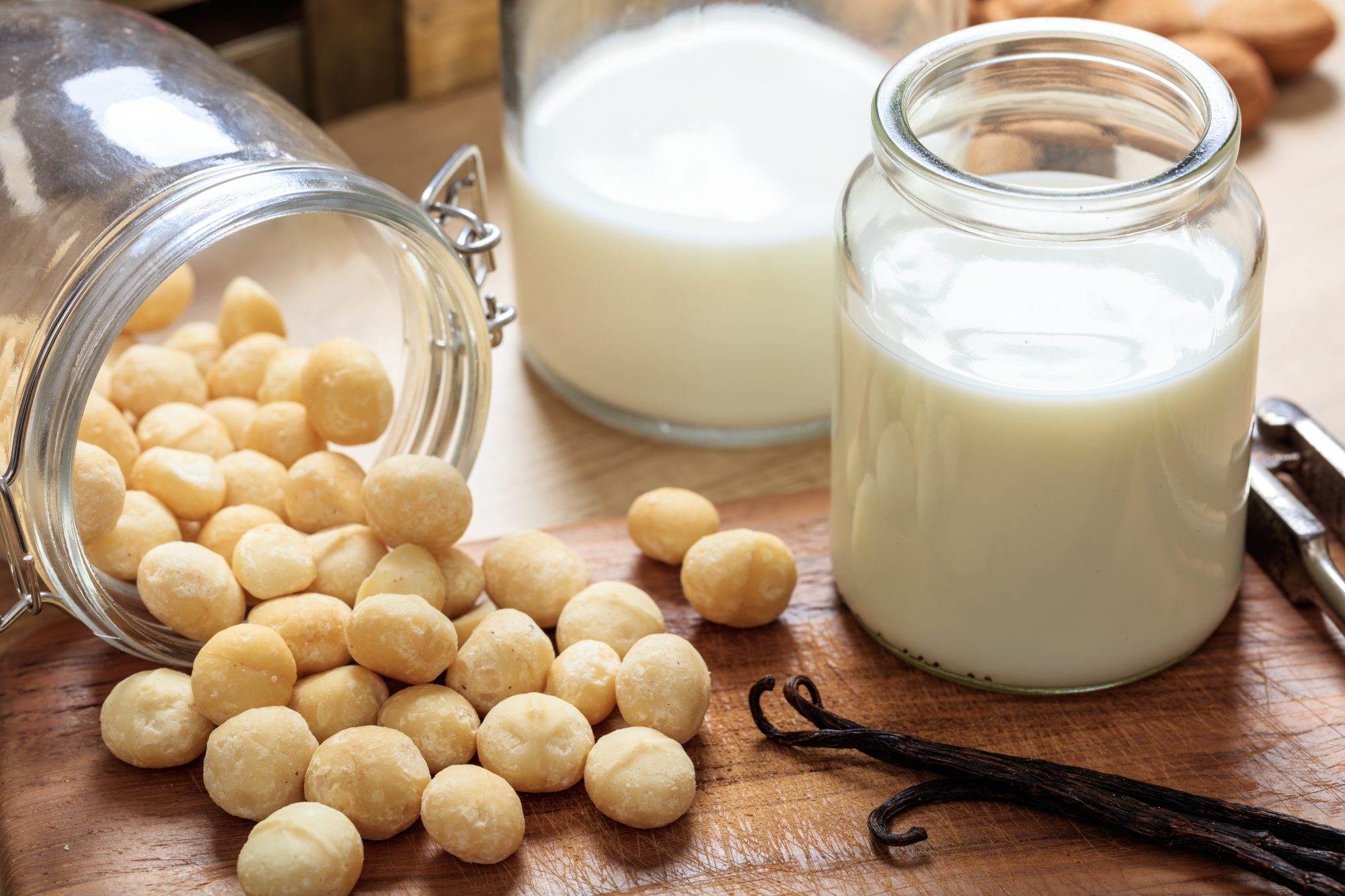 Macadamia milk, or “milkadamia” if you’re in the mood to be punny, is one of the most allergy-friendly milk alternatives. Free of gluten, soy, dairy, and non-GMO, macadamia milk is a safe bet for many people with different dietary restrictions. Macadamias are rich in healthy fatty acids and is low in calories with only 50 per cup. Macadamia milk also has the lowest carb content of any nut milks, making this drink a wonderfully low-carb one. Its rich and creamy texture make macadamia milk a great choice to add to your morning coffee. Yum. 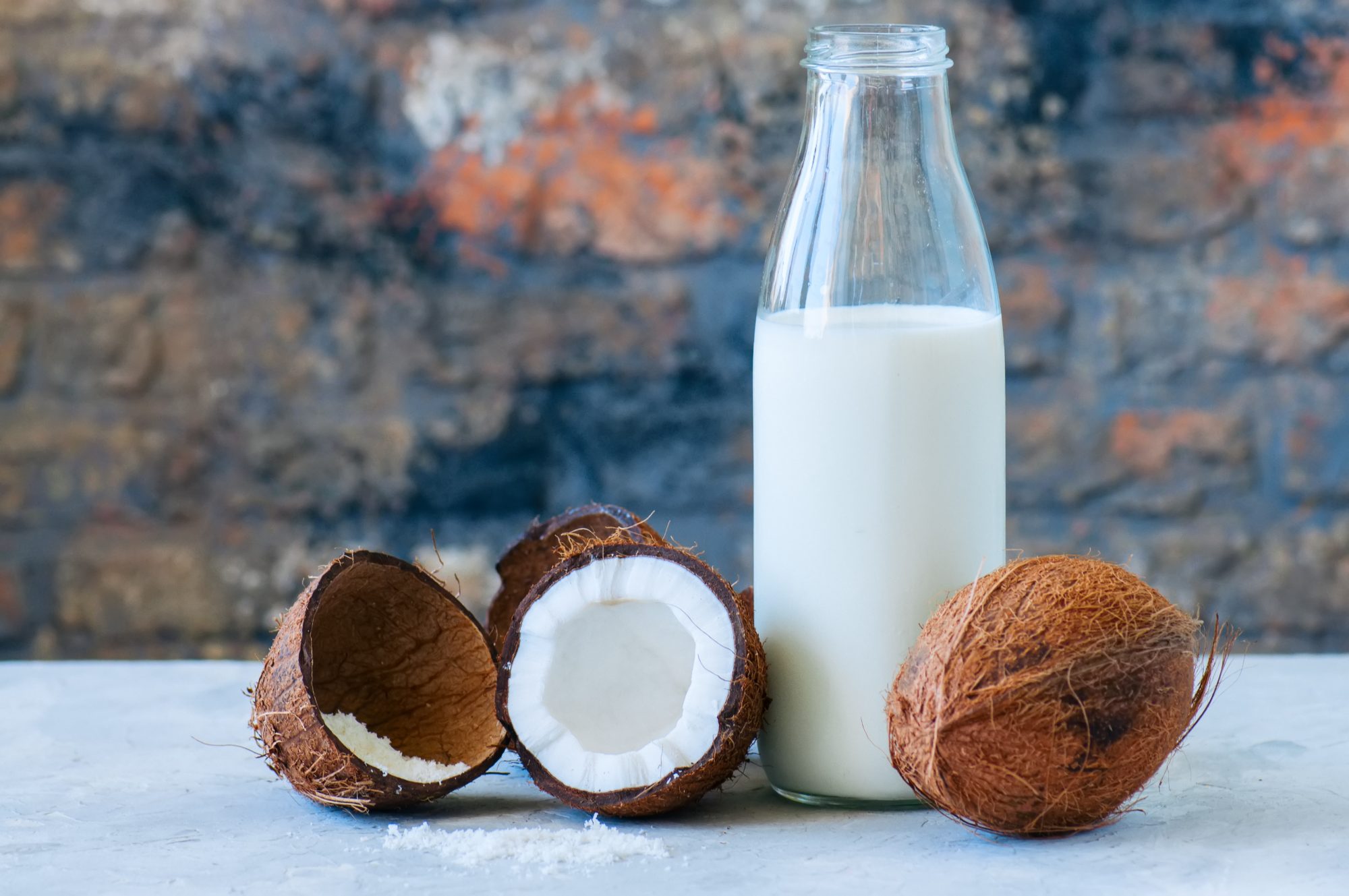 Because of its tropical roots, coconut milk has one of the strongest flavors of plant-based milk alternatives. So, if you’re a sucker for a piña colada, you’ll probably be a sucker for coconut milk, too. Solid coconut flesh is mixed with water to create coconut milk, making it about 50% water, so it’ll keep you hydrated.

Coconut milk is much lower in carbohydrates than nut or grain-based milk alternatives. However, coconut milk contains a whopping 445 calories per cup, meaning it’s not the healthiest milk alternative out there. But, if you’re craving that tropical flavor, just add a dash to your smoothie and enjoy. Life’s too short to not drink the drinks you love. 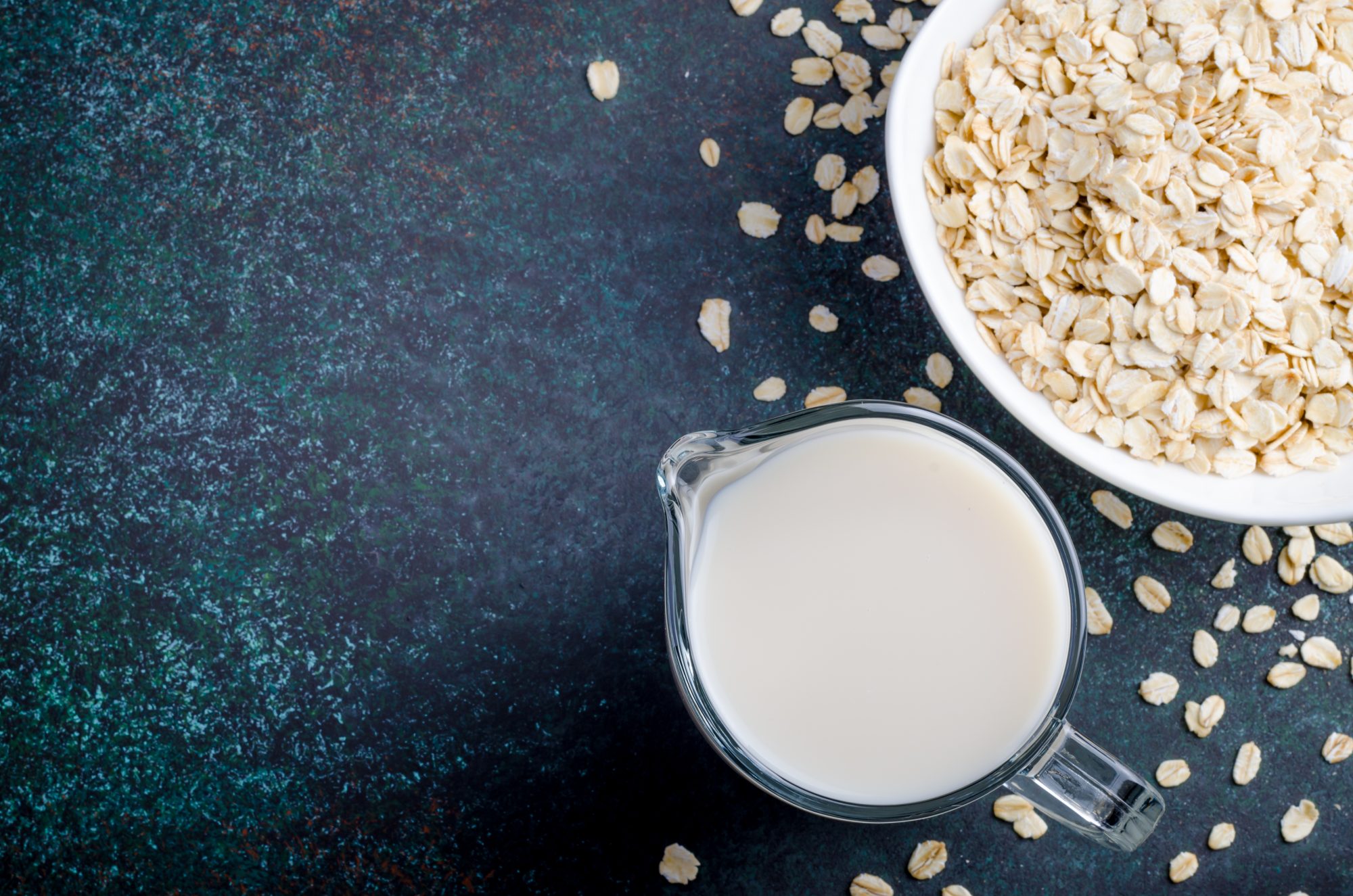 Praised by health bloggers and baristas (oat milk latte anyone?), this is maybe the trendiest milk alternative. Oat milk is a creamy addition to smoothies and coffee, and provides a mild, sweet flavor. Because of its hearty origin, oat milk tends to fill you up quicker than other milk alternatives, making it a great option for pouring over your morning cereal—it can keep your appetite curbed during the work day. Oat milk also contains 3 to 4 grams of protein, giving you an extra boost of energy in the morning.

Although it’s trendy, oat milk has some cons. It has a higher calorie content than most milk alternatives with 140 to 170 calories per cup. Oat milk is also high in carbohydrates with almost double the amount in cow’s milk, which means if you’re trying to cut down on cals and carbs, this isn’t the milk alternative for you. 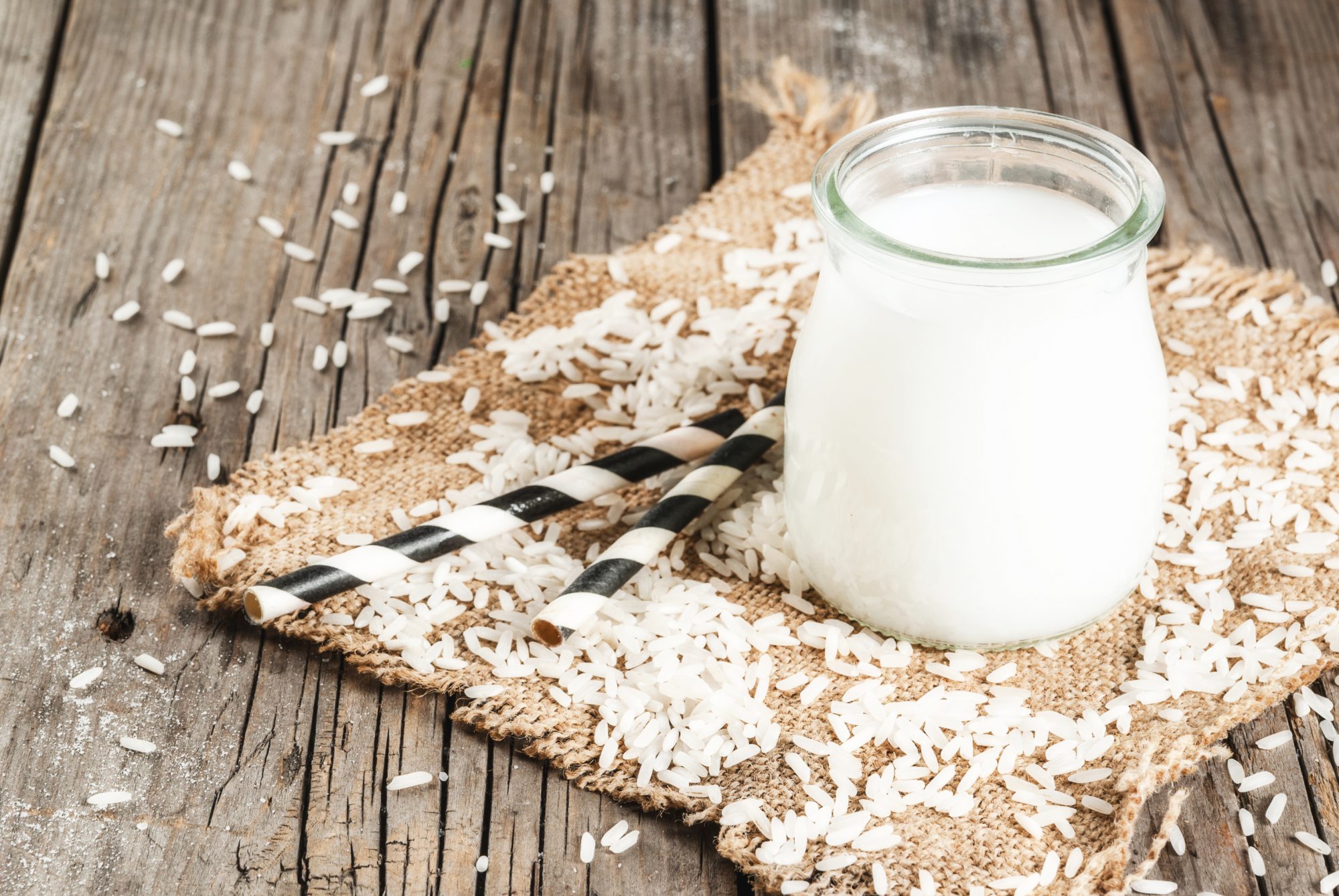 Rice is a trusty go-to for an easy lunch or dinner dish, but it’s quickly becoming popular in the form of milk. Rice milk is the least likely milk alternative to cause an allergy flare up, so it’s a sure thing for those who have intolerances to dairy, gluten, soy, or nuts. One cup contains 130 to 140 calories, and it has a mild and sweet flavor that’s tasty with deserts, in smoothies, or on its own.

However, if you’re trying to stick to a low-carb diet, rice milk is not your friend—it contains the most carbohydrates of any of the milk alternatives. Rice milk also contains high levels of inorganic arsenic, which can cause negative health effects in the long run if consumed too often. 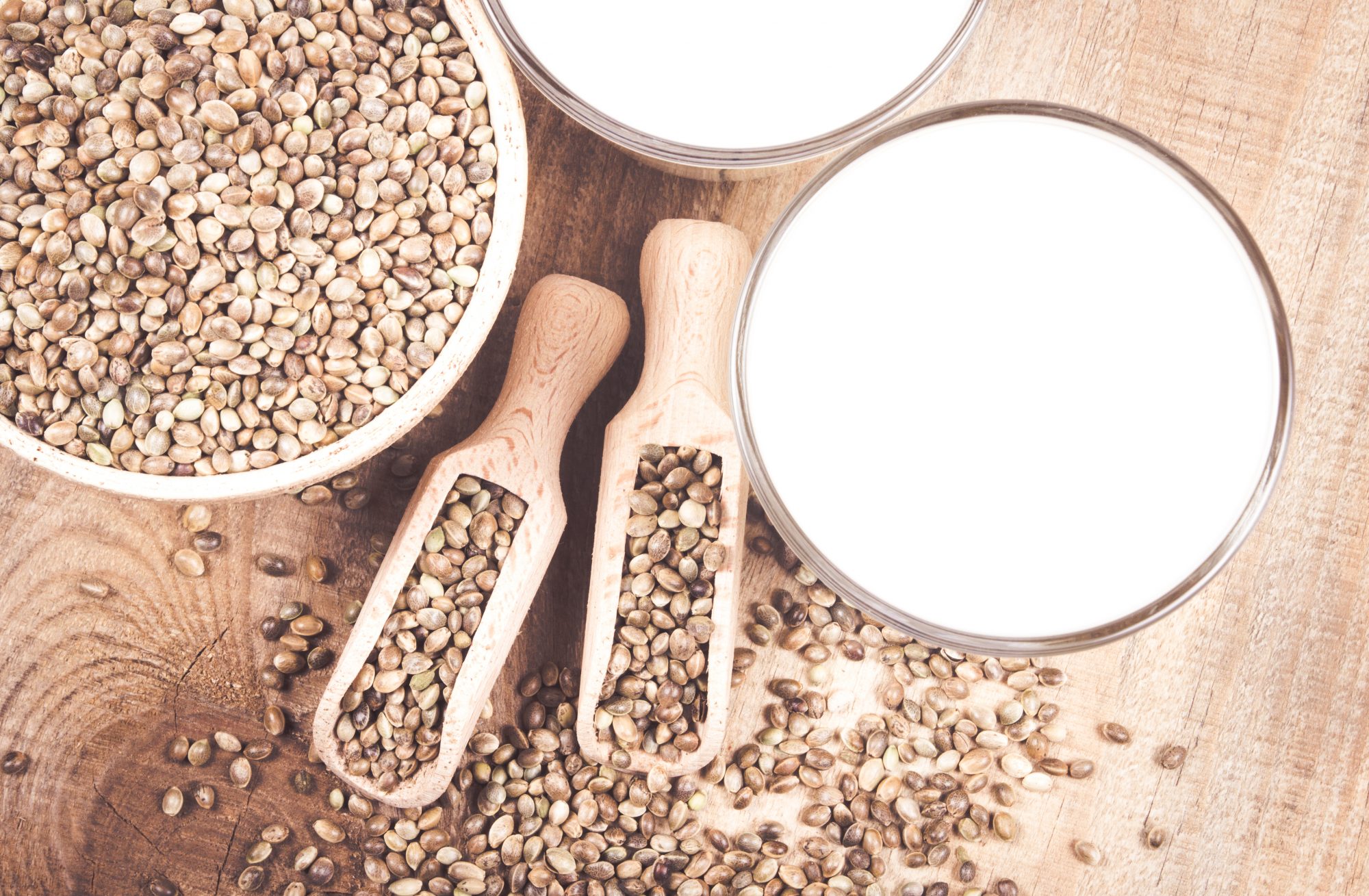 If you’re looking for a milk alternative that will pack in lots of nutrients, hemp milk is calling your name. It’s a great source of magnesium, calcium, vitamin D, omega-3, and omega-6 fatty acids. Hemp milk falls in the middle of the calorie contents of milk alternatives with 60 to 80 calories per cup. It also contains 2 to 3 grams of protein and 0 to 1 grams of carbohydrates. Hemp milk is a great way for vegans or vegetarians to incorporate high quality protein and amino acids into their diet—so animal lovers: Stock up!

Fun fact: Hemp comes from the same plant that produces marijuana—but no, hemp milk will not get you high. (Hemp seeds don’t contain the chemical that’s responsible for marijuana’s mind-altering effects.) One thing to be aware of: The nutty flavor of hemp milk is much stronger than other plant-based milk alternatives, so find out if it suits your taste before buying in bulk. 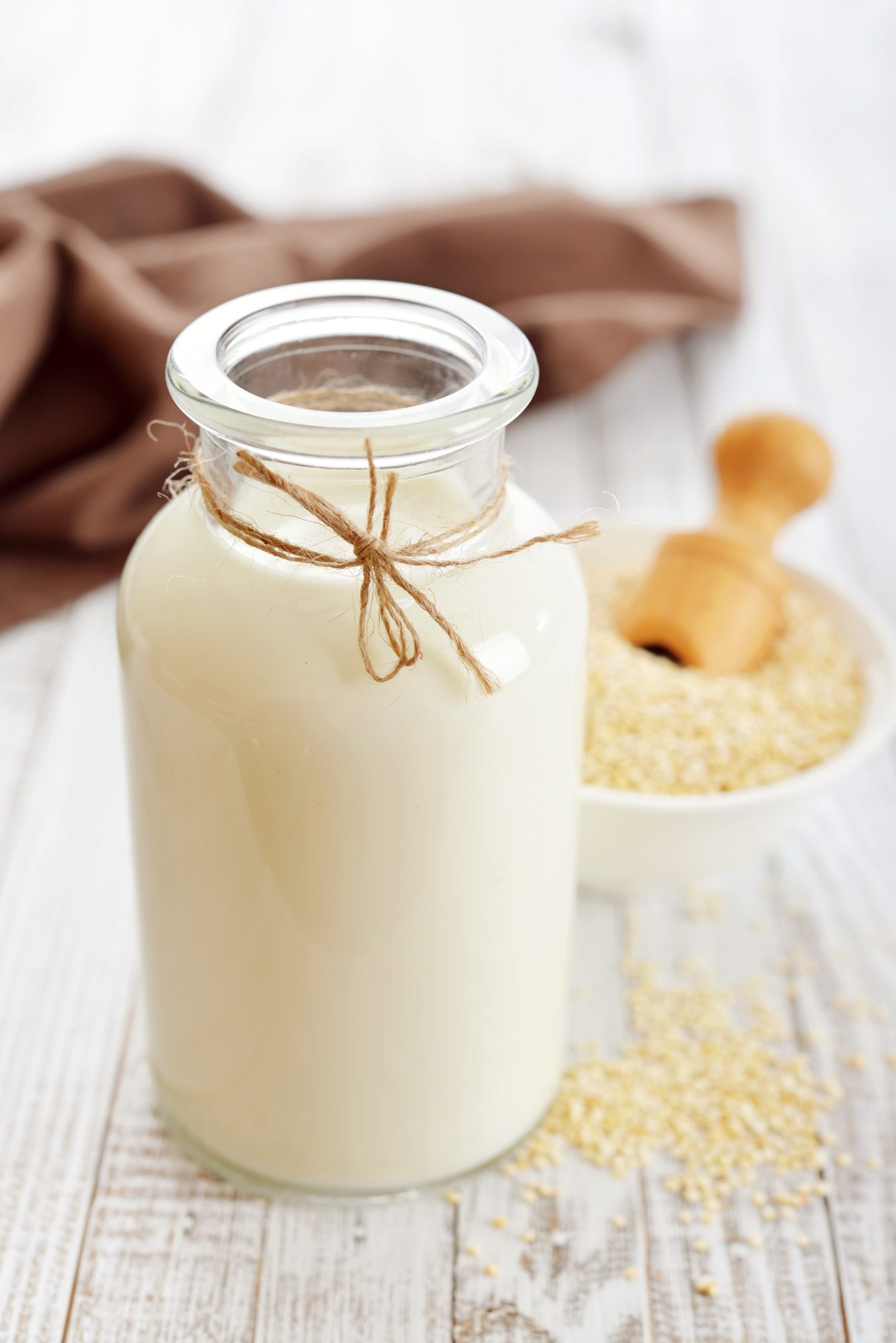 Quinoa has flooded our Instagram feeds, being dubbed a “superfood” for a few years now. And for good reason—quinoa is gluten-free, rich in protein, and delicious. But quinoa milk is a new phenomenon that’s steadily gaining a fanbase. One cup of quinoa milk contains just 70 calories, 12 grams of carbohydrates, 2 grams of protein, and 1 gram of fat. You can taste a light quinoa flavor, so it would be great with steel cut oats or cereal. Since it’s relatively new to the market, quinoa milk can be harder to find and a lot pricier than other milk alternatives. But if you’re lucky enough to get your hands on it, it’s probably worth it.

Now, go forth to the grocery store and pick out the best milk alternative for you.