Miley Cyrus just opened up about coming out as pansexual, and we’ve never adored her more

Miley Cyrus, who has pretty much always been outspoken about her beliefs, just opened up about her sexuality in a really personal way. A way that is important and feels intimate and also educational.

But first, before we get into that, I have a confession: I sometimes feel too old for Miley Cyrus. BUT I FREAKING LOVE HER. By too old, I mean I was an adult when she was Hannah Montana.

But then, when I was even older, Miley released a music video in which she had the raddest short platinum haircut and wore white platform shoes and had bad ass friends who ate money sandwiches and I was like whaaaaat??? I was paying attention.

And started the Happy Hippy Foundation that raises funds and awareness to support homeless youth, LGBTQ youth and other vulnerable populations, and I was like, THIS POPSTAR IS MAKING A DIFFERENCE.

And then she went on The Voice as a judge, wearing the kookiest, most colorful outfits and every time she shows up I love her more. She’s not Madonna, she’s not Britney, she’s not Gaga, she’s a true Original.

She recently spoke with Variety about everything from the presidential race to her time as a Disney star, to her sexuality, and she is the bomb.

Of her wacky outfits for The Voice, she says, “I think it makes the contestants feel safer. When I turn around, people laugh and feel lighthearted. I think they get to see that side of me.” 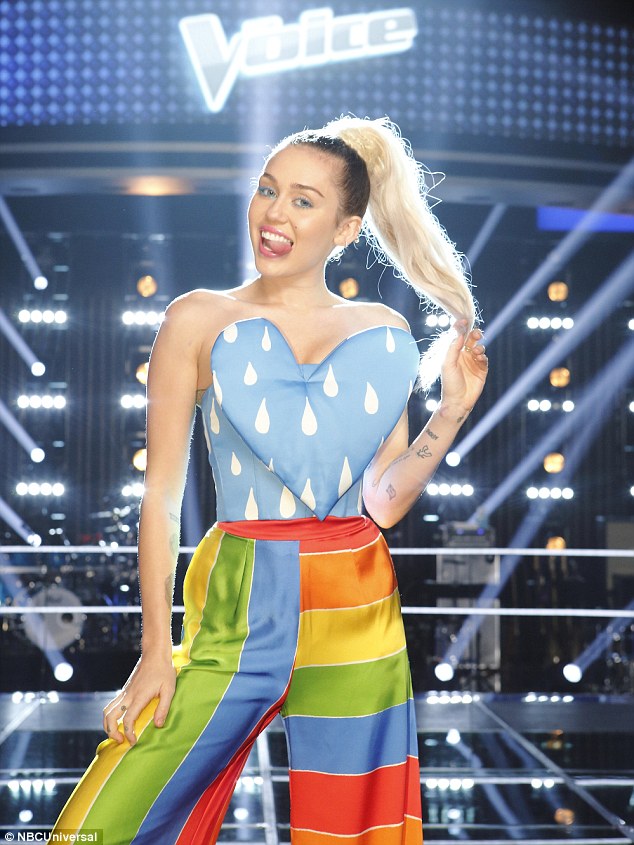 She explains that the decision to do The Voice was to help her activism.

“I am only doing The Voice because that helps Happy Hippie.” Miley is dedicating herself to using her celebrity to help disenfranchised youth. SHE ROCKS.

She says her activism came from a place of feeling insignificant, like her persona and career moves weren’t serving anyone.

"I think I just felt so stupid. I felt like what I was doing didn’t have value, because being a pop star was really silly when people are homeless and hungry."

She adds, “It was making me feel like I was living a dumb life — like I should just pick another job. I didn’t understand my power at that point. People listen because of who I am, so instead of being embarrassed, I should say: ‘Fuck yeah, I got the microphone.’”

And then she gets into her own sexuality, saying she never it or her own gender. Her first relationship was with a female, and she is still dating Liam Hemsworth, but bisexual feels too limiting for her. She spent some time at the LGBTQ Center in Los Angeles.

"I saw one human in particular who didn’t identify as male or female. Looking at them, they were both: beautiful and sexy and tough but vulnerable and feminine but masculine. And I related to that person more than I related to anyone in my life... I think that was the first gender-neutral person I’d ever met. Once I understood my gender more, which was unassigned, then I understood my sexuality more. I was like, “Oh — that’s why I don’t feel straight and I don’t feel gay. It’s because I’m not."

Of the way the public views her, like some sort of wild, partying It Girl, she says she’s settled down to become quite the opposite. “Literally all I do is I’m obsessed with yoga, I love hiking, and I’m reading constantly. My life is so positive. From the outside, people think I’m partying with rappers. That was back in my prime,” the singer and activist says.

Hey, nothing wrong with someone who’s been through a lot, experienced many pressures, skipped adolescence for a very public career and unforgiving scrutiny feeling settled, more mature, self-evolved and self-reflective. That’s rad, actually.

Of her potential influence as she’s been able to shape it, she says,

"On The Voice, this young girl started crying when she left, because I’m the reason she came out. My mom started crying. She was like, 'I’m so sorry about the way I was when you were that age and coming out.' She never understood me until she saw that girl who couldn’t be herself. It was very cool."

Well, Miley, you can also say you’ve inspired this way-older-than-you totally not pansexual or gender neutral or even gender fluid person to be more daring and confident in expressing her individuality. We are way into everyone accepting ourselves and each other for who we are. You’re an excellent role model, Miley Cyrus.