Meena Harris knows a thing or two about ambition. At 35, the Harvard-educated lawyer is the founder and CEO of Phenomenal, the intersectional feminist lifestyle brand; a former senior advisor to her aunt, Kamala Harris, and a vocal member of the vice-presidential candidate’s campaign; the author of two children’s books, the bestselling Kamala and Maya’s Big Idea and the upcoming and (fittingly titled) Ambitious Girl; and the mother of two young daughters with husband Nikolas Ajagu. Clearly, her drive has gotten her far, but it’s also made her fully aware of the double standard placed on women for being “too” successful. It’s a sexist criticism she’s faced herself but has also seen applied to her aunt, who was memorably labeled “too ambitious” in a CNBC story back in July.

“It was amplified by the media,” recalls Harris, speaking to HelloGiggles in October. “Society decided that was something worth paying attention to or that it was newsworthy or something that we should take seriously, instead of saying, ‘That’s a ridiculous thing to say.’ Instead, it was like, ‘Oh, so-and-so has said this, is that true?'”

“I was taught to believe that ambition was a good thing—it meant purpose, it meant determination, it meant pursuing your dreams. It was nothing but positive,” she continues.

But it’s something that, by society, women are encouraged to hide or play down or diminish, because they’re told that being ambitious means that you’re sharp-elbowed or that you’re power-hungry or whatever those bullshit critiques are that we just do not make of men.

As Harris knows all too well, those societal expectations start young—which is why she wrote Ambitious Girl (out Jan. 19 and available for pre-order now). The book, she explains, is all about encouraging kids (and their parents) to “reclaim” the word and giving them “the confidence that they can be who they want to be and that they can pursue their ambitions” no matter their gender. It’s how Harris is trying to raise her daughters and how she was raised herself by a family that included several female lawyers, professors, activists, and, of course, politicians.

Growing up, she recalls, wanting success “was never framed to me as something that was negative or like you’re power-hungry or you’re a little too ambitious, stay in your place. Instead, I was encouraged to laugh loudly, be myself, and claim my space in the world proudly.”

It wasn’t until Harris got older and entered the workforce that she discovered that not everyone shared that same support for women with big goals and ideas. “Society—because of sexism and not being able to deal with strong, powerful women in charge—has been structured to hold women back and oppress us,” Harris says bluntly, adding that we’ve seen that attitude manifest in full force from “the 2016 election continuing through this current presidential election.”

But while that may, unfortunately, be the case, it doesn’t mean those structures aren’t able to be dismantled. That process starts by reminding ourselves that we don’t have to go by anyone’s rules for success but our own. “There’s this internalized misogyny, internalized getting played by the patriarchy, and that’s why I say there’s unlearning we as women have to do because that’s what we are taught,” says Harris. “That’s why I wanted to put this in a kid’s book, because I want to make sure that girls are not taught this, or that we can undo some of that, because we know that a lot of girls are taught this.”

With Ambitious Girl, Harris aimed not only to provide readers with the language to “name and claim” their dreams and goals, as she says, but with the imagery, too, to encourage their aspirations. The book’s cover features a brown-skinned, curly-haired girl with a look of pure joy on her face, a purposeful choice by Harris and illustrator Marissa Valdez to bring much-needed representation into the children’s book world. 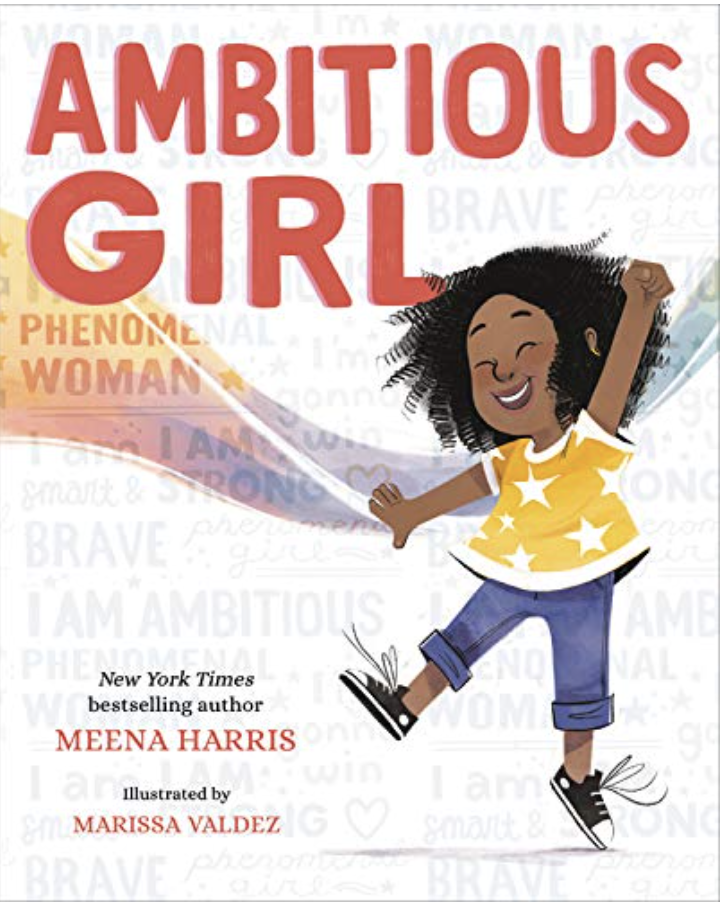 “It is based on my personal identity and experience and thinking about reading to my Black daughters and wanting them to see characters on the pages of their books that look like them and speak to them in a real way,” explains Harris. “I want Black girls to not only be represented, but I want them to be leaders, I want them to be the main characters.”

It’s just as important for white people, white boys, other non-Black, non-female people to see that. Because they also need to understand that that is possible and that Black women, for example, can be leaders and they should aspire to their leadership and respect them and follow their leadership.

Those concepts—that a) you can’t be what you can’t see, and b) representation benefits everyone—are key to the mission of Phenomenal, which Harris founded in 2017. Since its launch, the brand has done everything from selling those ubiquitous (and celebrity-loved) “Phenomenal Woman” shirts in support of the Black Lives Matter movement to raising awareness around farm workers’ conditions during the pandemic. For Harris and her team, it’s all about using their platform to amplify and support a variety of voices.

“In this Trump era, every day there’s something new in terms of some community under attack or some urgent issue we want to encourage folks to mobilize or speak out around,” she explains. At its core, Harris adds, Phenomenal is about “doing the work of making the world better and more equal but doing it in a way that ultimately is about celebrating and uplifting [underrepresented] communities.”

Balancing her work with the company alongside her many other roles is no easy feat (“I don’t always succeed in self-care,” Harris admits), especially with the presidential election just a few weeks away. When she’s not recording supportive videos for the Biden-Harris campaign or emceeing star-studded tribute events for Ruth Bader Ginsburg, she’s tweeting sharp, effective, and often hilarious commentary about the presidential race (seriously, go back and check out her live-tweets of the last debate). However, the constant hustle takes a toll; Harris says there have been plenty of times when she’s felt stretched too thin or teetering on the edge of burnout, but she’s pushed through because of the importance of the election.

“The challenge with politics, and especially presidential campaigns, is that often you just can’t wait,” she says. “We have three weeks left until the election, and listen, the people that do this work are sort of maniacs anyway, but in part it’s because you just can’t afford to do that.”

For now, she’s making do by checking in with herself when she’s overwhelmed, taking breaks when possible, and “ruthlessly prioritizing” her calendar to enable the occasional me-time. Of course, she’s holding out hope that she (and the rest of us) will be able to take a much-needed rest after November 3rd, but don’t expect her to slow down for long—when it comes to the issues Harris cares about, there’s still plenty of work to be done. “In terms of the journey, fighting for equality, we’re still not where we need to be,” she says.

“But,” she adds, “I’m gonna do whatever I can to know that I tried to change that.”