If you were to ask my 16-year-old self which fictional character she most identified with, I know, without a doubt, she would say Cher Horowitz. Like the delightful though somewhat dippy main character in the immortal 1995 teen classic Clueless, I was obsessed with fashion, pop culture, and getting my way. I loved Cher’s determination, her sweetness, her witty quips, and her philosophy on clothing and boys. I watched the movie constantly, and read Emma by Jane Austen solely because of Clueless‘s connection to it. I even had the matching yellow plaid blazer and skirt ensemble. For me, that movie was perfection.

In recent years, Clueless has come back into popularity—as if it had ever even left. But now there is merch from the movie (including a bikini collection) appearing in stores like Hot Topic and Target, as well as an off-Broadway musical production of the iconic movie. All this inspired me to rewatch the beloved movie of my teen years, and while I did still enjoy some aspects of Clueless, one thing left me totally bugging: Cher’s disordered eating behavior.

Instead of being taken seriously, her disordered behavior and thoughts—calling herself a heifer when she is very thin, feeling like “ralphing”(throwing up) after drinking two mocha-chinos, listing off details of everything she ate—were treated as jokes, as part of the “Valley Girl stereotype” that the movie was satirizing.

Rewatching Clueless as an adult eating disorder survivor led me to this question: Why are eating disorders—which have the highest mortality rate among mental illnesses—continuously mocked in movies and TV shows?

The “rich white teenager with an eating disorder” trope in Clueless was frequently seen in teen satires from the late ’80s to the early ’00s, from Heathers to Mean Girls—but it continues widely today. Modern Family regularly jokes about eating disorders through character Haley Dunphy, Midge obsessively measures herself in The Marvelous Mrs. Maisel, The Christmas Story Live featured an unneeded “joke” about anorexia, and Netflix’s dark teen comedy Insatiable has been renewed for a second season despite major backlash surrounding the show’s fatphobia and glamorization of disordered eating behaviors

Fans and cast members have defended Instatiable, calling it a satire that people take “way too seriously.” In an interview with BuzzFeed News, show creator Lauren Gussis claimed that she was using satire to address “a lot of really sensitive issues…in a way that isn’t necessarily the way that you ‘should’ talk about them.” When asked about the number of rape and eating disorder jokes in the series, Gussis says, “It’s functioning exactly the way that I said in terms of satire: It’s airing out that dark thing that we’re all thinking that nobody’s going to say.”

To me, this sounds like someone saying “just kidding” after an appalling statement, but putting that aside, Gussis’s perspective is also not very helpful. Clueless‘s Cher and Instaible‘s Patty both show signs of or are suffering from a mental illness. But the viewer is supposed to laugh at them for participating in “superficial” diet culture and being too conscious of their weight. It’s supposed to be funny when Cher tells her friend Dionne to cut her food into little pieces to lose weight—but that’s classic eating disorder behavior, not an attention-seeking habit like these stories would lead you to believe. 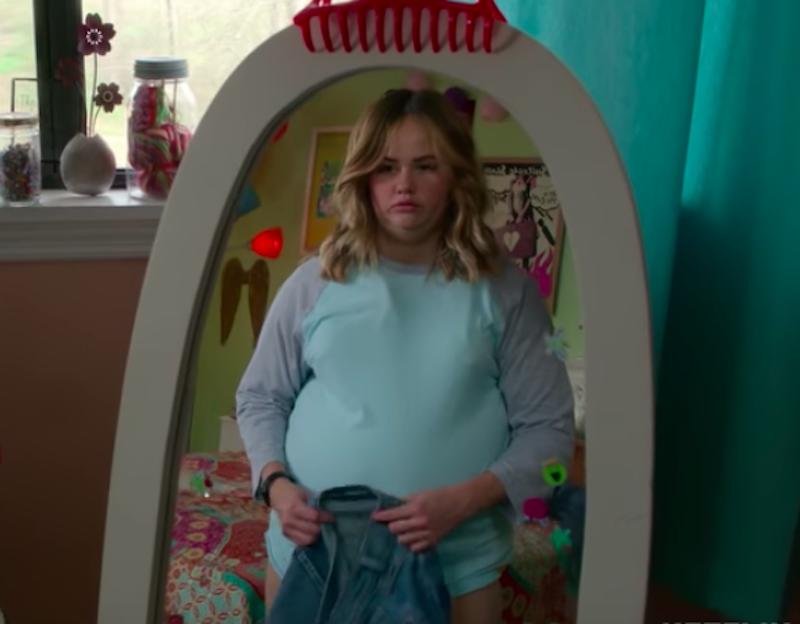 According to the National Eating Disorder Association (NEDA), eating disorders occur for a variety of reasons stemming from biological, psychological, and sociocultural factors. Eating disorders aren’t moral failures or things that you can “grow out of.” They have lasting psychological and physical effects, including hair loss, osteoporosis, kidney failure, heart failure, suicidal ideation and attempts, loss of menstruation, infertility, tooth decay, inflammation and rupture of the esophagus, depression, anxiety, and death.

Yet we often don’t see any of this struggle on the screen. Instead, we just watch morally questionable characters count calories and whine about wanting to be skinny.

According to Emily Slager, LMHC, who is Program Director for Walden Behavioral Care in the Waltham, Massachusetts clinic, this characterization sends a deadly message to those watching. “It [says] that eating disorders aren’t serious but part of a package of other negative personality traits, or are associated only with certain types of people,” she says. “Unfortunately, most of how we’re seeing eating disorders being portrayed in popular media today only perpetuates the longstanding stereotypes.”

The problem with using eating disorder behavior in satire is that, when you’re mocking an issue that is widely misunderstood even by health professionals, most people won’t get the “joke.” They aren’t being given enough context to get it.

Satire uses humor to criticize society’s ills. While toxic diet culture is a serious problem in our society, mocking the people who have eating disorders is not the solution.

If anything, these messages make the problem worse. “Highlighting eating disorders in these harmful ways,” says Slager, “only causes more harm and more confusion. If the only education people get is from sources like Mean Girls and Insatiable, they are getting seriously inaccurate representations of those living with eating disorders and the illnesses themselves.” If these images are teenagers’ only frames of reference for what disordered eating looks like, then that’s how they’ll think of eating disorders forever—superficial and funny. If they engage in similar “dieting” behaviors and develop their own eating disorders, they won’t consider getting help for an issue they’ve only seen portrayed in a humorous light.

Clueless will always have a special place in my heart, but it’s time that new stories—especially ones targeted at young adults—stop treating eating disorders as punchlines.

And white, wealthy, straight, cisgender teenage girls are not the only people who battle eating disorders. Any person can get an eating disorder. But people in marginalized communities and people who don’t fit the stereotype of an eating disorder patient—people of color, queer people, people living in poverty, people who aren’t thin, and men—rarely receive the help they need.

According to NEDA, Black teenagers are 50% more likely than white teenagers to exhibit bulimic behavior, such as binging and purging. Research has found that, beginning as early as 12 years old, gay, lesbian, and bisexual teens may be at a higher risk of binge-eating and purging than their heterosexual peers. Black and Latinx LGBT folks have at least as high a prevalence of eating disorders as white LGBT folks. These groups are at a higher risk, but they struggle to get treatment.

“Often, individuals we treat from marginalized groups have lived with their eating disorder longer, and as a result, may be sicker when they enter treatment,” says Slager “This can be for a variety of reasons including real or perceived lack of eating disorder treatment options, lack of resources and/or a lack of recognition/awareness by loved ones and professionals. Marginalized populations aren’t at stereotypical eating disorder risk.”

This isn’t just an issue of “political correctness” in media—real lives are at risk because of this stigma and stereotype.

Fortunately, there is hope. Slager says that more people of diverse backgrounds have been seeking treatment in recent years, and the increases are measurable and observable. “We are seeing a much higher percentage of people [come in for help] not falling within the stereotypical eating disorder mold than when I first started working here 12 years ago. I am seeing much more gender diversity—males, transgender and non-binary individuals.” Slanger says that she has seen patients as young as 5 and as old as 70.

This is progress. But we need more of it, and that can start by treating eating disorders as a serious topic.

If you or someone you know is struggling with an eating disorder, please visit the National Eating Disorder Association (NEDA)this link opens in a new tab for more information and support or text “NEDA” to 741-741.