If you’re a big Friends fan, chances are that quotes from the show are permanently etched into your brain. When someone says that something’s a “moot point,” you hear Joey say “moo point,” and kind of follow his logic. Every time someone says “Oh my god,” you hear it in Janice’s slow, nasal-y voice. When you order two pizzas, you call it the Joey Special. But the question is: Do the Friends actors know their Friends trivia as well as the fans do? Graham Norton decided to put Matthew Perry’s memory to the test. 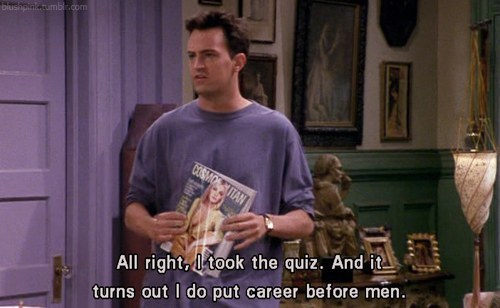 You might remember a little episode called “The One With the Embryos,” AKA “The One With All the Trivia.” Monica and Rachel go head to head against Chandler and Joey in a friendly (ish) game of trivia, where the girls’ apartment is on the line. It’s hands down one of the show’s most loved, most quoted and most gifed episodes.

That episode taught us things like Monica’s biggest pet peeve (animals dressed as humans) and her late grandmother’s name (Althea—nice shooting!). Of course Friends fans know the answers to all the questions, but do the actors? Even though they were the ones who originally delivered the lines, they probably don’t watch and re-watch (and re-watch) the episodes as often as we do.

On The Graham Norton Show, the host asked Matthew the Chandler-specific questions from that episode. And the actor got almost every answer right! In the immortal words of Chandler playing a game against himself, “Chandler Bing 7, Chandler Bing 0.”

Play along and see if you know the answers:

If there was ever any doubt that Matthew Perry was the perfect actor to play Chandler, listen to this story that seals the deal: Matthew was originally unavailable for Friends, but knew actors who were auditioning for the role of Chandler. He understood the character so well, he would coach them on how to be more like Chandler. “I finally said, ‘Let me just do this for you. Just imitate what I’m doing,’” he said. “And some of them got very far, and almost got the job.”

Fortunately the pilot he was working on didn’t get picked up, Matthew won the role of Chandler, and the rest is history!