There are some fan theories in the past year that have made us say, “Hmmmm, maybe.” There are some that have been hilarious, and others that have been incredibly dark. And there are still others that make us wonder if we’re reading an art installation or some sort of poetry, because they’re just that insane. The “Bigger Luke” theory, which posits that there are actually two Luke Skywalkers in Star Wars, falls into the latter category for sure.

The theory revolves around the existence of two Lukes — “Bigger Luke” and “Luke Prime” — that appear throughout the films. Bigger Luke is the “slightly larger manifestation” of Luke, which can be judged against Han Solo’s height, and that NHPs are to be discouraged. NHP means “No Han Pics” because obviously.

The theory’s page also has diagrams to show the “size discrepancy” between Bigger Luke and Luke Prime with Han Solo as the middle man. There’s apparently a size difference in these photos, for example: 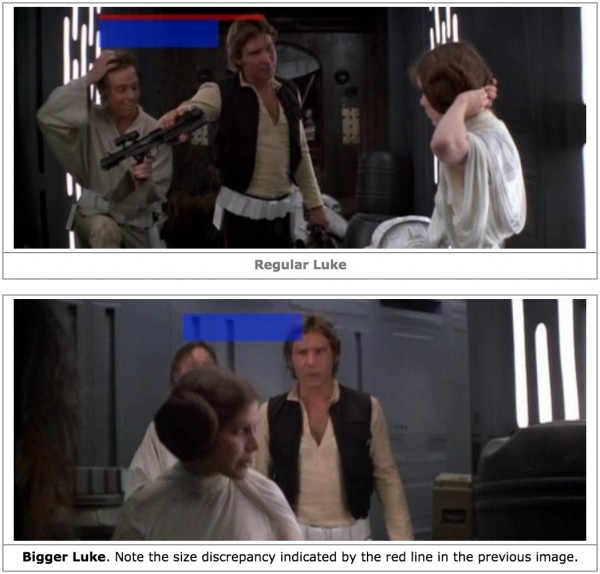 Yes, clearly the first is Luke Prime and the second is Bigger Luke. It’s not because Luke is kind of crouching a little bit, or anything logical like that. TWO SEPARATE LUKES.

So you may be asking, “But. . . why??” Apparently, there are several theories as to why there would be two Lukes, because there are always theories attached to theories. Some are within the Star Wars universe — that Luke’s sensitivity to the force is affecting his height, or that Bigger Luke was created by Obi-Wan as an illusion to freak out stormtroopers. Others are out-of-universe, claiming that Bigger Luke is a slightly taller double used when Mark Hamill was recovering from a car accident during the end of filming A New Hope (apparently, hence the line “Aren’t you a little short for a Stormtrooper?”).

So is this a parody? Do we want it to be a parody? Either way, it’s so ridiculous that it’s practically art. And that’s enough of the Internet for today.