The holiday season came to an end, and I realized that, at a certain age, “cuffing season” becomes a whole lot more serious. As in, when you’re in your late 20s and summer fades and Thanksgiving approaches, those playful cuffs turn metallic and sparkly, ready to show off to the ‘rents when you go home for the holidays. October through New Years is often considered engagement season — especially if you’ve newly entered your late twenties. And with this most recent holiday season came the now-ubiquitous pre-matrimonial mainstay: the #Engaged social media announcement.

You know it well: A member of a couple announces their engagement on Instagram with a photo of a sunset proposal featuring the moment of joy and shock. Or tear-stained faces, or intertwined hands, and always, ALWAYS the ring. In some photos, the hand takes up the whole frame, fingers flexing to show off the ring at its most sparkly angle. Pictures of couples embracing while they face the camera, with the ring-wearer’s hand resting gently on the chest of their beloved. Occasionally there’s even a ring nestled amongst other objects of domesticity, like coffee mugs or Scrabble pieces. They are captioned with hashtags like #SheSaidYes and #blessed. All receive hundreds and thousands of “likes” and heart-eye emojis in the comments.

As of this writing, there are 6,740,653 public photos tagged #Engaged on Instagram.

So, say, um, totally hypothetically, that you’re a 28-year-old woman who contentedly lives with her partner of three and a half years – and suddenly, around October, the seemingly endless #Engaged photos of friends, acquaintances, and near strangers start popping up in your feed, fast.

How does one react to the invasion of these weirdly old-school engagement announcements across our social media universe? How are you supposed to feel about the bliss of monogamy sneaking up on you and yelling “SURPRISE!” around every digital corner?

When the trickle of #Engaged photos first started to form a deluge in my feed last year, I realized that I had been deliberately keeping the idea of marriage at arm’s length. I had internally tabled the conversation, ashamed that I, a Strong Independent Woman, maybe did want marriage, or kids, or the whole… thing. I was even embarrassed to bring up my own ambivalent feelings to my friends, because I thought, as progressive women, we were supposed to be “better than” discussing weddings over brunch. Marriage was supposed to be something we were open to, not something we required; an empowering choice, no matter what we decided.

But the social media whiplash caused by marriage announcements made it impossible for me to ignore a sneaking suspicion: I did not feel as nonchalantly as I wished.

The reoccurrence of the photos this holiday season have forced the issue, and I started to actively, intentionally chew on the idea of supposed lifelong commitment as my diamond-free fingers scrolled through my ring-laden social feeds. After many initially tentative, eventually spirited conversations over group texts — and even over the dreaded brunch — marriage discussions stopped scaring me so much. Getting over that embarrassment and apprehension made me hungry for even more opinions about commitment vs. singledom — and it paid off.

After reading the works of writers like Rebecca Traister and Kate Bolick, I came to a more complex understanding of how marriage functions in contemporary society and in my own psychology. In particular, the idea that marriage has become a capstone achievement for educated women resonated with me: that marriage functions as a signifier of success, along with one’s job and material possessions. I found that conflating marriage with achievement is where a lot of the pressure to marry comes from in me — a pressure that I am now able to acknowledge and check, instead of deny and suppress. 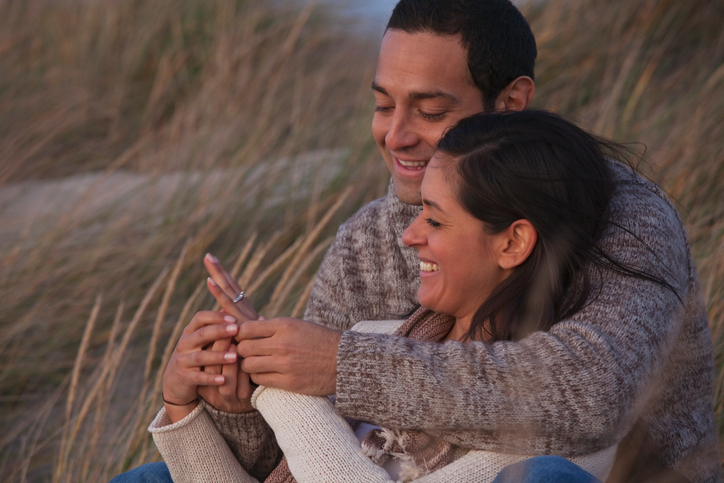 Being inquisitive about marriage has also made me realize that I admire my parents’ marriage of over 30 years, and that a deep partnership — a shared life — is something I do, in fact, want.

In my teens and early 20s, I never wanted to tell my parents that I hoped  to get married. I now realize that was a bulwark against disappointing them (and myself) if I never “found The One.” I always insisted that “it may or may not happen,” which is still true, but it was also an insistence borne from a place of fear, not conviction.

Thinking critically about the #Engaged photos and relationships behind them has allowed me to face that place of scary vulnerability.

One day, this past year, my mom and I sat on the carpet of her home office, petting our dog.

I mustered the courage to ask her, “When dad and you agreed to get married, what were you thinking? Were you just happy? Or was there a part of you that was apprehensive and scared, too?

She shared a wholly unexpected train of thought, letting me in on a more prismatic view of her long marriage. I started to feel calmer, more hopeful — even excited — about the idea of lifelong commitment. That deeper understanding of my parents, their relationship, my family, and my model of partnership was only possible because I let myself be inquisitive rather than fearful.

Now, with a calendar full of friends’ weddings ahead of me, the #Engaged photos aren’t jarring. They make me smile. My “likes” are sincere, not perfunctory. However, an exploration into my own possible marriage – rather than marriage as a concept – comes with its own can of worms to be opened in the next round of conversations I’ll have with my partner about our relationship. Gulp.

I have started to interrogate whether the path my partner and I are currently on is something we genuinely want, or if our expectations for each other are impacted by the choices of our friends and social networks. I know that I love my partner for his goof and ease and so much more, but I wonder if the commitment we make towards each other — expressed with love as we cook and hum — comes from within or without.

Essentially, I don’t want us to get engaged in order to fill a slot in each other’s lives that we’ve decided we want in the abstract.

I want us to choose marriage because we choose each other – not just the institution, the party, the hegemonic lifestyle, or, most saliently for me, the achievement.

Fortunately, all of these questions and considerations are just that: wonderfully terrifying things to ask and discuss, together. And the fact that our friends are puttin’ a ring on it all over the social media universe makes the idea of marriage a bit less unfamiliar and scary, a bit easier to broach in our partnership. Oddly enough, because marriage is broadcast so routinely, the conversations aren’t as loaded as they might have been had we no friends and peers for comparison.

Right now, I’m not sure what our future looks like. But I do know that we had a lot to talk about over warm, cinnamon-y beverages while our friends’ Christmas and New Year’s #Engaged photos rolled in this past holiday season. And I don’t think it’s any coincidence that, over the past month, we’ve been able to have more difficult — but necessary and exciting — conversations about our relationship than ever before.

So cheers to the New Year, because a season of honest reckoning with the role of love and commitment in our lives is a season worth celebrating, to me at least. Heart-eye emojis all around!