Motherhood—and mothers’ voices—should be celebrated every day. But that also means having honest, judgment-free conversations about the complexities of parenting. In our series Millennial Moms, we reveal the beautiful—and daunting—responsibilities of motherhood through the lens of different women’s experiences, from balancing side hustles in order to provide for our kids to dealing with dating apps as young single moms.

At 25 years old, I found out I was expecting my eldest daughter. Despite the fact that it was a surprise pregnancy, my partner and I decided that we wanted to keep the baby. That didn’t mean we weren’t terrified, though. No one in my day-to-day life had kids: not my friends, colleagues, or fellow millennial relatives. One of the questions that tormented me the most through my pregnancy was whether I was actually ready to do this. Could I be a good mother to a child when I still felt like such a kid myself?

I grew up believing that being an “adult” meant being someone with a job, money in the bank, a pension plan, a wardrobe full of muted hues, and maybe the deed to a home in a personal filing cabinet. I likely felt this way because my parents both grew up very poor. To them, financial stability—if not affluence—was undoubtedly one of their greatest hopes for their children.

Somewhere along the way, I internalized the idea that it was financial stability that would make me a real “grown-up.” And once I was a “grown-up,” I could be a good mother.

At the time of my first pregnancy, my partner and I were renting our home, and I didn’t have any savings. Also, my closet was full of eccentric rainbow dresses and sequin pants. I still enjoyed video games, adult cartoons, and Star Wars movies. Despite the fact that I had a job and paid my own bills, I still felt so extremely removed from the idea of “adulthood.” I still believed that if I wasn’t where I thought I “needed to be” financially before having a child, it was because I hadn’t yet nailed adulting and was subsequently ill-equipped to enter motherhood. 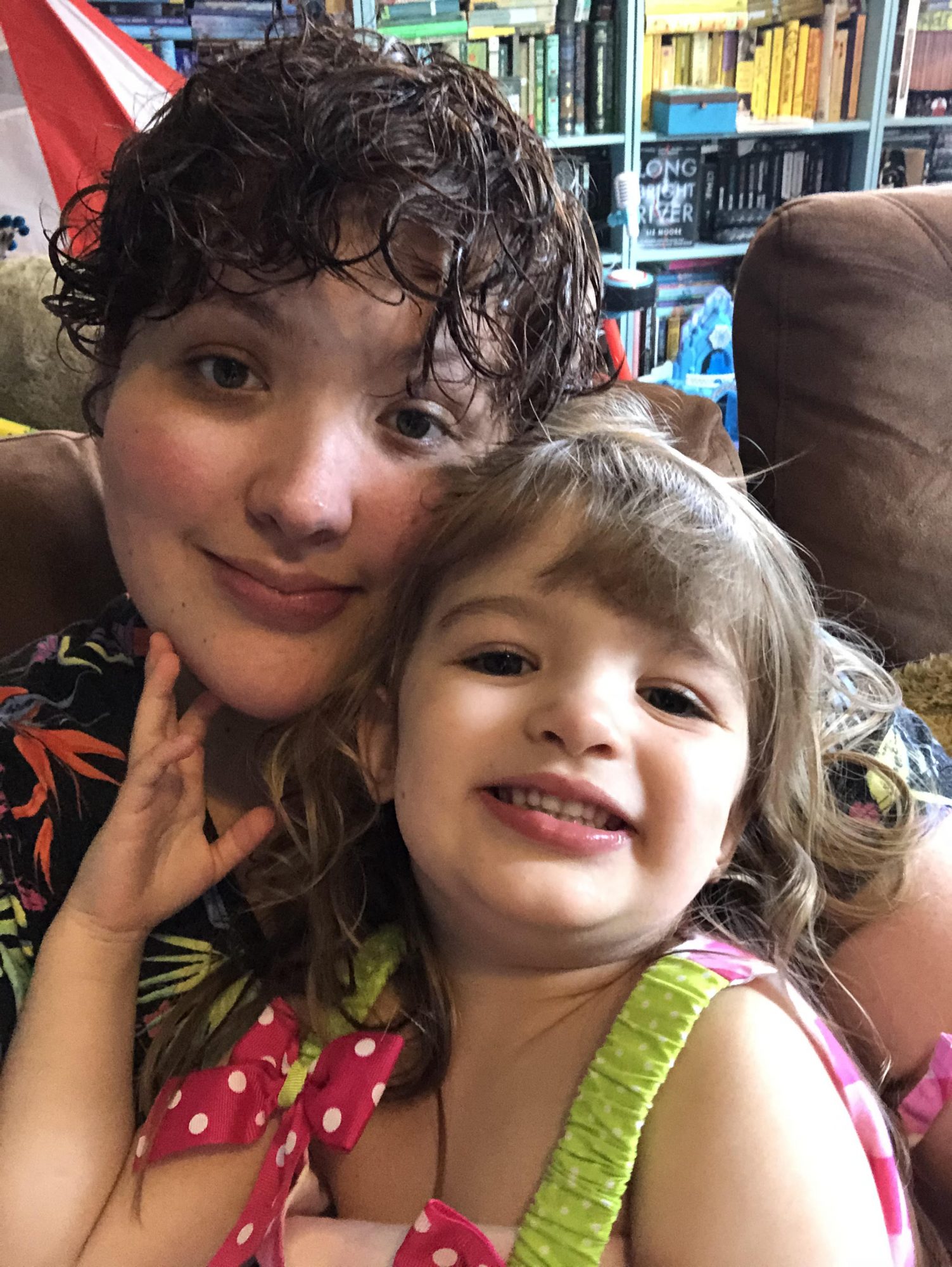 Emotional maturity factored into my concerns as well. I like to think of myself as a caring, sensitive, yet strong person; I’ve been through a lot of loss, but I can pull myself out of hardship. Nonetheless, my battles with social anxiety, childhood trauma (which still surfaces as relatives continue to treat me like a child), and disordered eating have long prevented me from feeling like my most emotionally mature, adult self.

Before my eldest daughter was born, my partner and I decided to move to the U.K. (where he is from) and start our family there. Socialized health care, a lower cost of living, and the possibility for familial support were all at the root of our choice. In retrospect, the decisions we made were thoughtful and mature. Still, I felt clueless. I questioned my skills, my personality, and any potential baggage I carried and endlessly wondered if I could be a suitable parent when I still felt like a kid inside. I was undoubtedly struggling with a hefty dose of maternal imposter syndrome. Three years and two children later, it’s still something that weighs on me at times.

According to Dr. Lara Fielding, a clinical psychologist and author of Mastering Adulthood: Go Beyond Adulting to Become and Emotional Grown-Up, imposter syndrome is common among new mothers and manifests as a doubt in their capabilities. “Despite evidence demonstrating their abilities, people with imposter syndrome remain convinced they’re a fraud,” she tells HelloGiggles. 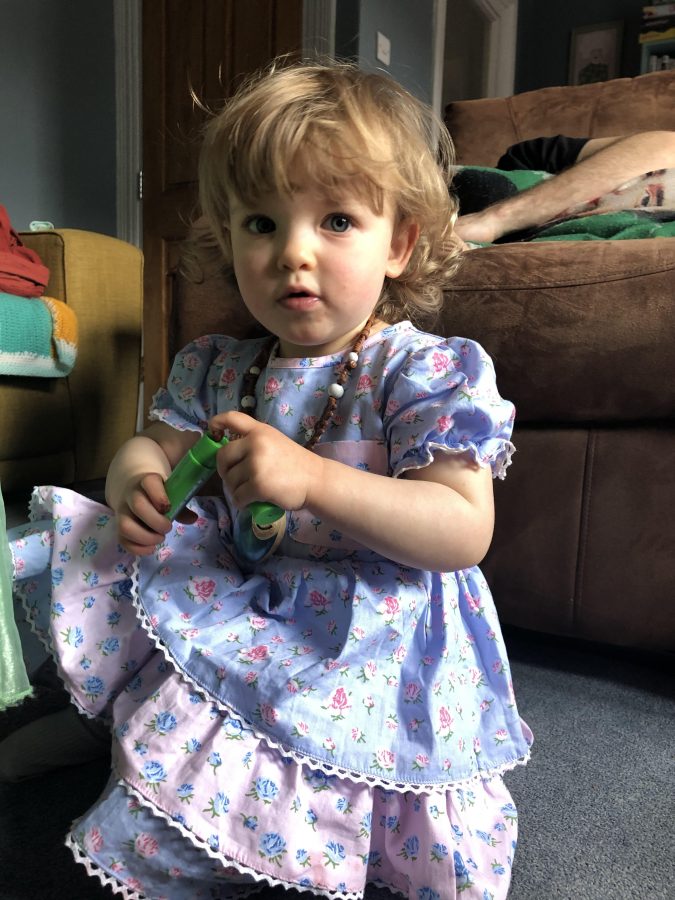 Dr. Fielding says that being an “emotional grown-up” is extremely valuable when it comes to having a child, but the meaning of that term isn’t necessarily what I once thought. “Being an emotional grown-up is practicing willingness to approach what is difficult and taking the difficult thoughts and feelings along for the ride,” she explains.

To get there, she says you must first “validate the difficult emotions of fear and doubt, … label them as such, and let go of judgments for having these feelings.” From there, she says to check whether your thoughts are true and if there is evidence to support them. The final step is to realize that you can only control your actions, so work to make sure you’re providing “environmental necessities” for good parenting, like arranging support and taking care of your own health.

In the month before I had my eldest, I took myself through a similar thought exercise at the recommendation of a friend who is also a counselor. I realized fairly quickly that I have a history of being great with children. When faced with becoming a mother at a time when I wasn’t necessarily planning on doing so, I was swift to take action, which included moving and changing my job around to allow for a work/life balance I believed would benefit my family. I now make enough money to live, even if I’m not and will never be “rich.” Yes, I still love eccentric outfits and ’90s video games. My distaste for a plain navy, gray, or white attire has not wavered. However, these things don’t hinder my emotional intelligence or ability to parent.

Even my struggles with anxiety and childhood baggage don’t do that. If anything, they’ve made me a stronger person with the capacity to get through the hard stuff.

This is something I further reflected on upon speaking to Dr. Kathryn Smerling, a leading family therapist based in Manhattan, who believes there might not be such a thing as being “ready” or “grown-up enough” to become a mother. “It’s a completely overwhelming experience filled with lots of wonderful feelings but mixed with doubt and insecurity,” she tells HelloGiggles.

When it comes to preparing, she notes that we shouldn’t underestimate the value of self-work and self-awareness. “The more you know yourself, the more you understand how to manage your own anxiety and your own feelings and the better you can parent a child,” she explains. When we sit with ourselves, our needs, and our emotional responses to stressful situations, we are better equipped to parent well (however we personally define that). 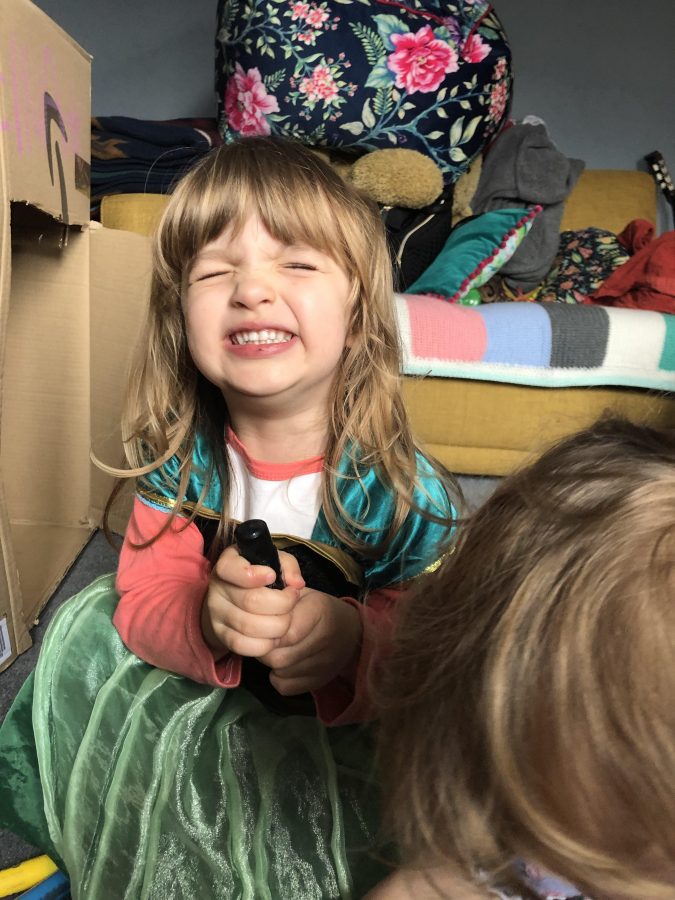 It’s quite possible that the things about me that are arguably more “childlike” actually bring a lot more to my parenting than the things I associate with adulthood. Of course, we all have to think about things like finances; saving for the future is a responsible and proactive thing to do, if and when it’s possible. While eventually owning a home would be awesome, it’s not something my 3-year-old and 1-year-old care about at this moment. They wouldn’t know the first thing about pension plans nor would they have the patience to sit still while I try to explain such a concept in toddler-speak.

My daughters don’t care if I dye my hair pink or wear a tutu out to the grocery store. In fact, they love that kind of thing. When I allow myself to embrace the kid within me, they’re at their happiest. We can build dollhouses out of cardboard boxes, watch silly cartoons, spot fairies in the forest, or pretend to be cowboys. In these moments, I know I have nothing to feel guilty about.