Kanye West’s initial return to Twitter was a little unexpected, but not entirely shocking. He’s working on several albums with artists like Teyana Taylor, Pusha T, and Kid Cudi after all, and West has a history of getting people talking on social media when he’s about to drop music. But this time around is…different.

When Kanye West, the son of a Black Panther and an English professor, debuted his solo project in 2004, I knew his ethical stances well. I remember watching the “Jesus Walks” music video and taking in all of its political implications. The song felt especially impactful because it was written by someone who looked like me, and thevideo detailed different aspects of Black life. Although West was much older than I was, I understood the message “Jesus Walks” was conveying because he had mastered the art of storytelling. Also, by tackling a topic like mainstream Black American faith (the narrative can be applied to anyone’s life, but this song speaks mostly to Black people), West had successfully tapped into a major aspect of Black thought and spirituality.

On his debut album The College Dropout, Kanye West allowed himself to become a mouthpiece for Black people, while also speaking directly to Black people.

On the track “Through The Wire,” he described what we believed he accomplished with his music — which was “explain[ing] the story [a]bout how Blacks came from glory and what we need to do in the game.” He wanted us to know who we were (flaws and all) and what had been done to us by oppressors. He wanted to chronicle common experiences and help us transcend the setbacks that threaten our livelihood.

A year later, following the devastation wreaked by Hurricane Katrina, West took the televised opportunity to share how the American government felt about Black lives at “A Concert for Hurricane Relief.”

In a passionate speech, he said the following: "I hate the way they portray us in the media. You see a black family, it says, "They're looting." You see a white family, it says, "They're looking for food." And, you know, it's been five days [waiting for federal help] because most of the people are black...those are my people down there....George Bush doesn't care about black people!

The political essence of his debut and his remarks about civil rights remained throughout his follow-up albums. But West’s infusion of Black Power into his music most strongly returned in 2013’s Yeezus.

Hearing “New Slaves” for the first time was an emotional sonic experience that conjured up images of segregated water fountains, illiterate slaves, and privately owned prisons. Throughout the album, West referenced racism in all its forms, and expressed that he refuses to let it overtake him. 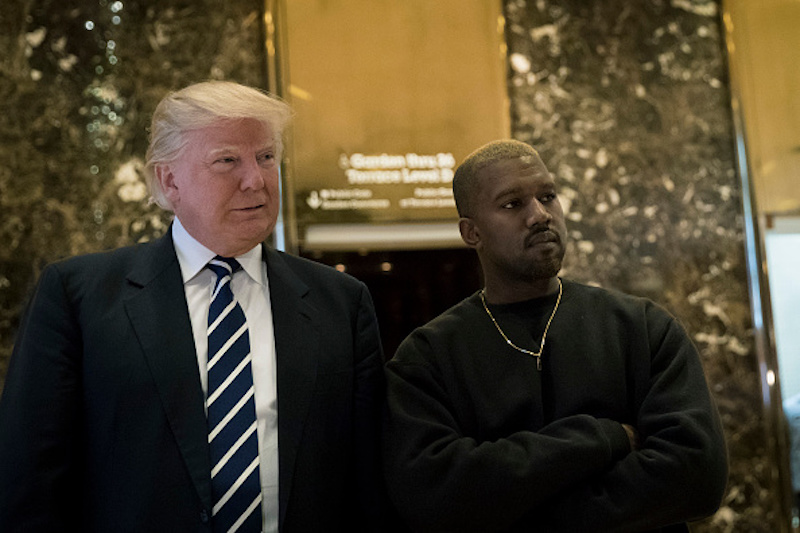 During a November 2016 concert, West announced that had he voted in the presidential election, he would have voted for Donald Trump. West then met with Trump weeks after he won the election, which completely alienated him from the Black people he once said a president cared nothing about. We knew that this wasn’t some publicity stunt or an ironic photo-op organized by West. This was a real meeting. With real consequences.

And that brings us to now.

West has shared many times over the past week, starting on April 21st, that he is a “free thinker.”

Freedom of thought, a lack of fear, and the inability to be manipulated are his reasons for why he can support delusional, dangerous characters like Donald Trump and Candace Owens — a fellow Black Trump supporter. Owens believes racism is a thing of the past, that Black people only need to give up their “victim mentality” to succeed (while completely ignoring documented and obvious systemic racism). If West has formed an alliance with her, it is reasonable to conclude that he has a similar take on racial inequality. false

Kanye is not the first famous Black artist to go off the deep end and make disturbing comments that represent an inability to distinguish between right and wrong — all under the guise of “free thought.”

A$AP Ferg declared that racism has “been over” and Pharrell Williams referred to himself as a “New Black”. Erykah Badu didn’t try to outright declare the fantastical end of racism in her interview with The Guardian earlier this year, but she did spew some nonsense about being able to see the good in Hitler because “I see good in everybody.”

All of these people are now privy to a level of wealth that they couldn’t access in their childhoods, leading them to believe that they have surpassed race (and basic common sense), and they now operate on a higher plane. But at the end of the day, they are Black people — and there is no surpassing that.

Fans of the film Get Out have likened Kanye West’s downward spiral to a permanent residency in The Sunken Place. For those who haven’t seen the movie, director and writer Jordan Peele describes The Sunken Place as “a brainwashing technique…made possible through a kind of hypnosis, which separates the consciousness of the victim from control of the body.” West’s perilous thinking suggests that his mind has been so altered by his reality, he believes he is no longer bound to his body — his Black body.

West himself has even poked fun at the idea of him being stuck in The Sunken Place, referencing it in many tweets. false

Though Kanye West finds it appropriate to make light of his comments and ideology, a large number of people who once looked to him for realness, representation, and guidance no longer can.

We can confidently say that his pseudo-philosophical ideas of “supporting-those-who-clearly-hate-you-but-use-you-for cool points” are not forward thinking. Instead, they are ignorant and a damning departure from what allowed us to love West so dearly in the first place. Hopefully, this trend of beyond-woke jargon and beliefs dies out fast. If it doesn’t, we are in trouble. Earth to Kanye.