Get ready, because it looks like this long lost “Game of Thrones” character is back

Game of Thrones has *never* been shy about getting rid of its characters. With shows that feature massive ensemble cast, writers and producers generally have to work overtime to  weave a dozen storylines and a million characters around the main plot so it’s unsurprising that some characters are entirely left out of episodes.

GoT has taken this a step further, dropping characters for an entire season (see: Bran and Hodor for all of Season 5) or killing them off in large numbers (see: “The Rains of Castamere” and “The Winds of Winter”). With the series wrapping up in a mere fifteen episodes, it looks like GoT is finally bringing back some of our favorite forgotten characters.

HBO recently released a behind the scenes look at the GoT costuming department we just happened to spot a beloved character — Needle. 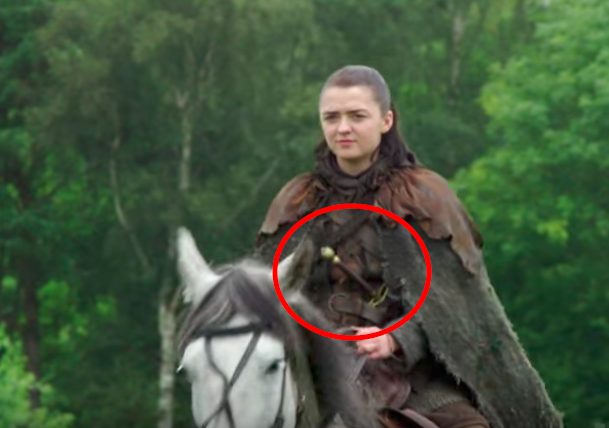 That’s right, Arya’s beloved sword, gifted to her by beloved half-brother/cousin Jon Snow, has returned. The last time Aria and Jon saw each other, it was waaaay back in season one, episode 2 when Ned Stark (RIP!) departs for King’s Landing with Sansa and Aria, while Jon makes his way to The Wall.

Seriously, it’s been a lifetime.

We last lost track of Needle in the middle of season 6 as Arya fled the House of Black and White and eventually left Braavos to seek her revenge on the people who’ve wronged her family. But Needle makes more than one appearance in the behind the scenes video. The video shows a member of the costume department holding Needle in a scene with Turner, whose character is at the Stark home of Winterfell. This means one thing: it looks like Arya Stark is *finally* headed back to Winterfell.

See if you can find Needle in the clip below:

We’re so happy to see Arya and Needle together again but the sword isn’t the only character we’re hoping to be reacquainted with. Arya and Nymeria, her dire-wolf, were also separated back in season one, episode two, and we haven’t seen the dire-wolf since. We’ve been holding out hope for the return of Nymeria as right now, only Jon’s wolf, Ghost, remains. We’re also hoping to see the glorious return of a character we haven’t seen since season 3 — when we saw him rowing off into the distance.

Gendry, the last surviving bastard of Robert Baratheon, hasn’t been seen since Ser Davos saved him from a horrible death. Joe Dempsie, who plays Gendry was spotted in Belfast last year, which means Gendry has finally hit land. With any luck, he avoids the same fate as Rickon Stark.

In just over a month, many of our questions will (maybe) be answered with the return of Game of Thrones on July 16th! We can’t wait to see Arya and Needle head north!