Logan Paul apparently made a lot of money off of his apology video, and people are outraged

After Logan Paul uploaded a video to YouTube that featured a dead body hanging in Japan’s Aokigahara forest, the internet collectively rallied to “cancel” him. He immediately deleted the triggering and mindlessly cruel video, apologized on Twitter, and then uploaded an apology video that reportedly was monetized. In the apology he called his original video a “severe and continuous lapse in judgment” and said “I should’ve never posted the video. I should’ve put the cameras down.”

His apology has garnered 29.2 million views (at the time of publication). And according to SocialBlade, it has already earned him somewhere between $14,000 and $116,000.

To get you up to speed on Paul and his YouTube career, Forbes estimates that he made $12.5 million in 2017 largely from YouTube videos like “surfing down the street on a giant Christmas tree” and “my first fist fight.”

Twitter is rightfully outraged that Paul has been able to profit off of a grave ethical mistake, and others condemned YouTube for allowing a platform where bad behavior is compensated. Some people demanded that he donate the proceeds from the apology video to charity.

Paul is apparently taking a break from videos at the moment and has not responded to the reported monetization of his apology video.

The entire YouTube ecosystems is a fraught one, with other YouTubers uploading their own “Logan Paul Reaction” videos and in turn making money off these clips. false 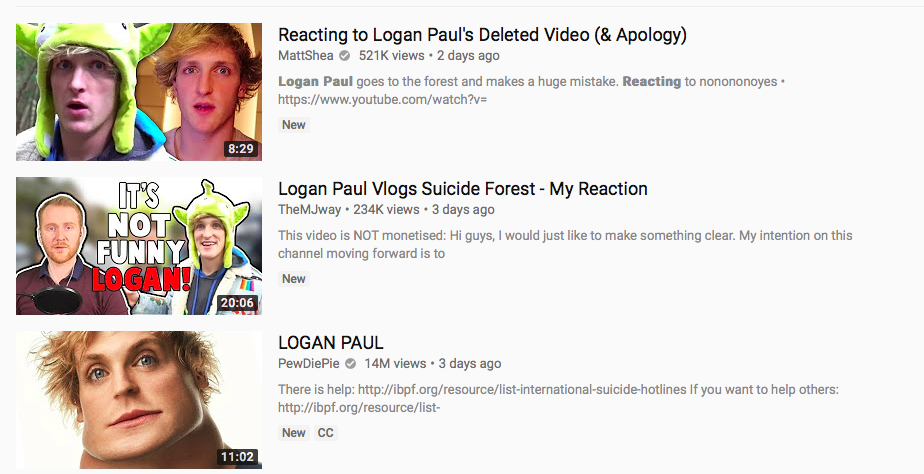 Hopefully YouTube steps in to adjudicate: our larger fear is that in a culture where videos clicks drive profit, others may see a “YouTube scandal” as a big payday with little personal consequence.