There is a fantastic Buzzfeed quiz called “Which Sprouse Is Destined To Be Your Spouse?” Genius, right? We took the quiz and got Cole, which is awesome because #JugheadForever, but apparently Cole Sprouse’s real-life girlfriend and Riverdale co-star Lili Reinhart also took the quiz, which is equally wild and meta.

Reinhart was browsing through Buzzfeed listicles last night and screenshotting them on her Instagram Stories when she stumbled upon the Sprouse Spouse quiz. Can you imagine running into your actual boyfriend on an internet quiz? Celebrities, they are truly not like us. Reinhart took the quiz and thankfully landed on Cole and not his brother Dylan, because that would have been drama. 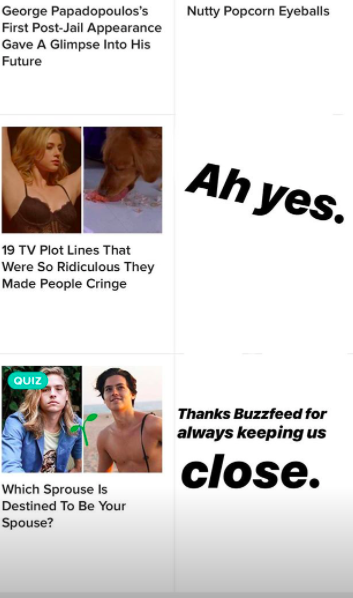 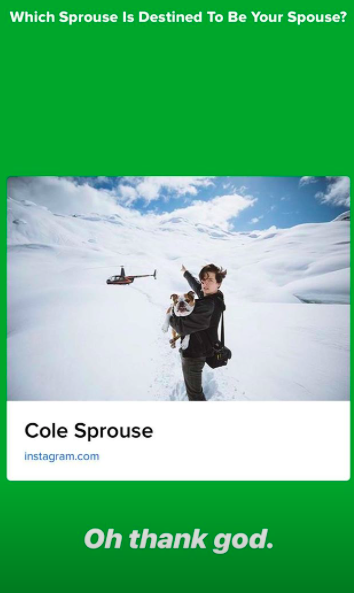 Lili and Cole were first rumored to be dating back in March 2017. They spent a good year trying to stay under the radar, despite the fact that Cole would constantly share the most swoon-worthy photos of Lili on Instagram.

In January 2018, Lili point-blank said she would never confirm or deny her relationship with Cole.

A few months after that statement, Lili decided to make their relationship Instagram-official at the 2018 Met Gala.

Since then, neither have attempted to hide their relationship and continue to share their love for one another on Instagram.

And now here they are, confirming their true love through a Buzzfeed quiz. What a ride.