At a time when women are constantly fighting for a safe space, whether it’s for equal pay or reproductive rights, we now have to be wary of how we navigate digital job boards. Professional platforms, such as LinkedIn, which are meant for networking and helping others move up in their industry, essentially warrants the same demeanor that women need to avoid men who don’t understand the word “no”—as if policing what we wear on a night out wasn’t enough. 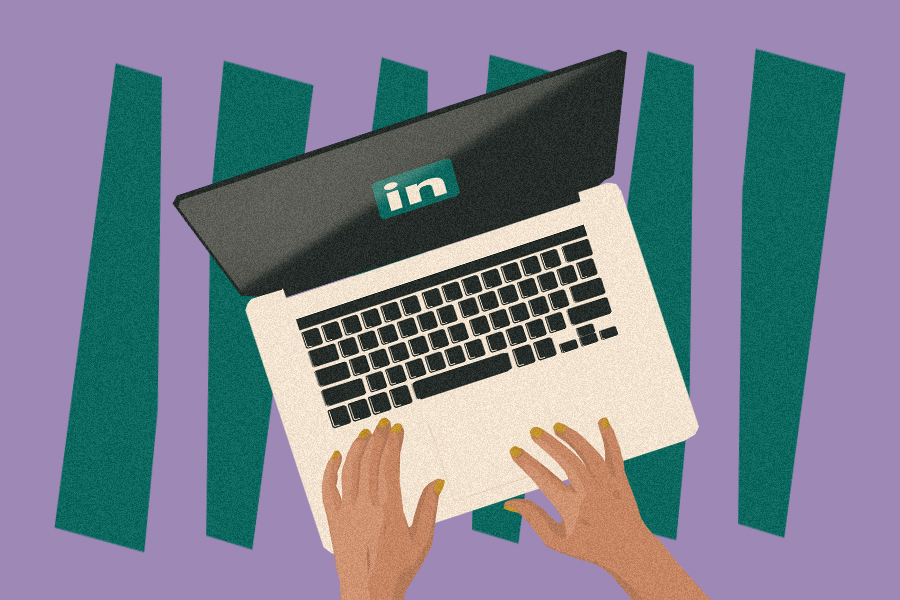 Self-dubbed “Sugar Daddies”—usually with a username like “David000436” and a host of money stock images in their arsenal on social networking platforms—have spilled into LinkedIn, an employment-oriented service, where it seems employment is the furthest from their minds.

LinkedIn has 630 million users, 57 percent of which were male as of May 2019. While some men use the platform for professional reasons, others are finagling their way into the private messages of young professional women to seek romantic connections. Frankly, opening a message from a VP or CEO of a company in the hopes that he’s reaching out to extend a job opportunity or endorse a skill that doesn’t involve your body, only to see a man inquiring about your relationship status or physical appearance is disheartening.

In 2015, LinkedIn introduced a new messaging experience, which features a chat-style interface with the purpose of exchanging messages easier. With the launch, it introduced stickers, emojis, and GIFs to “insert a little extra personality” and expanded its chat features with location sharing and attachments in 2018, according to LinkedIn’s official blog.

But could implementing features of social networks in professional platforms convey to users that their interactions with each other should be more relaxed? Possibly, but women shouldn’t have to defend their hair and attire choices or continuously ax the advances of men when they’re trying to advance in their careers.

In a now viral thread, Twitter user @geologiststephy shares an exchange on LinkedIn with an engineer from Chevron, who messaged her to tell her he found her hair color “unprofessional,” while not seeing how unprofessional and inappropriate his unsolicited comments were.

He went on to say her hair color was unprofessional and name-called her numerous times, while simultaneously stating that he wasn’t hitting on her. Due to the exchange, another Twitter user tagged LinkedIn’s Help account, and a representative responded with their disapproval, including a link to report such behavior.

As I combed through Twitter to see if many women had shared this same experience, I found that so many women seeking gainful employment had been bypassed for jobs. Instead, they were denounced as sluts and approached by men who thought it would be interesting to connect after viewing their profile picture and not their résumé.

One Twitter user expressed frustration that her abuser requested to connect with her on LinkedIn, even after she blocked him on all other platforms. Simply put: Being the cause of someone’s trauma, stalking them, and offsetting their healing on multiple platforms is disgusting. The idea that this approach would even be remotely appropriate is beyond problematic, and this abuser wasn’t the first to partake.

In 2013, Anna R, a recent graduate, quit her job after her superior sexually assaulted her at work. After countless flirtatious and threatening voicemails from her ex-boss, she blocked him on all social networks. The one platform that didn’t have a block feature was LinkedIn. Her abuser continued to stalk and harass her—sending her messages, inquiring about her location based on new connections and visiting her page, and if you’re familiar with the career-oriented platform, then you know it sends a notification for profile views.

Anna went on to create a petition after failed attempts at seeking help from LinkedIn, whose representatives told her that her only option was to file a court order against her abuser. After Anna’s successful petition, LinkedIn would introduce the block feature a year later.

There are a host of dating apps for those seeking everything from relationships to casual sex and new friends. Apps like The League have successfully connected like-minded people for dating, careers, and higher education—but that still seems to be outside of the scope of men on LinkedIn who don’t appear interested in bonding on mutual ambitions and goals.

The real deal is that there is no place for creepy unwarranted advances, unsolicited comments, or harassment from men.

Somewhere along the way, men’s entitlement to women, their bodies, and their time has only grown. Whether that began with #MeToo or having the leader of the free country supporting grabbing women by the p*ssy, I’m not sure, but what I do know is that LinkedIn is not for anyone’s advances. While the platform should be used to jumpstart and elevate careers, men are making it their personal dating app and parading around their titles as a power dynamic to entice young women, many of whom don’t need their help and simply are not interested. So while they continue to prey on women, I can only hope they continue to swipe past these women on Tinder and in real life, too, as it’s clear we can’t count on them to understand the word no.